The part of Ireland where my great-grandparents came from isn't the Ireland you see in travel guides. In fact, the guides hardly spend time on County Cavan at all, except for mentioning that it's good for fishing and has one really, really great restaurant.

Compared to the rest of the country, Cavan, located at the border with Northern Ireland, doesn't have much to offer in terms of tourism. In Gaelic, its name means "The Hollow.” But it was about 30 euros for a bus ride from Dublin, so I decided to take a day trip while I was visiting the city.

I accompanied seven or eight others on a bus from Dublin early on a Sunday morning. We passed through the run-down row homes on outskirts of the city and along a highway through flat countryside. In County Meath we saw the Ireland of postcards – the quaint, colorful, hilly towns and the tiny shops with Celtic knits and Irish flags in the windows. Much of it looked about the same as central Pennsylvania in the US, where I come from, except with more sheep and more elaborate fences of small rocks and shrubbery.

Along my journey, I wondered how visiting the home of my ancestors would make me feel inside. Maybe I would feel more complete. Maybe I would learn something about myself. Maybe it would turn into a spiritual experience that I could write about to further my career.

But I doubted all of these possibilities. Dublin had had little impact on my self-discovery, and I began to suspect that only abstractions of my ancestry remained in this country – such as Carroll's, a cheesy gift shop chain that I decided not to enter. I tried to drink room-temperature Guinness but couldn't finish half a pint. I strongly disliked traditional Irish foods, such as "black pudding," which is unfortunately not pudding but cooked blood.

Thus, any hope for personal fulfillment rested on Cavan.

A few hours later, our bus emptied in an area that was so normal and non-touristy, it made me feel uncomfortable, and then I began to feel guilty for feeling uncomfortable in my ancestral homeland. I had no idea where to go, so when I got to the nearest main street, in what seemed to be the main town, I took a left.

I passed various buildings that looked like shops and restaurants, but they were closed. I walked through the streets and found a historical society that advertised that it had ancestral records, but it was also closed. I realized that like my great-grandparents, Cavan was devoutly Catholic, and I'd chosen to visit it on a Sunday.

I walked, searching for an approachable-looking person or shop. That turned out to be a middle-aged man named Henry.

While I do not suggest this and probably in the future will never do it again, I decided to take a chance and accepted Henry's offer when he asked where I was from and invited me into his shop for tea.

Henry used to live in New York City. He liked it and was in love with a woman there, but things didn't work out. After some visa problems, Henry returned to Cavan. We chatted about Irish bands and life in America. I told him the story of my great-grandparents, which probably did not seem as special to him as it did to me. I asked him if many tourists came through Cavan. "Eh, you know," he said. "Not too many."

After some time – a period which included casual marriage proposals from both Henry and his older friend – a younger man named Gabriel showed up. It was then that they informed me I had wandered to a taxi cab company.

"You know, Gabriel has to pick up a client," Henry said. "Why don't you go with him?"

Again, don't accept rides from strangers. But ten minutes later I was sitting in a cab with Gabriel and the client. Together, we explored the border between the Republic and Northern Ireland.

Gabriel showed me the memorials of places where loyalists and Irish nationalists had traded bombings, one of which had killed two young girls. Every so often, he'd stop the car and he'd take my picture in front of something that he thought looked Irish, sites that included the County Cavan road sign, thatched-roof cottage and a farm cow. "Your great-grandmother probably grew up in a house like this," Gabriel told me. Or, "Here is an Irish cow."

Upon returning to Cavan town, I bid Henry and Gabriel farewell and got back on the bus. A few minutes out of Cavan, the bus passed a huge yellow church built next to the Lower Lavey Inn.

I don't know much about my great-grandparents, except that they emigrated separately from Ireland, met in Philadelphia and realized they'd grown up about 10 minutes away from each other. They returned to get married at the Lower Lavey Church. When they got back to America, they had nine children, including my grandfather.

He always used to tell me about his mother, Susan, a woman with dark hair and dark eyes that passed through my grandfather to my father to me. My grandfather’s mother played the piano; so did mine. I had only a few seconds to take a picture of what I guessed was the church in which my great-grandparents got married, so I could show my grandfather, who never went to the country his parents were born in. But the bus was too fast and a few hours later I was back in Dublin.

Travelers from Egypt to France should provide PCR certificates 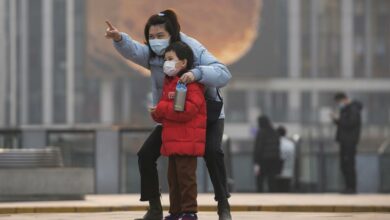 Travel curbs aimed at COVID variant tighten across the world