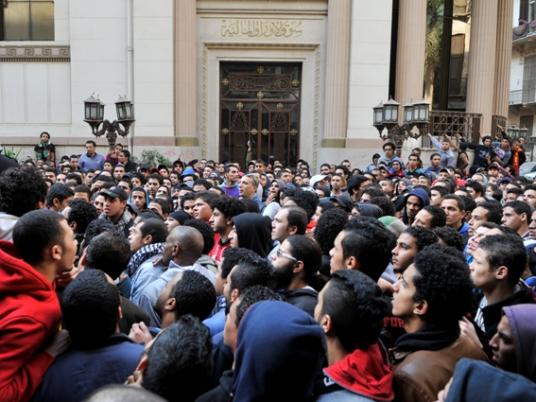 Promises of "retribution or chaos" are sprayed in graffiti on the walls of central Cairo and its metro stations, signed by the Ultras Ahlawy ahead of 26 January, when a decisive verdict in the Port Said massacre is due.

In February 2012, members of the Ahly football fan club were attacked by fans of Port Said's Masry club and, some say, a group of unknown assailants, after the Egyptian National League game between the two teams.

Out of all the violent incidents that took place during the country's transitional military rule after President Hosni Mubarak stepped down, the Port Said massacre brought the highest death toll. Since then, most football activities in Egypt have been suspended and in recent days, ultras members have escalated protests demanding retribution.

The verdict is expected just a day after the second anniversary of the 25 January uprising. On Friday, the day-long protests commemorating the revolution with marches denouncing the rule of the Muslim Brotherhood's political arm and President Mohamed Morsy turned violent at night in cities across the country.

At least eight deaths were reported in the city of Suez, according to Al-Masry Al-Youm, and more than 380 injuries were reported nationwide — most in the same city.

Despite heightened security, Saturday is likely to be another violent day, and rumors have abounded of a possible delay in the court verdict as an attempt to quell the mounting anger. The Public Prosecution's request this week to reopen arguments and enter new evidence has also fueled speculation.

During several protests Ultras Ahlawy protests and on the club's Facebook page, members have pledged that if the verdict does not bring "retribution for the mothers of the martyrs," then authorities should expect the "anger of the ultras and ensuing chaos that will pervade the country."

On Wednesday, within the span of about four hours, hundreds of ultras organized a roving protest around central Cairo. They began with a sit-in in front of the old stock exchange building, then blocked a central metro line, and later, they halted traffic on the 6th of October Bridge.

The group said in a statement on its Facebook page that "26 January will be a decisive day in the lives of many people."

The violence broke out last year on 1 February at a match between Ahly and Masry football teams when Masry fans stormed the pitch after their team's victory and attacked rival fans. But many, including the Ultras Ahlawy, have at least in part blamed security forces for the violence.

Ultras played an instrumental role during the 25 January revolution, as well as in mobilizing protests during the transition period.

From a legal perspective, the case itself is quite complicated, and no matter the outcome, one of both camps will likely be furious.

The fate of the 73 defendants facing trial is surrounded by mystery and confusion for the different parties involved: the families of the victims, the people of Port Said and the defense team of the accused.

The former group will not accept a verdict short of across the board convictions, while defense attorneys are fighting for acquittals, arguing that the assault on Ahly's fans was carried out by infiltrators from outside the city.

Indicators point to a possible delay in the ruling to head off the protest momentum of the ultras and other revolutionary movements, but also for legal reasons, namely the absence of the accused from the courtroom. The interior minister said earlier this week that the court had agreed the defendants would not be transferred from Port Said to Cairo for the verdict in order to prevent violence from breaking out.

The judge could also say 'extraordinary circumstances' call for a postponement.

On Monday — with five days before the sentencing date — the prosecutor general presented a memorandum requesting that the court consider new evidence, allow arguments to be reopened and add six defendants to the case based on the recent report of a government fact-finding committee.

The court now faces several possible scenarios: accept the prosecution's request, in which case the proceedings on both sides would be reopened, or refer the entire case back to the prosecutor general to conduct investigations anew. Another possibility is for the court to reject this new evidence and to issue the verdict according to the proceedings thus far.

"This is a major event," saws lawyer and former parliamentarian Mohamed Anwar al-Sadat. "There are political and economic pressures on the country and on the ruling regime. A political maneuver with the aim of avoiding the possibility of angering the people is inevitable."

He says that while the prosecutor's request is legally permissible, "the question now is the value of this evidence. It is feared that the introduction of evidence is only motivated by a desire to pressure a postponement in the verdict. I was part of [an earlier] fact-finding committee formed by the People's Assembly [which has since been dissolved] and we did not prove the involvement of any other parties in the case."

The prosecution's new evidence came to light after a report submitted in December by a fact-finding committee formed by Morsy last July to investigate violent incidents and protester deaths that took place between 25 January 2011 and 30 June 2012 — the period from the start of the uprising until Morsy was sworn into office.

Although members of the committee described the prosecutor general's evidence as weak in statements to the media, they also doubted that their conclusions could be used merely for the purpose of easing political pressure on the regime.

Ahmed Ragheb, director of the Hisham Mubarak Law Center and member of the fact-finding committee, told Al-Watan, a privately owned newspaper, "I feel that the decision of the prosecutor general to send the committee's complete report to the court was out of a desire to force the court to repeat the procedures of hearing the case, fearing the reaction that might ensue after the sentence."

Taqadom al-Khateeb, a political activist and also member of the committee, says the new evidence may change the outcome.

Khateeb tells Egypt Independent: “If there is political will from the side of President Morsy’s regime to reopen investigations in the case, I expect new names and facts to be revealed."

He refused to disclose the identities of the new defendants or to reveal the content of the new evidence, but according to media reports, defendants include former members of the disbanded National Democratic Party.

Port Said Inspector Khalid Mohamed al-Namnam is among nine high-ranking security personnel who top the list of defendants, namely Essam Samak, the head of Port Said's Security Directorate at the time of the tragedy.

Those following the case from the start see things differently.

Safwat Abdel Hameed, head of the Port Said branch of the Lawyers Syndicate and member of the defense team for the accused, says the evidence in the case has been weak from the start and is insufficient to incriminate the Port Said residents.

Abdel Hameed says, "Forensic reports prove that most of the victims died as a result of suffocation as they scrambled to find an exit. This means that there was no intention of murder on part of Masry fans, and that the charge of premeditated murder leveled against them has to be changed to an accusation that has to do with rioting and disturbances or something of the sort."

"It could not be proven that there was an agreement among the defendants to carry out the crime that happened on the spur of the moment," Abdel Hameed says.

He expects many defendants to be acquitted and a few to receive sentences that range from 10 to 15 years, that is, if there's sufficient proof to tie their attack on protesters to the deaths.

"The arrest of the defendants took place days after the match in a random manner and depending on the initial investigations of the police. I don't know why they would include this evidence now, only days before the verdict. The report of the fact-finding committee has been ready for around a month; this is just an attempt by the prosecutor general to postpone the verdict in order to avoid a crisis on the streets of Cairo or Port Said.

"It could have been presented by the persecution in the shape of an appeal on Saturday's ruling," he says.

Manal Mostafa, member of the defense team for the victims, rejects this view.

"One week before the game, there were threats by Masry fans that Ahly fans coming from Cairo will meet their death," she says. "How can you perceive that there was no intention of murder?"

She adds that police are also complicit as evidenced by two points. The first is the failure of Central Security Forces to deter Masry fans from going down to the pitch and cross to the Ahly side.

The second, and more important, she says, is the conduct of one of the officers.

"Mohamed Saad, among the defendants, closed the emergency exit door located behind the seats of Ahly fans before the end of the game for no apparent reason. This act facilitated and accelerated the mission of the assailants and ended the victims' hopes of reaching the emergency exit," she says.

The Port Said Criminal Court accepted the request of the Interior Ministry not to transfer the defendants from the Port Said prison where they are currently being held, to Cairo where the trial proceedings have been ongoing at the Police Academy since April, coinciding with the tail end of the Hosni Mubarak trial at the same venue.

Families of the defendants are continuing their sit-in in front of this Port Said prison, setting up 40 tents there to guarantee that the ministry does not rescind on its decision to keep the defendants away from Cairo.

Ali Spicy, member of the Ultras Green Eagles, supporters of Masry Club, says, "The Port Saidis are not people who commit acts like this. They don't kill anyone. I am sure there are people who infiltrated the crowds.

"I was present during the game and I left only a short while before it ended. My colleagues told me that there were strangers sitting among us and that they were the ones who went down to the field to beat up Ahly fans."

He adds that any verdict other than an acquittal would result in a request by residents of the governorate for a symbolic secession from Egypt.

Ali Mohsen, father of martyr Omar Mohsen, says, "Regardless of the identity of those who committed the murder, the result is that my son is dead and someone must have surely killed him.

"I have a feeling that this case will not end this way. If I don't get my son's rights, I will accuse those who were in charge of the country at the time. I will accuse Field Marshal Hussein Tantawi as one of those responsible. I feel that this case is bigger than just the 73 defendants and that something is still hidden. 26 January may just be the beginning of the case."