The uprising in Libya, which has reached its ninth day with more than 1,000 feared dead, has shown the persistent fragmentation within the European Union.

EU Foreign Policy Chief Catherine Ashton condemned “the repression against peaceful demonstrators and deplore[d] the violence and the death of civilians” on Sunday February 20, after seven days of deadly clashes between anti-government protesters and Libyan security forces.

The European Union’s 27 foreign ministers met to discuss the crisis in Libya on Monday, expressing their common fear that unrest would spur many more migrants to attempt the crossing from North Africa to Europe. But the agreement ended there, with members releasing individual and discordant statements.

According to the Italian news agency ANSA, Italian Minister of Foreign Affairs Franco Frattini, upon his arrival at the Council of Foreign relations in Bruxelles, said that “the national reconciliation process must begin in a peaceful way leading to a Libyan Constitution; this would be a fundamental goal.”

After the meeting with Arab League Secretary General Amr Mussa, which was held in Cairo on February 23, Frattini expressed concern that a civil war would erupt in Libya and result in an “epochal flow of migration towards the European countries.”

Italian Prime Minister Silvio Berlusconi, who at first declared he did not want to “disturb” the Libyan leader Muammar al-Qadhafi, condemned the violence against the Libyan citizens on Monday, 21 February. After this statement, a phone call between the North African ally and Berlusconi followed, during which the colonel apparently reassured the Italian leader, who was calling on the violence to end.

Germany and France have been the latest countries to denounce the repression of the anti-government protesters. On 23 February, French President Nicolas Sarkozy urged the European Union to impose sanctions against Libya, condemning the “brutal and bloody repression” of those protesting against the 42-year rule of Qadhafi, and said the international community “could not remain a spectator.”

In agreement with the French President, Angela Merkel, chancellor of Germany, confirmed that if the Libyan government did not stop the violent repression, “we [EU] would then speak in favor of sanctions against Libya.”

The European community had the same late reaction to the uprising in Egypt, which ended with the toppling of former President Hosni Mubarak.

Libya has Africa’s largest oil reserves and the 8th largest in the world. European countries look to Qadhafi’s Libya not only for its oil and gas supplies, but also as an alley against African migration to Europe, and as a guarantee against the creation of an Islamic state.

Many of the European states have established strong economic and political relationships with Libya’s leader after the end of the Lockerbie crisis in 1997, after Libya was identified as the culprit in the 1988 bombing of an American aircraft over Lockerbie, Scotland.

As Maurizio Ambrosini, professor of sociology of migrations at the University of Studies in Milan, told Al-Masry Al-Youm, “All the European members, and particularly Italy, had developed a softening policy by redeeming Libya’s accusation of being a rogue state, by blaming the officials who arrested Qadhafi’s son in Switzerland and by releasing [Abdelbasetal Maghrahi] the convicted Lockerbie bomber, in UK. All this happened for economic interests and for Libya’s role of gendarme of the southern coasts of the Mediterranean Sea.”

Northern Europenations, according to Comelli, have weaker cultural and economic ties with the southern Mediterranean countries; thus, they have a tougher stand on human rights due to their distance and weaker economic relations with these countries. On the contrary, countries like France, Spain, Italy, Cyprus and Malta have stronger cultural and economic affiliations, with a consequently stronger political impact, making them more reluctant to take a hard line against the current repression.

“The delay of the European Union does not have justifications and it is due to several problems,” Comelli said, citing the diversity of views and interests among the member countries, and the lack of leadership capacity of Ashton among other problems.

Comelli said Ashton “proved to be very indecisive and more cautious than her predecessor even when she needed to release immediate statements on behalf of the European Union.”

The EU’s foreign policy reactions also depend on the country in question, he said. “The answer of EU to the elections in Belarus, for instance, has been far more prompt and resolute. One of the causes is the European countries’ fear of the victory of a fundamentalist Islamic party in future elections, and the repetition of what happened in Algeria in the 90s with the victory of the Islamic party. Thus, they tend to support authoritarian leaders who can guarantee stability to the detriment of democracy.”

According to Eurostat, the Eu’s Luxembourg-based statistics office,“The dependency of the EU on energy imports, particularly of oil and more recently of gas, forms the backdrop for policy concerns relating to the security of energy supplies. Indeed, more than half (54.8 percent) of the EU’s gross inland energy consumption in 2008 came from imported sources.”

Italy, the European country with the strongest economic and political ties to Libya, imports 25 percent of its oil from Libya, and 10 percent of its gas; in 2009, Italy bought 49 percent of Libya’s exports to the 27-nation EU, while Germany bought 14 percent.

According to Nicolò Sartori, an analyst who specializes in energy policy at Rome’s IAI, “In the short term and in these critical conditions, it is highly likely that the production of Libyan oil and gas will collapse. In terms of global market, this results in a rise in prices,  which we are already experiencing, and a tightening of the market.”

The supply of gas to the Italian island of Sicily through Eni SpA’s greenstream pipeline under the Mediterranean Sea was temporarily suspended on 22 February, the company stated.

“However I do not think there will be major problems with supply,” Sartori explains, “Libya produces about 2 percent of world oil: the current spare capacity should be able to meet the non-Libyan output, as Saudi Arabia seems willing to increase its production. As for gas, the Libyan production is 0.5 percent global output. In a situation of oversupply, I do not think the Libyan gas might affect that much, despite the rigidity of the market. However, the increase of the oil price might influence that of gas.”

Sartori predicts that the same scenario would interest Italy since “The market is fluid and global, and each country should be able to find the necessary resources. The problem may be more relevant to the case of gas… but it seems that the reserves currently in storage and the ability to obtain supplies from north Europe guarantee a certainty in terms of supply.”

Migration flow, the EU’s other main concern, decreased to the southern coasts of Italy by about 90 percent after April 2009, following the closure of the port on Lampedusa Island and an agreement between Italy and Libya.

“Human rights organizations as well as the European Council on Refugees and Exiles (ECRE) have been very critical of the agreement brokered between Italy and Libya,” Agnes Czajka, assistant professor at the Center for Migration and Refugee Studies at the American University in Cairo, told Al-Masry Al-Youm.

“The agreement is deeply problematic, and as many have argued, puts Italy in violation of its international obligations to asylum seekers.  The Libyan government’s record in relation to refugees and asylum seekers is appalling, and the current conditions in Libya put refugees, asylum seekers and migrants presently in the country in an extremely vulnerable position.”

Therefore, Czajka said, “Italy and other EU countries have an obligation to civilians attempting to flee to safety, whether they are Libyan citizens or migrants, refugees or asylum seekers presently in Libya.” 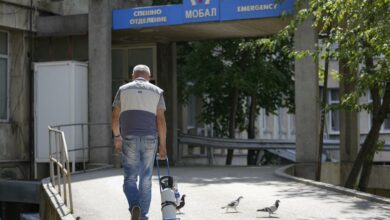