A Spanish archaeological mission working in the Bahnasa Archaeological Area of Minya Governorate, Upper Egypt, discovered two adjacent tombs dating back to the Saite period, the Twenty-sixth Dynasty of Egypt. 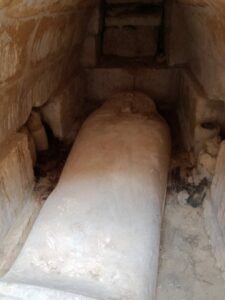 The Secretary-General of the Supreme Council of Antiquities, Mostafa Waziri, said that the mission also uncovered the remains of two unknown people with gold tongues. 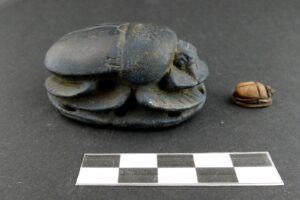 Inside the tomb, a coffin was found made of limestone with a cover in the form of a woman, with the remains of an unknown person.

Waziri pointed out that preliminary studies showed it had been entered before during ancient times. 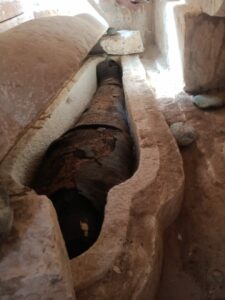 The head of the Spanish archaeological mission said that the second cemetery was completely closed and the mission opened it for the first time during excavations.

A professor at the Department of Greco-Roman Archeology at the Faculty of Archeology, Cairo University, and the director of the mission’s excavations, Hassan Amer said that the mission found a limestone sarcophagus with a human face in a good state of preservation, in addition to two small windows with canopic pots inside each of them, 402 Ushabti figurines made of faience, and a set of small amulets and green beads.

The Director General of Central Egypt Antiquities, Gamal al-Samastawy, said that the Spanish mission has been working in the Bahnasa archaeological area for nearly thirty years, during which it found many tombs dating back to the Sawy, Greco-Roman and Coptic eras. 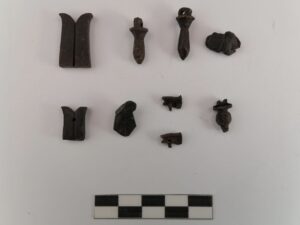 He pointed out that the Bahnasa region was famous for its papyri written in Greek, which were published in dozens of volumes at the University of Oxford, and that it belonged to the nineteenth region of Upper Egypt and had great fame in the Coptic and Islamic eras. 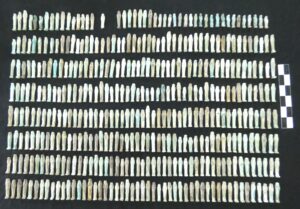