Snowfall on Saint Catherine city in South Sinai led to an unprecedented increase in tourist occupancy rates to the city, after photos and videos circulated on social media showing people playing in the snow. Hundreds of tourists flocked to Saint Catherine to see the snow, which began melting in the streets on Saturday but continued on in the mountain tops. 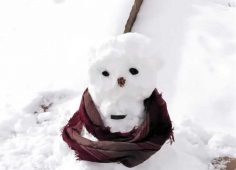 The head of the municipality council of the city, Talaat al-Anani, said that all roads are open and that this snow has brought great exhilaration to the city. 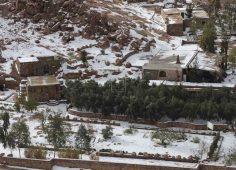 A young resident of the city, Saleh Awad, said that snow is one of the city’s best attractions. He urged the Egyptian Meteorological Authority to anticipate snowfall times and announce it early on, allowing tourists and lovers of snow to visit Saint Catherine on time.

The city of Saint Catherine is located in the Sinai peninsula at an elevation of about 1600 meters from sea level, at the foot of the Sinai High Mountains.

It is a popular tourist attraction, as it features the oldest continuously inhabited monastery in the world built on a site revered by followers of the three Abrahamic faiths – Judaism, Christianity and Islam.