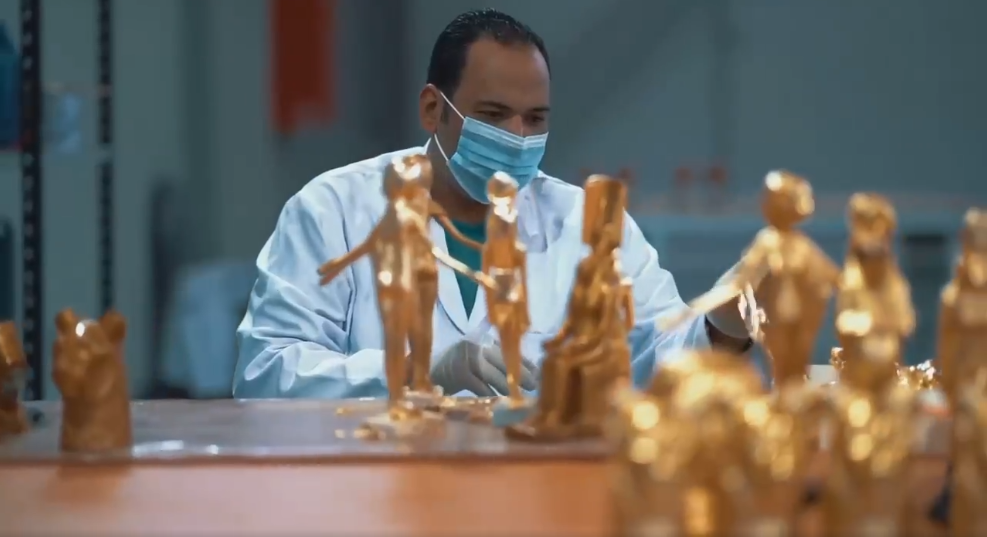 Minister of Tourism and Antiquities Khaled al-Anany has inaugurated the first factory dedicated to creating archaeological replicas in Egypt and the Middle East.

Located in Obour City, the factory was established in cooperation with the “Kenouz of Egypt for Archaeological replicas” company.

Anany explained that this was a vital step, and expressed his pride at the project’s successful completion after it was started a year and a half ago. It aims to keep keep the pace with the local and global market’s needs for manufacturing archaeological replicas, and will be worked on by highly competent Egyptian artists and specialists.

The minister assured that first and foremost the purpose of this project is not commercial, but instead seeks to introduce Egypt’s industry to the world while protecting its cultural heritage and the property rights of its artifacts.

All replicas produced in the factory will have a special stamp of approval from the Supreme Council of Antiquities, he explained, with a certificate to show it is not an authentic artifact but one produced by the ministry. A barcode present on each product will display this information in English and Arabic, alongside other details such as he material it is made of, the weight, name and place of display of the original piece.

Archaeological replicas are among the important products marketed in the tourism sector, the minister said, which reflects the world’s interest in them. He implied that the production of these replicas comes from the requests of tourists eager to have them as valuable souvenirs officially endorsed by the state.

Anany explained that these replicas will be made available to various hotels and tourist bazaars at special prices, and that the factory can also manufacture for museums around the world.

The first official sales outlet for these reproductions will be opened in the National Museum of Egyptian Civilization by April 4, he announced, following the museum’s official opening and the transfer of the royal mummies.

Official sales outlets for these reproductions will be available in all governorates, museums and markets in the near future, he added.

Several of these products will also be exported outside Egypt and will also be included in foreign exhibitions.

According to Anany, the factory employs about 150 experienced artists, restorers and craftsmen employed by the ministry.

The Chairman of the “Kenouz of Egypt for Archaeological Replicas” Hisham Shaarawi said that the factory was finished during the end of 2020 and has already produced 6,400 pieces during a trial run. These include products made of wood, ceramic, stone, metal alongside various replicas of King Tutankhamun’s treasures.

The factory covers a total area of 10,000 square meters and is equipped with the latest technologies. It features manual and automated production lines for casting metals to efficiently produce metal products, a line for wood and carpentry and a line for molds.

It also includes departments for sculpting, printing, ceramics, packaging, drawing and coloring, which include the production of colored glass and t-shirt printing.

In addition, the factory features an exhibition hall to display the replicas.

Several of the technologies the factory utilizes include manual and automated manufacturing machines, a metal casting line, a machine for making forms and metal molds, a laser machine for engraving and metalwork, machines to help with design-work and printing and robots used to carve solid rock masses such as granite, basalt and more.

Egypt has held an interested in producing its own archaeological replicas since 1982, when the Art Revival Center was established as the start of a state project to create replicas. The Supreme Council of Antiquities later in 2010 inaugurated an archaeological unit for replicas at the Citadel of Salah al-Din in Cairo, where its replica unit worked tirelessly to produce artifacts identical to the originals.

The Art Revival Center was then merged with the citadel’s replica unit, leading to the Kenouz company.