Egyptian Health and Population Minister Hala Zayed announced that it has received 1,766,400 doses of the AstraZeneca vaccine at Cairo International Airport on Friday evening, as part of the COVAX initiative in cooperation with Gavi, the Vaccine Alliance, the World Health Organization and UNICEF. This comes as part of the government’s plan for providing a further variety of vaccines to its citizens.

A statement by the Health and Population Ministry said that this latest shipment is the third from the COVAX initiative, and part of a total of 40 million doses to be received successively during the coming period.

The statement confirmed that the shipment of vaccines will be subject to analysis in the laboratories of the Egyptian Drug Authority. The statement confirmed the availability of the AstraZeneca, Johnson & Johnson, Sinovac, Sinopharm, and Sputnik V vaccines in all vaccination centers across the nation, and stressed the government’s desire to cooperate with various international bodies to provide a variety of vaccines. 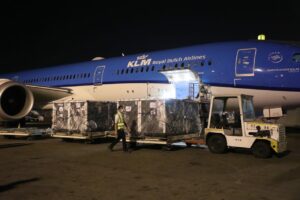 AstraZeneca said in a Friday statement that it had delivered the new shipment of the vaccine to Egypt through the COVAX global initiative.

This initiative is led by the Coalition for Epidemic Preparedness Innovations (CEPI), Gavi, the Vaccine Alliance, (formerly known as: the Global Alliance for Vaccines and Immunization) and the World Health Organization, in cooperation with government agencies and vaccine manufacturers.

The statement said that the initiative is working to accelerate the development, production and distribution of COVID-19 vaccines in a fair manner around the world, and so far, one billion doses of AstraZeneca vaccine have been provided to over 170 countries – which constitutes about two thirds of the vaccines provided through COVAX initiative until now. 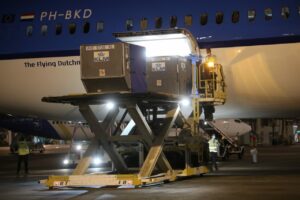 The CEO of AstraZeneca Egypt Hatem al-Werdany said: “We are pleased to witness the arrival of additional doses of the AstraZeneca vaccine against the Coronavirus to Egypt, which offers new hope for its people.”

Egypt and Cyprus sign memorandum for the electrical interconnection

Egypt receives more 1.6 million doses of Pfizer vaccine in second shipment from US