Egypt’s Treasury and Mint Authority has unveiled a set of medals celebrating modern patriarchs of the Coptic Church in Egypt.

Authority Head Hossam Khedr announced Monday that the first medal of the set is dedicated to Pope Cyril VI of Alexandria, a saint of the modern era, on the occasion of the 50th anniversary of his death.

A statement by the Finance Ministry said that the medal is a personal portrait of Pope Cyril VI, with his name written in the Coptic language on the front.

On the bank is a famous saying of his, “Pray every time”, next to which is a picture of St. Mark’s Cathedral established during his reign. Khedr explained that the second medallion comes to celebrate the 50th anniversary of the sitting of the late Pope Shenouda III, Pope of Alexandria and Patriarch of Saint Mark Episcopate.

The medal has a personal portrait of him written in the Coptic language, with one of his famous phrases on the back: “Egypt is a homeland that lives in us,” next to an engraving of the papal headquarters established during his reign.

The third medal is of Pope Tawadros II, Pope of Alexandria, depicting a portrait of him and on the back a picture of the Cathedral of the Nativity of Christ.

Finance Minister Mohamed Maait stressed that the Treasury and Mint Authority spares no effort in documenting Egypt’s political, economic and religious memory through the unique designs of the most important historical events in various fields, represented via commemorative coins.

He explained that this will help in developing awareness and preserving the national identity of Egyptians, helping to immunize them against any attempts to lead them astray. 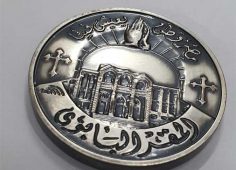 The authority cooperated with the Papal Headquarters in the Cathedral and the Institute of Coptic Studies to select the most appropriate imagery and phrases to represent the Coptic leaders, he added.