I reject the return of any of my photojournalists to the site of the clashes in front of St. Marks Coptic Orthodox Cathedral in Abbasseya. I already breathed a sigh of relief with the safe return of Aly and Rafy from there. Two martyrs and 49 injured people so far, at least three of them reporters. Our colleague Bishoy lies in the intensive care unit at the Coptic Hospital.

Sectarian strife? The people against the people, once again in clashes that do not differ from the bloody clashes that erupted in Moqattam weeks ago and the Ettehadiya Presidential Palace clashes before that. We register the incidents and stifle our bitterness over the lack of vision and tell ourselves over and over that the revolution is continuing — against injustice.

But it is also injustice to send one of the photographers to face danger on his or her own with poor camera equipment that will not produce photos fit for publication, without promising protection, security or even compensation for any losses. Photojournalists have lost their cameras, lenses and mobile phones and were not compensated. They cannot afford to buy new ones with their low salaries. The equipment is not available because it is imported and expensive. Insurance companies refuse to cover photojournalists’ equipment without satisfactory explanations.

Since I became a photo editor I have had no time to work as a photojournalist who documents and expresses her opinions and dreams, as I was doing over the past 25 years. I may have gained several kilograms in weight as a result of sitting at a computer most of the day to pick and edit photos by others. I now have a family of photojournalists whose achievements I take pride in. I am happy with the progress made by my sons and daughters, but I fear their exposure to the job's hazards.

Photojournalists in particular are subjected to danger. They cannot do their jobs unless they are on the front line, or near the line of fire. Otherwise, there will be no photo.

On the night of the Maspero clashes, before the conflict between the people intensified, one of my photojournalists was doing his work and watching the scene through his lens. At a certain moment, he saw a tank run over five people but he could not take a photo. I could not make out what he was saying when he called. I could only hear him sobbing. He kept repeating two words over and over, “They are running over the people!" I ordered him to return to the office, and then asked him to come stay over at our place. My husband and I failed to calm him down. I still do not know how psychological trauma can be treated.

Officials at newspapers disregard all that. They ask for photos. They cannot do without photos because they add color to empty spaces in their layout. Photos are therefore needed for the wrong reasons, they are not needed because they document incidents and are as strong as written news stories. They are not given enough space to highlight the effort exerted by the photojournalists to provide their visual account in a solid way. I repeat to my fellow editors, the picture is not supposed to repeat what the text says. The photo has an independent and different effect. Together, they provide a third dimension to the story. We suffer from visual illiteracy.

After an eventful day, we all sit together in our little office — which we like to call liberated territory — hours after the morning working hours end. Nobody wants to go home. And nobody has an idea what to do to become a good citizen in such conditions. We share a bite over a lighthearted chat that hides our tensions. We find protection in each other. And we dream of a just homeland.

Randa Shaath is a photographer and photo editor for the independent Al-Shorouk newspaper.

This article was translated by Dina Zafer. 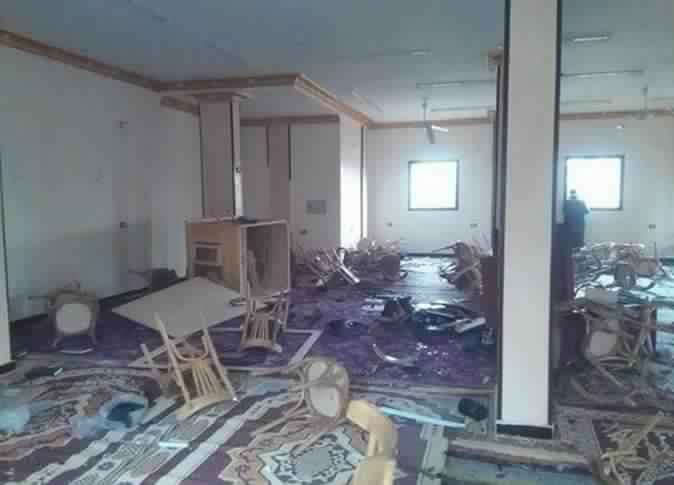 Atfeeh building not licensed church and demolition order was issued for it: Sources