Russian forces have had “partial success” in eastern Ukraine after making limited gains near the villages of Solodke and Novomykhailivka in the Donetsk region, the Ukrainian military said Tuesday.

“The hostilities continue,” the military’s general staff said in a situation update.

Ukrainian troops have been able to hold its ground in other parts of the Donetsk region, the general staff said.

Russian forces launched assaults in the directions of Volodymyrivka-Bakhmutske and Striapivka-Soledar, where Ukrainian soldiers pushed the invaders back, according to the general staff.

“Fighting continues on the Pokrovsk–Bakhmutske and Horlivka–Zalizne directions,” the general staff said.

Near the city of Avdiivka, the Russians shelled the areas of Krasnohorivka, Spartak and Nevelske with barrel artillery, the general staff said.

Fighting is also ongoing near Staromykhailivka–Nevelske and the settlement of Ivano Dariivka, it added.

Southern front: Ukraine said it had been able to repel a Russian assault in the south. “An attempt to improve the tactical position by assault actions in the direction of Zeleny Hai–Novohryhorivka ended with significant losses and a retreat for the enemy,” the general staff said.

Belarus alert: Meanwhile, Kyiv’s troops stationed near the border with Belarus are on high alert because there is “still a threat” that Russia could launch air and missile strikes with support from Minsk, the Ukrainian military said. Belarus is an ally of Russia and has been used as a launch point for Russian troops into Ukraine. 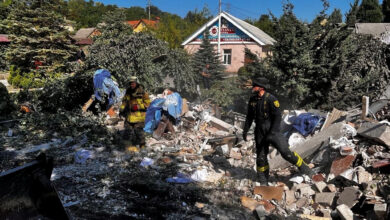