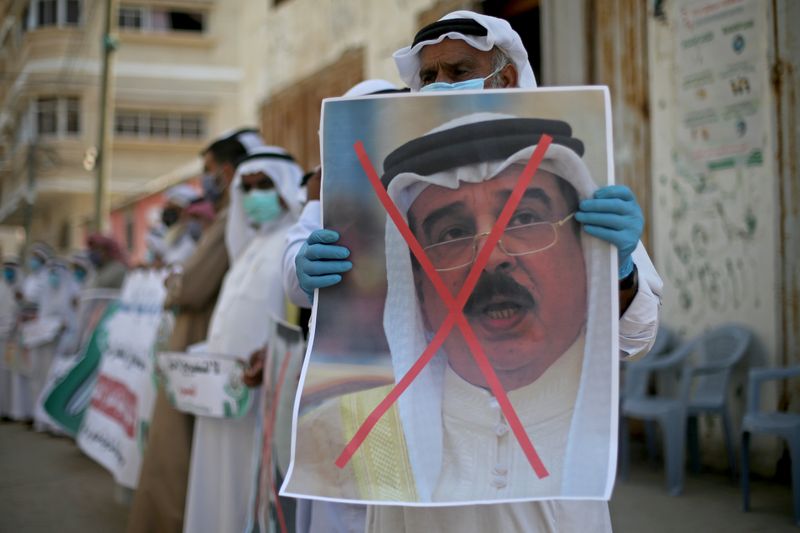 GAZA (Reuters) – Palestinians in Gaza burnt pictures of Israeli, US, Bahraini and United Arab Emirates leaders on Saturday in protest over the two Gulf countries’ moves to normalize ties with Israel.

Bahrain on Friday joined the UAE in agreeing to normalize relations with Israel, a move forged partly through shared fears of Iran but one that could leave the Palestinians further isolated.

The Gaza protest, attended by a few dozen, was organized by the ruling Islamist group Hamas.

“We have to fight the virus of normalization and block all its paths before it succeeds, to prevent it from spreading,” said Hamas official Maher al-Holy.

While the United States, Israel, the UAE and Bahrain hail the diplomatic moves as a major step toward Middle East peace and stability, the Palestinians see it as a betrayal.

They fear a weakening of a longstanding pan-Arab position that calls for Israeli withdrawal from occupied territory and acceptance of Palestinian statehood in return for normal relations with Arab countries.

Despite a deep political rift going back to 2007, Palestinian President Mahmoud Abbas, whose Palestinian Authority has limited rule in the Israeli-occupied West Bank, and his Hamas rivals have been united against the Gulf states’ move.

In the West Bank, the Secretary General of the Palestine Liberation Organization, Saeb Erekat, said the diplomatic push will not achieve peace if the decades-long Israeli-Palestinian conflict is not resolved first.

“The Bahraini, Israeli, American agreement to normalize relations is now part of a bigger package in the region, it isn’t about peace, it is not about relations between countries. We are witnessing an alliance, a military alliance being created in the region,” Erekat told Reuters.

In Israel, Kushner says ‘stage is set’ for Mideast progress