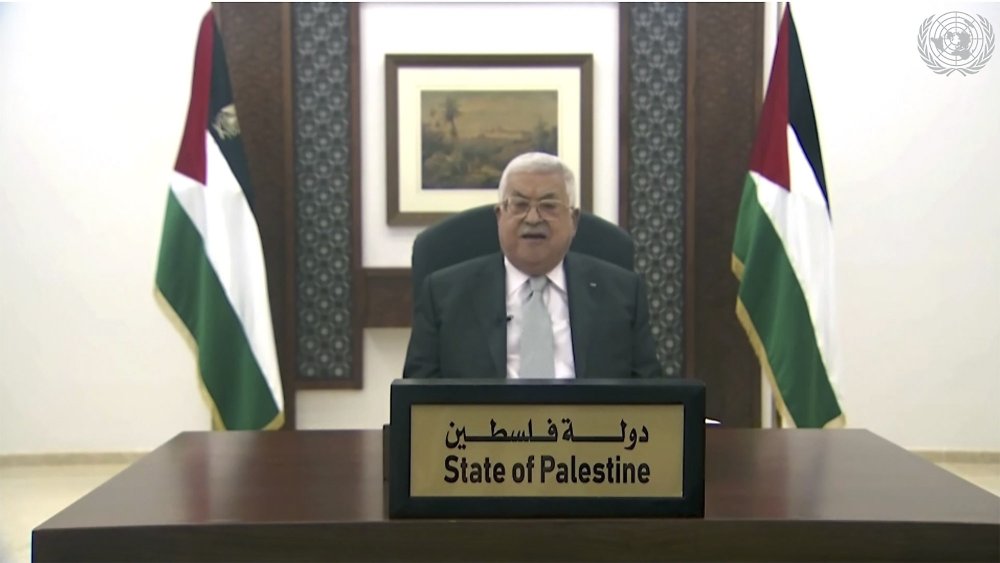 JERUSALEM (AP) — Palestinian President Mahmoud Abbas on Friday called for an international conference early next year to launch a “genuine peace process” while criticizing the recent decision of two Arab countries to normalize relations with Israel.

Abbas seemed to acknowledge the growing international weariness with the decades-old conflict as he delivered the latest in a long series of addresses to the UN General Assembly.

“I wondered while preparing this statement what more could I tell you, after all that I have said in previous statements,” he said in the video address from his headquarters in the West Bank city of Ramallah.

The Palestinians have rejected President Donald Trump’s proposal to end the conflict, which overwhelmingly favors Israel, and have officially cut off contacts with both the US and Israel. Arguing that Washington is no longer an honest broker, they have called for a multilateral peace process based on UN resolutions and past agreements.

They have also rejected the decision of the United Arab Emirates and Bahrain to normalize ties with Israel, viewing it as a betrayal of the longstanding Arab consensus that recognition of Israel should only come in exchange for territorial concessions.

Israel’s UN Ambassador, Gilad Erdan, responded with a video statement calling Abbas’ speech a collection of “lies and incitement against Israel” and arguing that the Palestinian leader was “desperate” because of the agreements Israel reached with Bahrain and the UAE.

In his speech, Abbas said the agreements, signed at the White House earlier this month, are a “violation” of the “principles of a just and lasting solution under international law.”

For more than three decades, the Palestinians have sought an independent state in the West Bank, Gaza and east Jerusalem, territories seized by Israel in the 1967 war. Israel withdrew from Gaza in 2005 but imposed a crippling blockade when the Palestinian militant group Hamas seized power from Abbas’ forces in 2007.

There have been no substantive peace talks between Israel and the Palestinians since Israeli Prime Minister Benjamin Netanyahu was first elected more than a decade ago, and the two sides are fiercely divided over the core issues of the conflict.

Instead, Netanyahu has focused on building ties with Arab, African and Asian countries that have long supported the Palestinian cause. In Israel, the agreement with the United Arab Emirates, an oil-rich country with considerable regional influence, is seen as a historic breakthrough that could transform the Middle East.

Israel put on hold its plans to annex up to a third of the occupied West Bank following the deal with the UAE, while saying it still plans to eventually go through with them. The UAE said the agreement removed an immediate threat to the two-state solution and gave the region a window of opportunity.

The Palestinians insist that the core Middle East conflict will not be resolved until they realize their aspirations for independence.

“We will not kneel or surrender, and we will not deviate from our fundamental positions, and we shall overcome,” Abbas said, speaking behind a plaque that read “State of Palestine.”

“There will be no peace, no security, no stability and no coexistence in our region while this occupation continues.”

Image: In this image made from UNTV video, Palestinian President Mahmoud Abbas speaks in a pre-recorded message which was played during the 75th session of the United Nations General Assembly, Friday, Sept. 25, 2020, at UN headquarters, in New York. (UNTV via AP)

Palestinians arrest supporters of Abbas rival based in UAE