(Reuters) – An unprecedented spate of fierce, wind-driven wildfires in Oregon have all but destroyed five small towns, leaving a potentially high death toll in their wake, the governor said on Wednesday, as initial casualty reports began to surface.

Hundreds of miles away in northern California, three fatalities were confirmed on Wednesday from a lightning-sparked conflagration that raged with renewed intensity this week after firefighters had made significant headway containing it.

While more than two dozen major blazes continued to wreak havoc across wide swaths of California, the neighboring state of Oregon bore the latest brunt of wildfires plaguing much of the western United States over the past week.

Winds of up to 50 miles per hour (80 kilometers per hour) sent flames racing tens of miles within hours, engulfing hundreds of homes as firefighters fought at least 35 large blazes in Oregon with a collective footprint nearly twice the size of New York City.

Several Oregon communities, including the town of Detroit in the Santiam Valley, as well as Blue River and Vida in coastal Lane County, and Phoenix and Talent in southern Oregon, were substantially destroyed, Governor Kate Brown told a news conference.

“This could be the greatest loss in human lives and property due to wildfire in our state’s history,” Brown said, without providing details.

She described rescue teams saving evacuees by pulling them from rivers where they took refuge from flames. 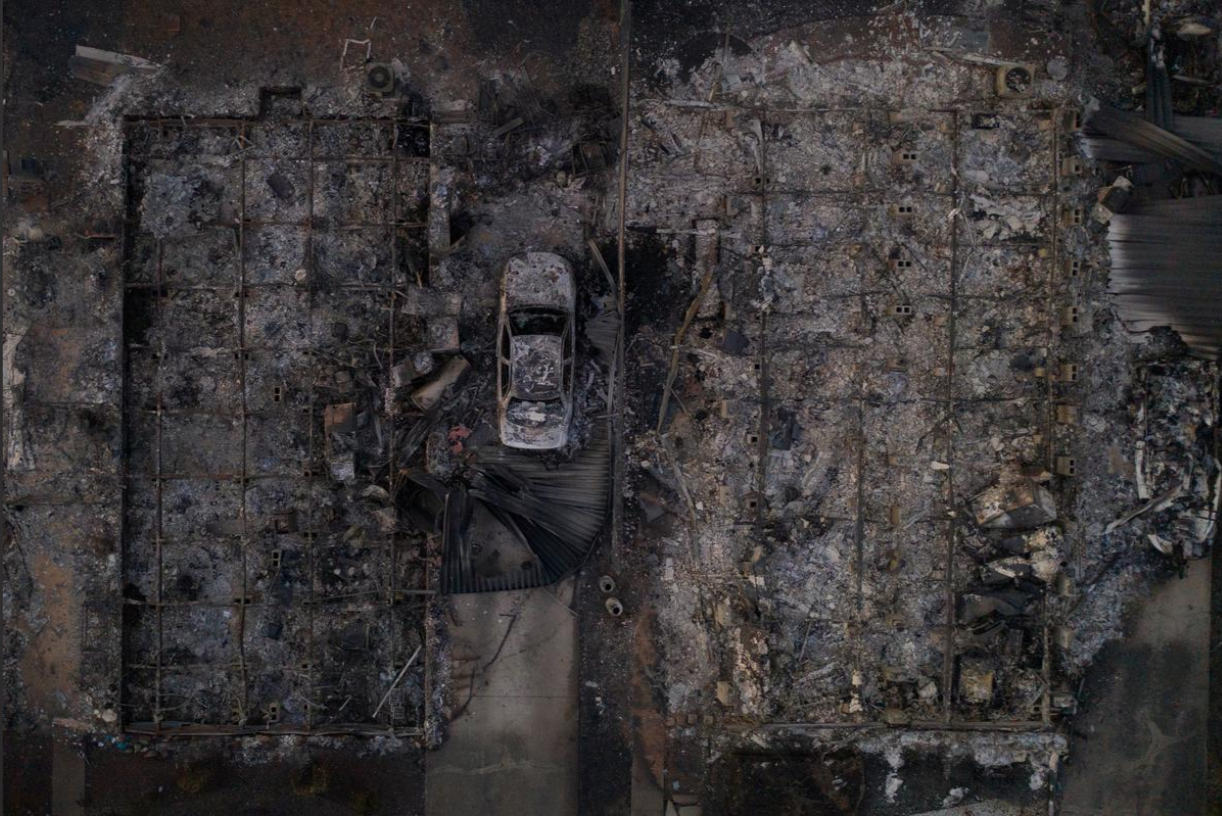 A 12-year-old boy and his grandmother died in a wildfire burning near the Santiam Valley community of Lyons, about 50 miles south of Portland, KOIN News reported.

The fire also was suspected of causing at least one death outside of Ashland, said Rich Tyler, spokesman for the Oregon State Fire Marshal.

Farther north, multiple blazes also roared on in Washington state, where a one-year-old boy was killed and his parents severely burned fleeing a fire in Okanogan County, police said.

In California, officials said some 64,000 people were under evacuation orders on Wednesday while crews battled 28 major fires across portions of the most populous US state.

About a third of those evacuees were displaced in Butte County alone, north of Sacramento, where a wildfire has scorched more than 200,000 acres since it was ignited on Aug. 17. Almost half of that landscape was consumed since Tuesday, as a newly ferocious flank of that blaze dubbed the Bear Fire spread largely unchecked over some 97,000 acres.

Residents of more than a dozen towns were told to flee immediately or be prepared to go at a moment’s notice.

The remains of three victims were found in two separate locations of that fire zone, according to Butte County Sheriff Kory Honea, bringing the total death toll from this summer’s devastating spate of California wildfires to at least 11.

The Bear Fire raged near the outskirts of Paradise, a town largely reduced to ash in 2018, with 85 lives lost, in a firestorm that still ranks as the deadliest in California history.

Separately, a fire crew in Butte County faced a close call on Wednesday when advancing flames sent them scrambling for cover inside a nearby structure as their transport vehicle was incinerated, a state fire official told reporters. 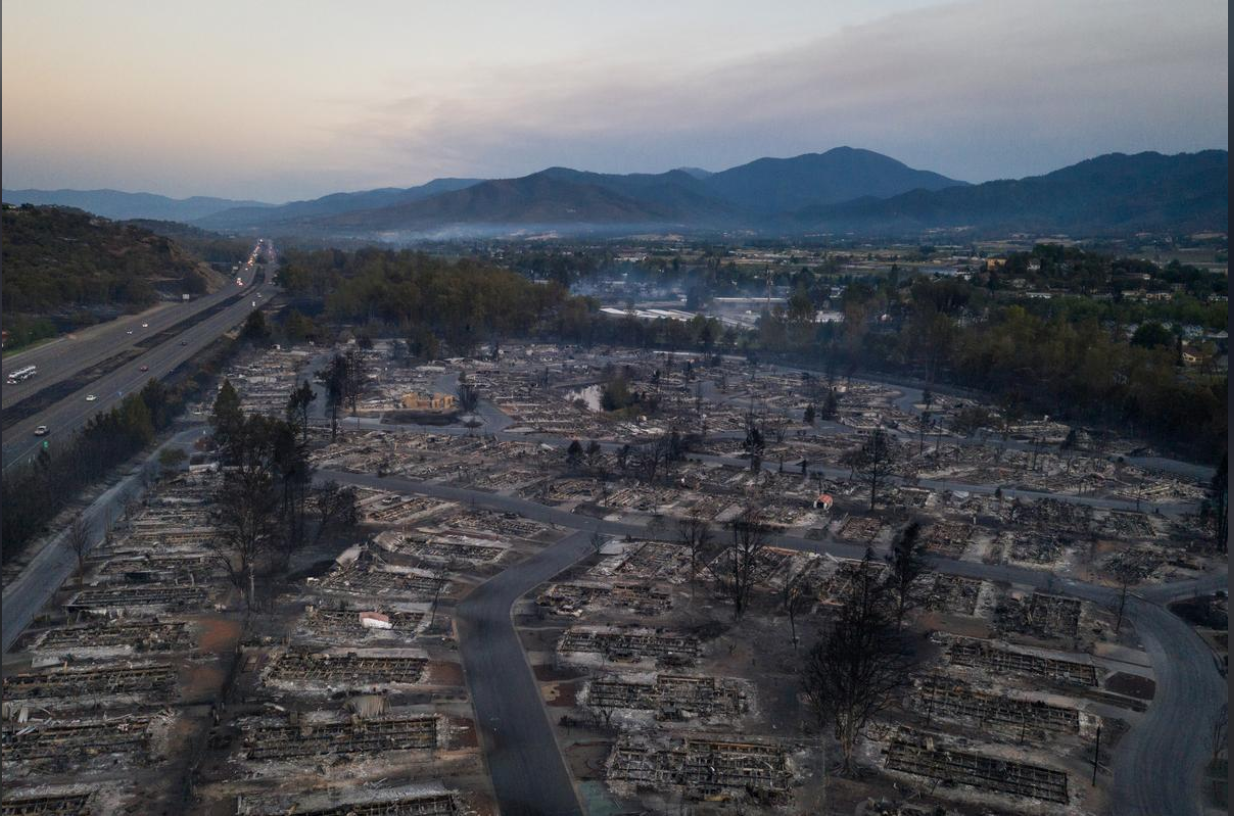 Houses and vehicles in the Bear Lakes Estates neighborhood which were left devastated by the Alameda fire in Phoenix, OR, US, September 9, 2020. Picture taken with a drone. REUTERS/Adrees Latif

Firefighters likewise were forced to retreat from uncontrollable blazes in Oregon while officials gave residents “go now” orders to evacuate in just minutes.

“It was like driving through hell,” Jody Evans told local television station NewsChannel21 after a midnight evacuation from Detroit, about 50 miles (80 km) west of Salem, Oregon’s capital.

To the south, parts of Medford, a city of over 80,000 residents – many of them retirees – were under evacuation orders or warnings as a growing wildfire closed a section of Interstate 5, the primary north-south highway along the West Coast.

“Absolutely no area in the state is free from fire,” said Doug Graf, fire protection chief for the Oregon Forestry Department.

Climate scientists say global warming has contributed to greater extremes in wet and dry seasons across the US West, causing vegetation to flourish then dry out, leaving more abundant, volatile fuel for fires.

In California, all 18 National Forests were closed due to “unprecedented and historic fire conditions,” the US Forest Service said on Wednesday

The so-called Creek Fire about 35 miles (56 km) north of Fresno, tore through the Sierra National Forest, left especially susceptible to flames due to drought and bark beetle damage, destroying over 360 homes and other structures.

“This fire is just burning at an explosive rate,” said Daniel Berlant, a spokesman for California’s state fire authority. “You add the winds, the dry conditions, the hot temperatures, it’s the perfect recipe.”