It was an unconventional venue for an unusual encounter: in the Vatican’s Sistine Chapel in the summer of 2016, OPEC’s new secretary general Mohammed Barkindo bumped into Citigroup’s global head of commodities research Ed Morse.

Their chat, at an energy industry event held in the Chapel, led to a series of meetings that have reshaped the way the Organization of the Petroleum Exporting Countries interacts with the hedge funds and trading houses that influence world oil markets.

Barkindo, elected to OPEC’s top job in June 2016 to deal with an oil price slump, told Morse that OPEC wanted to better understand the way financial players worked in the oil markets.

It was a departure for OPEC from its long-held suspicion of such players. In the past it has routinely accused them of speculation that distorted oil prices, pushing them higher or lower than supply-demand fundamentals warrant.

OPEC and non-OPEC oil ministers meet in Vienna on Thursday to decide whether to extend beyond June 30 their deal to reduce output, and perhaps deepen it, in an effort to support prices. 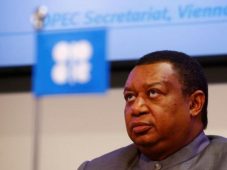 “It was at the Vatican that we first discussed the idea of OPEC reaching out to the financial players in the oil markets,” Barkindo told Reuters. “The world of oil has changed, including the fundamentals and its dynamics. And so must OPEC.”

He said Morse helped organize a meeting for OPEC officials with hedge funds at the end of 2016. “We went further to break the Berlin Wall with tight oil producers and met them in Houston in March,” said Barkindo. Morse did not respond for a request for comment.

In separate meetings organized via different routes and facilitators, Saudi Arabia’s energy minister Khalid al Falih and his team held discussions with hedge funds. They also met top trading houses Vitol and Litasco in Vienna in November, ahead of the last OPEC meeting, according to market sources.

“As the market got increasingly financialized, the Saudis and others at OPEC understood and accepted it is not just driven by fundamentals and decided it was worth engaging with those who move the market short-term,” said Amrita Sen of consultancy Energy Aspects, which also often helps facilitate the dialogue between OPEC members and financial markets.

The engagement with financial markets seems to be changing the tone of OPEC’s public style. It now sometimes mimics the language of central bankers.

Over the past two months, Falih has twice used the phrase coined by European Central Bank President Mario Draghi five years ago in his successful bid to defend the euro. OPEC will do “whatever it takes”, to reduce an oil glut, was the message from Falih in April, repeated in a joint statement with Russia’s energy minister Alexander Novak.

Hedge funds bought heavily into the oil market late last year as it became apparent OPEC would cut production. They have heavily sold those positions in recent weeks, stalling a recovery in oil prices near $50 a barrel, as they realized bloated world oil inventories would take longer than expected to shrink to normal levels.

“Even after a recent price correction, there is 700 million barrels of (investors’) net length in the market,” said Gary Ross, head of global oil at PIRA Energy, a unit of S&P Global Platts.

“It is exceptionally important for producers to understand the behavior of financial market players and what they think about future price trends.”

Non-OPEC Russia, having joined forces with OPEC to cut output, has also moved closer to the financial players.

Russian oil minister Novak surprised market watchers this year when his team held conference calls with investors about their oil market outlook, organised by banks such as Morgan Stanley or Sberbank – something his predecessors never did.

“One of the government’s obligations is to explain to investors the logic of its decisions,” said Novak’s head analyst Pavel Sorokin, who previously worked for Morgan Stanley.

“As far as joint policies with OPEC are concerned, the market is always full of rumors. Hence we need to be in contact with the market and investors. We explain our market vision and are learning about reactions to certain events and decisions. But we don’t discuss anything confidential,” he added.

People who attended the discussions between Saudi officials and market players, including hedge funds and traders, said they detected no hint of Saudi intentions. One was at such a meeting in November, ahead of the last OPEC gathering.

“They were listening a lot and said little. If you made a bet based on that meeting, you probably lost money,” said the participant, who asked not to be named because the meeting was confidential.

Prices fell steeply on the comments, as investors assumed Saudis would not be willing to extend production cuts. A month later Falih promised “whatever-it-takes” steps, including extending cuts well into 2018.

Why OPEC may not have the answer to high oil prices

The Russian-Ukrainian crisis has posed challenges to us: Egypt’s Petroleum Ministry