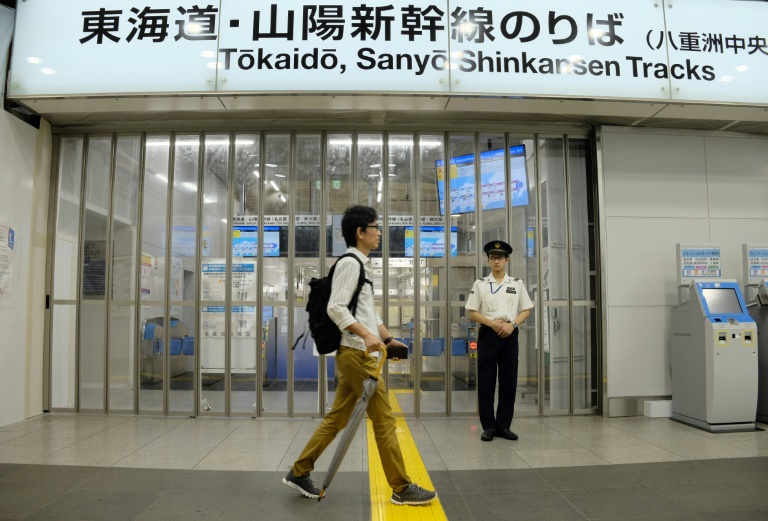 Rated “large and very strong”, the storm has forced the cancellation of two Rugby World Cup matches, disrupted the Japanese Grand Prix and grounded all departing flights in the Tokyo region.

It is forecast to crash into land in central or eastern Japan early Saturday evening, packing maximum gusts of 216 kilometers per hour (134 miles per hour), Japan’s Meteorological Agency (JMA) said.

But hours before the worst of the storm arrived, its outer bands claimed the first casualty in Chiba, east of Tokyo, which was also badly hit by a powerful typhoon last month.

“A 49-year-old man was found in a toppled mini truck. He was sent to hospital but confirmed dead,” Hiroki Yashiro, a spokesman at Ichihara Fire Department, in Chiba, told AFP.

Hours of torrential rain prompted the JMA to issue their top-level emergency warning for heavy rain for parts of Tokyo and surrounding areas, issued only when disasters are expected.

Hagibis is forecast to be the first storm rated “very strong” to hit the main island of Honshu since 1991, when the category system was introduced, a JMA official said.

By mid-afternoon, 3.25 million people were under non-mandatory evacuation orders, and more than 13,500 people had moved to shelters, including some whose homes were damaged by a powerful typhoon that hit the region last month.

“I evacuated because my roof was ripped off by the other typhoon and rain came in. I’m so worried about my house,” a 93-year-old man told national broadcaster NHK as he sheltered at a center in Tateyama in Chiba east of Tokyo.

Hagibis is an unusually large storm, expected to bring “brutal winds and violent seas” to large swathes of the country, the weather agency said.

With the center of the storm still hundreds of kilometers away in the Pacific, torrential rain was falling and tornado-like gusts of wind ripped into several homes in Chiba, destroying one.

Five people including a three-year-old boy were sent to hospital, but none suffered serious injuries, the local fire department told AFP.

In Gotemba, west of Tokyo, the fire department said it had rescued one man who fell into a swollen canal but was still searching for a second.

The JMA has forecast half a meter of rain for the Tokyo area in the 24 hours to midday on Sunday, with more for the central Tokai region, but many rivers were close to breaching their banks by Saturday afternoon.

Local authorities warned they would release water from the Shiroyama dam, southwest of Tokyo, possibly starting at 5pm, warning people living near downstream to be on alert.

Thousands of homes in Tokyo and the surrounding areas lost power, though in some cases only briefly, with crews working to reconnect people as quickly as possible.

Automakers, including Toyota and Honda, have shut down their factories, and many supermarkets and convenience stores in the capital closed, a day after residents shopping for typhoon supplies emptied the shelves.

The storm has forced the delay of Japanese Grand Prix qualifiers scheduled for Saturday and the cancellation of two Rugby World Cup matches: England-France and New Zealand-Italy.

It could also jeopardize a key match-up between Scotland and Japan on Sunday. Officials are not expected to make a final decision on that game until Sunday morning, after they have assessed any damage to the venue and transport links.

Scotland face elimination if the match is axed and have warned they could take legal action if the game is cancelled. World Rugby called the threat “disappointing”.

The storm is also causing transport chaos over a long weekend in Japan.

By early afternoon, all departing flights from Tokyo’s Haneda and Narita airports were grounded, with bullet trains and local trains halting some or all services.

Even Tokyo’s Disneyland and DisneySea theme parks shut up shop in their first ever all-day typhoon closure.

Japan is hit by around 20 typhoons a year, though the capital is not usually badly affected.

Hagibis is bearing down on the region just weeks after Typhoon Faxai hit the area with similar strength, killing two and causing major damage in Chiba.

Image: AFP / Kazuhiro NOGI Typhoon Hagibis has forced the cancellation of flights, bullet trains and local lines in Tokyo and beyond