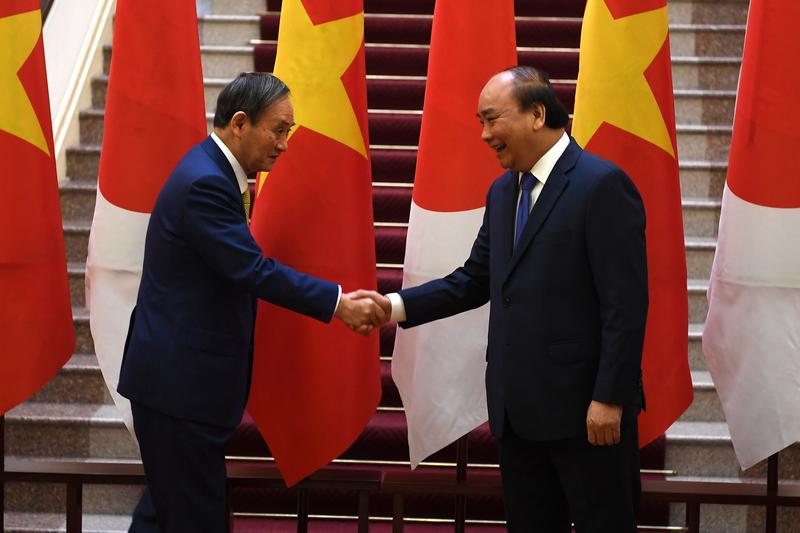 HANOI (Reuters) – Japan hailed an agreement in principle to supply Vietnam with military gear and technology, as the two governments pledged on Monday to strengthen security and economic ties amid mounting concerns about China’s assertiveness in the region.

“It is a big step in the field of security for both countries,” Japanese Prime Minister Yoshihide Suga told reporters after meeting his Vietnamese counterpart, Nguyen Xuan Phuc, in Hanoi.

The two leaders also agreed on the importance of maintaining peace, security, freedom of navigation and overflight in the South China Sea, and the peaceful settlement of disputes, Phuc said in a joint media appearance.

Suga, who took office last month after Shinzo Abe quit because of poor health, is making his overseas diplomatic debut this week, visiting Vietnam, the current chair of the Association of Southeast Asian Nations (ASEAN), and Indonesia, the group’s largest nation.

In a speech later Monday, Suga said Japan opposed any steps to heighten tensions in the South China Sea, where Vietnam and other ASEAN members have territorial disputes with China.

“Regarding the South China Sea issue, it is important for all countries concerned not to rely on force or threat but to work toward peaceful resolution based on international law,” Suga said, avoiding harsh anti-China rhetoric.

Back in Tokyo, Japanese Defense Minister Nobuo Kishi told reporters that Japan’s Maritime Self-Defence Force will conduct a joint drill with US and Australian navies around the South China Sea on Monday, Kyodo news agency reported.

Kishi also agreed with visiting Australian Defense Minister Linda Reynolds to start talks to make it possible for Japan’s Self Defense Forces to protect Australian military assets such as warships and aircraft, Kyodo said. Japan already has similar arrangements with the United States.

Japan must balance its deep economic ties to China with security concerns, including Beijing’s claims over disputed isles in the East China Sea.

ASEAN members remain wary of losing access to China’s economy, and are reluctant to become entrapped in an intense confrontation between Washington and Beijing.

Japan, which ended a decades-old ban on overseas arms sales in 2014 to help strengthen the nation’s military and lower the cost of home-built military equipment, has been in talks with Vietnam, Indonesia and Thailand on deals to allow such exports.

“We have to make sure the equipment and technologies transferred to Vietnam (are) to be used in a peaceful manner and contribute to regional peace,” Japanese foreign ministry spokesman Tomoyuki Yoshida told a separate news briefing.

Suga’s visit also coincides with Japan’s efforts to diversify its supply chains and reduce reliance on China by bringing production home or moving it to Southeast Asia.

Vietnam is a popular choice for Japanese companies. Half of the 30 Japanese firms that used a 23.5 billion yen government programme to diversify supply chains in Southeast Asia targeted Vietnam, which has aggressively courted such investment.

Suga and Phuc witnessed the signing of a memorandum of understanding for Japan’s Marubeni Corp to invest $1.3 billion in a power plant in Vietnam’s Can Tho province and another for Tokyo Gas Co Ltd and PetroVietnam Power Corp to jointly develop a $1.9 billion gas-fired plant in Vietnam.

Suga said the two countries would bolster cooperation to mitigate the impact of the pandemic, and announced a resumption of air travel links.

“We agreed on restarting ‘business track’ travel as well as passenger flights between the two countries today,” Suga told the joint media event.