Reports that a Syrian YouTuber had hosted a gender reveal party for his unborn child at the Great Pyramids of Giza are false, an official said.

A video by YouTuber “Siamand” sparked widespread controversy after he claimed that he held a ceremony with his wife at the Pyramids to announce the gender of their unborn child by lighting the area up, according to SkyNews.

The video shows the couple stating that the event was planned over many days, and their goal was to be the first people ever to host a gender reveal party at the Great Pyramids.

This was all a lie, said the official.


“No private parties take place in the area of the pyramids. I do not know this man, and it is likely that he entered during sound and light experiments,” the head of the Sound and Light Company Mohamed Abdel Aziz commented on the incident.

“A few days ago, the pyramids were lit in blue and orange in coordination between the Ministry of Tourism and Antiquities and the Ministry of Health on the occasion of World Liver Day and the celebration of the elimination of Hepatitis C in Egypt,” Abdel Aziz confirmed.

“Legal measures will be taken to deter the person who made this claim via video, in coordination with the Ministry of Tourism and Antiquities,” he warned.


“We often receive calls from embassies of different countries asking to light the pyramids with their country’s flag, but we reject that matter, as lighting the pyramids for such matters is completely forbidden.”


At the same time, an advisor to the former Minister of Tourism Walid al-Batouty, said: “The fictitious act committed by the Syrian YouTuber, promoting a misleading video of a gender party for his newborn lighting the Giza pyramids, is nothing but a clear lie aimed at false fame.”

Batouty added, “This person is looking for fame in a striking way, and he will not find on the face of the earth a place more famous than the pyramids to achieve his goal.”

“There are many examples similar to these practices, which aim to stir controversy through social media, and this young man took advantage of the Sound and Light Company’s organization of one of the events that illuminate the pyramids at night, and through which he promoted his claim of organizing a fake party for his newborn,” Batouty added.

Batouty appealed to authorities to create an international legal department to prosecute those who commit similar acts and people who go to well-known tourist attractions, whether in Egypt or abroad, and promote lies and allegations in famous tourist attractions. 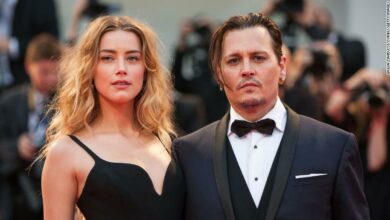 Dissection by TikTok: Johnny Depp, Amber Heard trial posts are making accidental influencers out of some, targets out of others