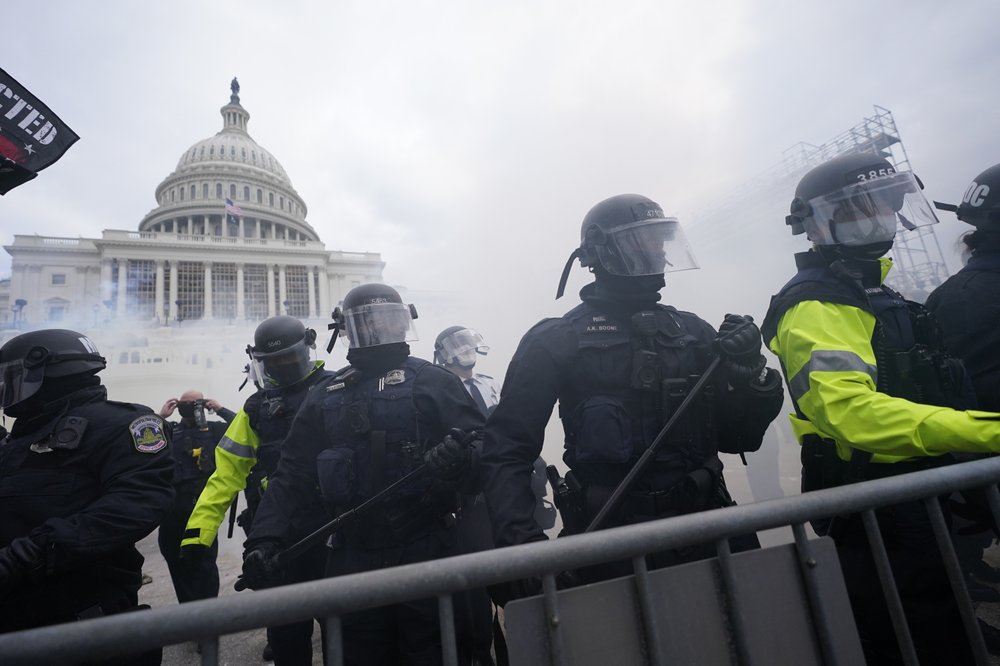 Two firefighters loaned to Washington for the day were the only medics on the Capitol steps January 6, trying to triage injured officers as they watched the angry mob swell and attack police working to protect Congress.

Law enforcement agents were “being pulled into the crowd and trampled, assaulted with scaffolding materials, and/or bear maced by protesters,” wrote Arlington County firefighter Taylor Blunt in an after-action memo. Some couldn’t walk, and had to be dragged to safety.

Even the attackers sought medical help, and Blunt and his colleague Nathan Waterfall treated those who were passing out or had been hit. But some “feigned illness to remain behind police lines,” Blunt wrote.

The memo is one of hundreds of emails, texts, photos and documents obtained by The Associated Press. Taken together, the materials shed new light on the sprawling patchwork of law enforcement agencies that tried to stop the siege and the lack of coordination and inadequate planning that stymied their efforts.

The AP obtained the materials through 35 Freedom of Information Act requests to law enforcement agencies that responded to the Capitol insurrection.

“We were among the first mutual aid teams to arrive and were critical to begin the process of driving protestors off the Capitol,” wrote Blunt.

Five people died in the attack, including a police officer. Two other officers killed themselves after. There were hundreds of injuries and more than 300 people, including members of extremist groups Proud Boys and Oathkeepers, have been charged with federal crimes. Federal agents are still investigating and hundreds more suspects are at large. Justice Department officials have said they may charge some with sedition.

The Arlington firefighters ended up at the Capitol because, two days earlier, Washington Metro Police Chief Robert J. Contee had formally asked the Arlington County Police Department, along with police departments from Montgomery and Prince George’s counties in Maryland, and Arlington County in Virginia, to lend them some officers trained for protests and riots, according to the documents.

At the time, the Capitol Police department had issued a security assessment warning that militia members, white supremacists and other extremists were heading to Washington to target Congress in what they saw as a “last stand” to support President Donald Trump.

Federal agencies not responding were also preparing for potential violence. On January 4, US Customs and Border Protection said staff should try to telework for the week.

Two days later, it was 3:39 pm when Penn emailed county officials that he had “just been notified” that Arlington officers were responding to the Capitol attack and had been absorbed into the overall response led by Capitol Police.

That was almost 90 minutes after the mob first busted into the Capitol and more than an hour after the medics began treating injured police on the steps.

Members of Congress, who were locked down or rushed to safety that day as the attackers approached the House and Senate chambers, are holding hearings this week to get to the bottom of what went wrong with the law enforcement response that allowed the crowd to enter and ransack the Capitol building.

One question they are looking to answer is why the Capitol Police didn’t have more help on hand early in the day, before the rally near the White House devolved into insurrection at the Capitol.

The emails obtained by AP — hastily written and including misspellings and incomplete sentences — show that nearby police agencies were alerted two days earlier that there might be trouble and were prepared to help.

The night before the breach, after hours of rallies and speeches across the city, Federal Protective Service officers, who protect federal property, had noticed protesters trying to camp out on federal property and were “being vigilant for any suspicious activity,” according to an email from the agency.

They were expecting large crowds, and by the next morning they were monitoring them closely.

At 9:45 a.m. a protective service liaison to the Capitol Police wrote, “Good morning Sir, what I have is the Ellipse is permitted for 30k but they expecting for there to be much more. Freedom Plaza original permit was 5k and it was raised to 30k, the permit outside Sylven Theater is permitted for 15K.”

The agents were particularly interested in the right wing extremist group, Proud Boys. They noted how many were in Washington, that they were staying at a downtown hotel, and what they planned.

In a briefing at noon on that day, just as Trump was encouraging supporters to “ fight like hell,” a Federal Protective Service email said about 300 Proud Boys were at the US Capitol.

“No incidents at this time,” the email said. But then it warned, “The Proud Boys are threatening to shut down the water system in the downtown area, which includes government facilities.”

The email noted there was a man in a tree with what appeared to be a rifle near the Ellipse, and about 25,000 people were around the White House, including some who were hiding bags in bushes outside the building.

“Together we stand!” the officer signed off.

About 20 minutes later, a protective service officer whose name was redacted sent an email that read, “POTUS is encouraging the protesters to march to capitol grounds and continue protesting there.” POTUS stands for president of the United States.

In a series of emails that followed, protective service officers messages offered a blow-by-blow account of the march to the Capitol from the rally where Trump spoke.

“Protesters moving towards the capitol down Pennsylvania, Constitution and Madison in numbers estimated 10-15,000,” read an email sent at 12:28 pm.

The officers tracked them across the city and at 12:57 pm a message read, “Large group just breached the USCP barricade on the West Front,” referring to the Capitol Police barriers on west side of the Capitol Building.

About a half hour later, they reported several police officers were injured, and then at 2:14 a message screamed “CAPITOL HAS BEEN BREACHED. PROTESTERS ARE NOW INSIDE THE CAPITOL.” Two minutes later they reported the House and Senate chambers were being locked down.

“Shots fired 2nd floor house side inside the capitol,” read a message at 2:45, probably the moment when a Capitol Police officer fatally shot Ashli Babbitt, a Trump supporter who tried to hurl herself through a broken interior window into the Speaker’s Lobby just outside the House chamber where lawmakers were taking cover.

Intelligence agents used Facebook to monitor dozens of protests planned for January 6 and beyond, according to emails. These rallies had names such as the “Yugest Trump Parade of All (45 Exclamation Points)!,” “Fight for President Trump and Your Rights,” and “Wild Protest for Donald Trump (The Republican Mandate).” Some events were permitted, others were not.

Officers in the Virginia suburb of Vienna were already on edge two days before the Capitol breach after a video of a small, half-hour protest at the home of Republican Sen. Josh Hawley __ a Trump supporter __ attracted more than 100,000 pageviews.

“They claim they are coming back tonight,” Vienna Deputy Chief Daniel Janickey said in January 5 emails to Fairfax County officials.

“WE will have some officers out there tonight monitoring in case (the) group shows up,” Janickey wrote. “Hawley and his staff have hired armed private security for (the) next 48 hours.”

Those protesters didn’t return. But within 24 hours, Fairfax County, Virginia, officials realized their Washington counterparts had much more trouble on their hands.

That was about two hours after the first windows had been broken.

The US Capitol had been breached, he said.

“It is obvious to me based on my experience and knowledge that an emergency exists,” said Rohrer. He said he had authorized the Fairfax County Police Department to send Civil Disturbance Unit officers and commanders “to assist gaining control for safety reasons.”

He added that they were monitoring the deployment closely. The redacted email refers to an early June episode when police from several jurisdictions used tear gas to violently break up a peaceful and legal protest in Lafayette Square, across the street from the White House.

On January 6, Rohrer said he reminded commanders on the scene “that they are to cease operations if at any point they determine they are being used in an inappropriate, unethical, illegal manner, or are not under a competent authority… Maintaining life safety, regaining and establishing a safe perimeter, etc., should be the initial focus.”

Just 12 minutes later, Rohrer had an update: They were suspending any fire, rescue or emergency service transportation to hospitals in the District of Columbia and “upgrading response and command structure.”

For hours, Fairfax County’s police monitored Metro stations and acted as back up to Washington police, according to the emails. They were also checking with hotels where some in the mob were staying. Rohrer noted that many had been staying in Alexandria and Arlington..

The hotels “reported some problems with crowds and disorderly conduct the past few nights,” he said.

That evening, at 8:31 pm, a Federal Protective Service memo alerted “there is a report of an armed militia group headed to dc from west Virginia. Query ongoing.”

As midnight approached, Rohrer emailed again. Although the Capitol was quiet, “Intel will be monitored throughout the night and, unfortunately, PD and US Capitol Police are investigating several threats targeting residences of Capitol VIPs or family members received late tonight.”

“Gainer throws a lot of shame but he doesn’t offer any answers to what ‘specifically’ he would have done differently to keep the initial group from breaking down the barriers,” emailed Bennett.

“Our Police Department’s Civil Disturbance Unit answered the call yesterday, and as much as I hated to activate you, it was an activation to preserve our republic,” he wrote. “I am hopeful we will never again see what we witnessed yesterday, but I am most hopeful that yesterday’s events will galvanize our county and our nation as we do our best to vaccinate, maintain calm and create a sense of unity.”

By MARTHA MENDOZA and JULIET LINDERMAN

FILE – In this January 6, 2021, file photo, police stand guard after holding off rioters who tried to break through a police barrier at the Capitol in Washington. (AP Photo/Julio Cortez, File)

US militias want to 'blow up' Capitol, police chief warns