For the first time in history, US scientists at the National Ignition Facility at the Lawrence Livermore National Laboratory in California successfully produced a nuclear fusion reaction resulting in a net energy gain, a source familiar with the project confirmed to CNN.

Here’s what you need to know about this new form of nuclear energy that could eventually turn on your lights and help end dependence on fossil fuels.

What is nuclear fusion and why does it matter?

Scientists around the world have been studying nuclear fusion for decades, hoping to recreate it with a new source that provides limitless, carbon-free energy – without the nuclear waste created by current nuclear reactors. Fusion projects mainly use the elements deuterium and tritium – both of which are isotopes of hydrogen.

The deuterium from a glass of water, with a little tritium added, could power a house for a year. Tritium is rarer and more challenging to obtain, although it can be synthetically made.

“Unlike coal, you only need a small amount of hydrogen, and it is the most abundant thing found in the universe,” Julio Friedmann, chief scientist at Carbon Direct and a former chief energy technologist at Lawrence Livermore, told CNN. “Hydrogen is found in water so the stuff that generates this energy is wildly unlimited and it is clean.”

How is fusion different from nuclear fission?

When people think about nuclear energy, cooling towers and mushroom clouds may come to mind. But fusion is entirely different.

Whereas fusion fuses two or more atoms together, fission is the opposite; it is the process of splitting a larger atom into two or more smaller ones. Nuclear fission is the kind of energy that powers nuclear reactors around the world today. Like fusion, the heat created from splitting atoms is also used to generate energy.

Nuclear is a zero-emission energy source, according to the Department of Energy. But it produces volatile radioactive waste that must be stored safely and carries safety risks. Nuclear meltdowns, although rare, have occurred throughout history with wide-ranging and deadly results such as at the Fukushima and Chernobyl reactors.

Nuclear fusion does not carry the same safety risks, and the materials used to power it have a much shorter half-life than fission.

How could nuclear fusion power eventually turn the lights on in your house?

There are two main ways to generate nuclear fusion, but both have the same result. Fusing two atoms creates a tremendous amount of heat, which holds the key to producing energy. That heat can be used to warm water, create steam and turn turbines to generate power – much like how nuclear fission generates energy.

The big challenge of harnessing fusion energy is sustaining it long enough so that it can power electric grids and heating systems around the globe. The successful US breakthrough is a big deal, but it’s still on a far smaller scale than what’s needed to generate enough energy to run one power plant, never mind tens of thousands of power plants.

“It’s about what it takes to boil 10 kettles of water,” said Jeremy Chittenden, co-director of the Centre for Inertial Fusion Studies at Imperial College in London. “In order to turn that into a power station, we need to make a larger gain in energy – we need it to be substantially more.”

Why is DOE’s forthcoming announcement about a fusion reaction resulting in a net energy gain important?

This is the first time scientists have ever successfully produced a nuclear fusion reaction resulting in a net energy gain, instead of breaking even as past experiments have done.

While there’s many more steps until this can be commercially viable, it’s essential for scientists to show that they can create more energy than they started with. Otherwise, it doesn’t make much sense for it to be developed.

“This is very important because from an energy perspective, it can’t be an energy source if you’re not getting out more energy than you’re putting in,” Friedmann told CNN. “Prior breakthroughs have been important but it’s not the same thing as generating energy that could one day be used on a larger scale.”

Where does the fusion take place?

Several fusion projects are in the US, United Kingdom and Europe. France is home to the International Thermonuclear Experimental Reactor, on which thirty-five countries are collaborating – including main members China, the United States, the European Union, Russia, India, Japan and South Korea.

In the US, much of the work is happening at the National Ignition Facility at the Lawrence Livermore National Laboratory in California, in a building that spans the size of three football fields.

The west gate entrance to the US Department of Energys Lawrence Livermore National Laboratory in Livermore, California, US, on Monday, Dec. 12, 2022. Researchers at the laboratory near San Francisco were able produce a fusion reaction that generated more energy than it consumed, according to a person familiar with the research who requested anonymity to discuss results that have not yet been fully disclosed in public. Photographer: David Paul Morris/Bloomberg via Getty Images

The National Ignition Facility project creates energy from nuclear fusion by what’s known as “thermonuclear inertial fusion.” In practice, US scientists fire pellets that contain hydrogen fuel into an array of nearly 200 lasers, essentially creating a series of extremely fast, repeated explosions at the rate of 50 times per second. The energy collected from the neutrons and alpha particles is extracted as heat.

In the UK and the ITER project in France, scientists are working with huge donut-shaped machines outfitted with giant magnets called a tokamak to try to generate the same result. After fuel is put into the tokamak, its magnets are turned on and temperatures inside are raised exponentially to create plasma.

Plasma needs to reach at least 150 million degrees Celsius, 10 times hotter than the core of the sun. The neutrons then escape the plasma, hitting a “blanket” lining the walls of the tokamak, and transferring their kinetic energy as heat.

What are the next steps?

Scientists and experts now need to figure out how to produce much more energy from nuclear fusion on a much larger scale.

At the same time, they need to figure out how to eventually reduce the cost of nuclear fusion so that it can be used commercially.

“At the moment we’re spending a huge amount of time and money for every experiment we do,” said Chittenden. “We need to bring the cost down by a huge factor.”

Scientists will also need harvest the energy produced by fusion and transfer it to the power grid as electricity. It will take years – and possibly decades – before fusion can be able to produce unlimited amounts of clean energy, and scientists are on a race against the clock to fight climate change.

“This will not contribute meaningfully to climate abatement in the next 20-30 years,” Friedmann said. “This the difference between lighting a match and building a gas turbine.”

Authorities are investigating the gunman’s motive after Monterey Park massacre 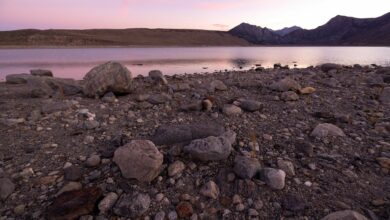