Facebook Twitter LinkedIn
North Korea said it successfully tested a miniaturized hydrogen nuclear device on Wednesday, claiming a significant advance in the isolated state's strike capability and setting off alarm bells in Japan and South Korea.
The test, the fourth time North Korea has exploded a nuclear device, was ordered by young leader Kim Jong Un, state media said.
"The first H-bomb test was successfully conducted at 10:00 (2030 ET) on Wednesday," North Korea's official KCNA news agency said.
Last month, Kim appeared to claim his country had developed a hydrogen bomb, also known as a thermonuclear device, a step up from the less powerful atomic bomb, but the United States and outside experts were sceptical at the time.
South Korean intelligence officials and several analysts questioned whether Wednesday's explosion was indeed a full-fledged test of a hydrogen device.
The device had a yield of about 6 kilotons, according to the office of a South Korean lawmaker on the parliamentary intelligence committee – roughly the same size as the North's last test, which was equivalent to 6-7 kilotons of TNT.
"Given the scale, it is hard to believe this is a real hydrogen bomb," said Yang Uk, a senior research fellow at the Korea Defence and Security Forum.
"They could have tested some middle stage kind (of device) between an A-bomb and H-bomb, but unless they come up with any clear evidence, it is difficult to trust their claim."
Joe Cirincione, a nuclear expert who is president of Ploughshares Fund, a global security organization, said North Korea may have mixed a hydrogen isotope in a normal atomic fission bomb.
"Because it is, in fact, hydrogen, they could claim it is a hydrogen bomb," he said. "But it is not a true fusion bomb capable of the massive multi-megaton yields these bombs produce".
The United States Geological Survey reported a 5.1 magnitude quake that South Korea said was 49 km (30 miles) from the Punggye-ri site where the North has conducted nuclear tests in the past.
North Korea's last test, of an atomic device in 2013, also registered at 5.1 on the USGS scale.
The test nevertheless may mark an advance of North Korea's nuclear technology. The claim of miniaturizing, which would allow the device to be adapted as a weapon and placed on a missile, would also pose a new threat to the United States and its regional allies, Japan and South Korea.
UN meeting
North Korea has been under UN Security Council sanctions since it first tested an atomic device in 2006 and could face additional measures. The Security Council will meet later on Wednesday to discuss what steps it could take, diplomats said.
The White House said it could not confirm North Korea's claims, but added the United States would respond appropriately to provocations and defend its allies.
Prime Minister Shinzo Abe said Japan would make a firm response to North Korea's challenge against nuclear non-proliferation.
"North Korea’s nuclear test is a serious threat to our nation’s security and we absolutely cannot tolerate it," Abe told reporters. "We strongly denounce it."
South Korea said it would take all possible measures, including possible United Nations sanctions, to ensure Pyongyang paid the price after its fourth nuclear test.
"The government must now work closely with the international community to ensure that North Korea pays the commensurate price for the latest nuclear test," President Park Geun-hye said in a statement. "We must respond decisively through measures such as strong international sanctions."
The North's state news agency said it will not give up its nuclear program as long as the United States maintained what it called "its stance of aggression".
It called the device the "H-bomb of justice" and said: "The US is a gang of cruel robbers which has worked hard to bring even a nuclear disaster to the DPRK," using the official acronym for North Korea.
However, the agency said Pyongyang will act as a responsible nuclear state and vowed not to use its nuclear weapons unless its sovereignty was infringed. It said it will not transfer its nuclear capabilities to other parties.
While a fourth nuclear test had been long expected, the timing of Wednesday's explosion came as a surprise.
The test is bound to ratchet up tensions between the isolated country and its neighbors as well as Washington. China, North Korea's main ally, has not commented on the test but is likely to be displeased at the increase in tensions in its neighborhood.
China's Xinhua state news agency said the test ran counter to the goal of decentralization and warned that any practice that disrupts stability in northeast Asia is "undesirable and unwise".
The test site is only about 90 km (55 miles) from the border with China, and residents there said they felt tremors at the time.
Tags
north korea nuclear bomb united nations 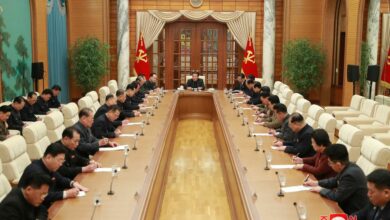