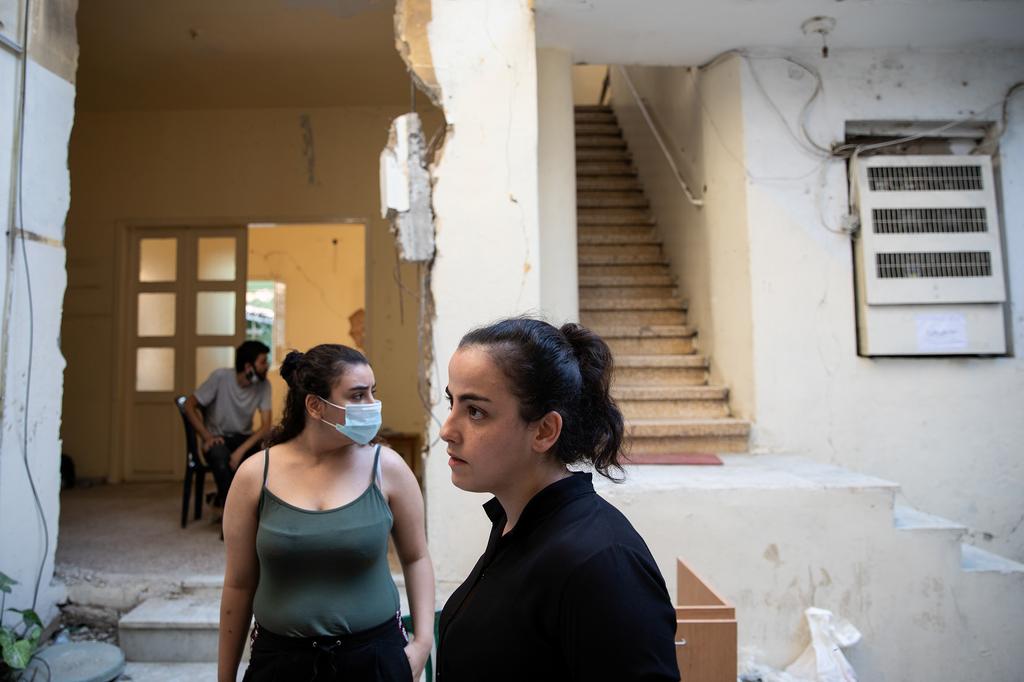 “The other day, I was trying to open a jar and the popping sound made me jump back and scream. I felt for a second I needed to run away.”

Despite recognising the magnitude of her ordeal, Sandra, 18, said she was not interested in seeking professional help. “We’re used to dealing with our problems on our own,” she said, stoically.

Her attitude is common in Lebanon, a country hardened by past wars and sectarian conflict and where stigma still rules attitudes towards mental health.

But the blast caught Lebanon at an extremely vulnerable point following months of severe economic crisis compounded by the coronavirus pandemic.

Now practitioners are warning of a national mental health emergency as people begin to show signs of trauma from the explosion, including nightmares, flashbacks, crying, anxiety, anger and exhaustion.

Psychologists say this is being exacerbated by the constant stream of images on Lebanese TV and social media showing the blast and its bloody aftermath.

“Every time we say it can’t get worse in Lebanon, it somehow does,” said Jad Daou, a volunteer with Lebanese mental health NGO Embrace, who mans the phones at its crisis clinic. “A lot of people are feeling hopeless about the entire situation here in Lebanon.”

The explosion was a tipping point. Embrace, which usually receives between 150-200 calls a month, says more people have been reaching out since the blast. The group has stationed volunteers in one of the affected neighborhoods and has started home visits.

Many mental health professionals have mobilized in the wake of the blast to offer their services and post tips on social media, but some are struggling to cope themselves.

“I never had psychologists say, ‘we are not ready to talk at this moment. I need time to heal for myself,’” said psychologist Warde Bou Daher. “But the trauma affected everyone … they need to heal their own wounds before being able to help others.”

While Sandra insists she has not cried once since it happened, her cousin cannot hold back tears as she recounts her experience of the explosion, which wounded 6,000 people and was so loud it could be heard as far as Cyprus, 100 miles (160 kms) away.

When the blast hit, Lourdes Fakhri ran from the supermarket where she works to her home in the Karantina neighborhood near the port, one of the worst affected, fearing that her family had been killed.

“There was rubble everywhere, so high. I could picture them all lying there on the floor, with our house on top of them.”

Lourdes’ parents and six siblings survived but the feeling of terror has remained with her.

For older Lebanese, the blast triggered memories of the 1975-1990 civil war and the 2006 war with Israel among others.

Many have never dealt with their traumas and don’t know how to help their children, said Ola Khodor, a 25-year-old child psychologist.

“A lot are telling their children that nothing happened, that it was a game,” Khodor said. “The child deserves to know the truth – not the very detailed truth, but they deserve to know what exactly happened to allow them to grieve and to process the event like they need to.”

Experts say trauma begins to set in several weeks after an event, as people progress out of a period of “acute stress”. Unicef on Friday estimated that half of the children they have surveyed in Beirut are already showing signs.

One father told Reuters that when his four-year-old son came back home for the first time after the explosion, he invented a game called “pretend boom” in which his playhouse was hit by an explosion and rabbits needed rescue from the broken glass.

Image: Lourdes Fakhri, 24, and Sandra Abinader, 18, are seen at the yard of the damaged building they live in, in the aftermath of a massive explosion at the port area, in Beirut, Lebanon, August 22, 2020. Picture taken August 22, 2020. REUTERS/Alkis Konstantinidis

‘End of the world’: Countdown to Beirut’s devastating blast

Fighters and farmers step in to help Beirut after the blast