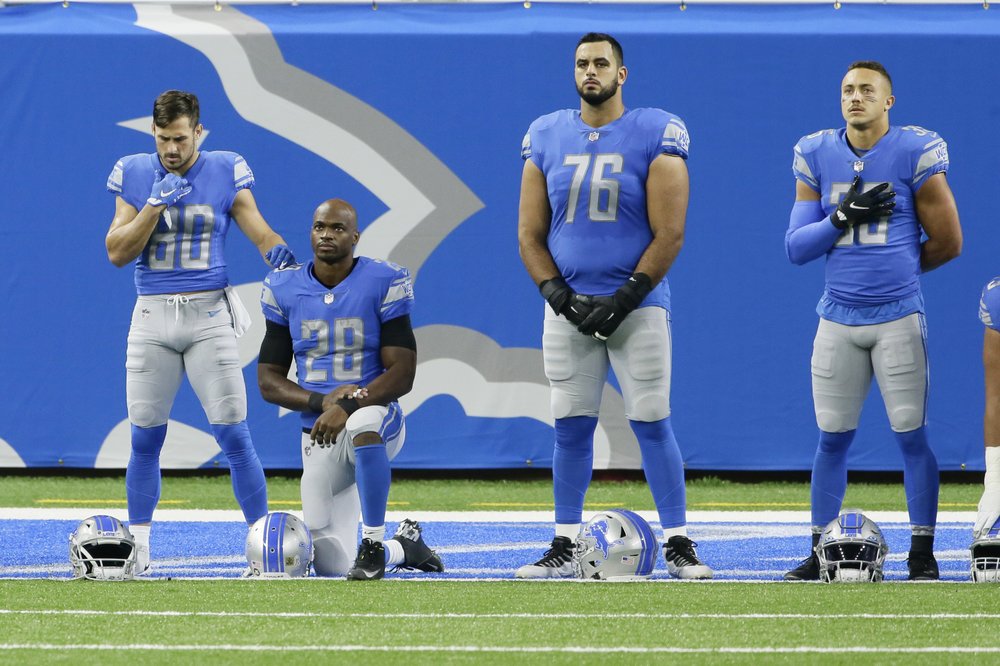 ALLEN PARK, Mich. (AP) — NFL players have kneeled during the national anthem and taken stands to protest social injustice across the United States.

Detroit Lions guard Oday Aboushi wants to use his place in sports and society another way, by shedding light on the plight of Palestinians and promoting religious harmony as a Muslim with friends of different faiths.

“Being an athlete, playing in the NFL, being Palestinian is rare,” Aboushi said in an interview with The Associated Press. “It doesn’t happen much, but at the same time it comes with a lot of responsibility. And I feel like having this platform allows me to use that responsibility in a positive way.”

The 29-year-old Aboushi made his second start of the season and the 36th of his career on Sunday, helping Detroit beat Washington 30-27.

The Lions made a statement as a team last summer, choosing not to practice as a form of protest after a Black man, Jacob Blake, was shot by police in Wisconsin. Aboushi was front and center as his teammates spoke to reporters about their decision outside the team’s practice facility.

And as a player in the powerful league, coincidently playing in an area with a large Arab American population, Aboushi wants to use his voice to speak up for people in his parents’ homeland.

“There is this call of not staying silent and using our places of position to elevate those that feel unheard and unseen for such a long time,” said US Representative Rashida Tlaib, a Democrat from Detroit. “People can relate to us as activists — me as a girl from southwest Detroit, him the NFL player.”

Aboushi’s parents emigrated to New York after both were born in east Jerusalem, a part of the world that regularly makes international news.

On Monday, European diplomats visited the site of an Israeli planned settlement expansion in east Jerusalem that threatens to cut off parts of the city claimed by Palestinians from the West Bank. Israel has long dismissed international criticism of settlement activity.

Palestinians want a future state that includes east Jerusalem and the West Bank — territories occupied by Israel in the 1967 war — and view settlements as a major obstacle to peace.

Aboushi visited the West Bank in 2009, when he talked with orphans and said he witnessed Palestinians being held at checkpoints.

“It was a huge eye-opener for me as far as what it’s like to be back in Palestine in its current situation right now with the occupation of Israel,” he said. “The media doesn’t show that and continues to kind of turn a blind eye to the mistreatment of the Palestinian people.”

Aboushi plays in relative obscurity as an offensive linemen, but he’s hailed in the Arab American community in the Motor City.

Azzam Elder, an attorney in the area, met Aboushi shortly after he signed with the Lions last year and has become one of his many new friends.

“Oday Aboushi is basically another beautiful story in the American dream,” said Elder, who is also Palestinian-American. “From a Palestinian perspective, it’s just beautiful to be able to sit in the stands and watch all these great players and happen to know somebody who happens to have your background.”

When Aboushi moved to Michigan, he posted on Twitter that he was looking to help mosques and families with iftar, a feast for Muslims after they break their fast during Ramadan. He subsequently gave back in one of the many ways he has served the community in Detroit.

Aboushi, who speaks Arabic, was among about a dozen Muslim athletes honored in 2011 at a reception hosted by then-Secretary of State Hillary Clinton at the State Department in Washington while he attended the University of Virginia.

When he was in college, one of his roommates, Michael Strauss, became one of his best friends and proved a Muslim man and a Jewish teammate could do more than simply coexist.

“When he got on campus, we kind of clicked,” Aboushi recalled. “We just were complete opposite, but we both had very similar hearts and passion and that’s what helped bring us together. He has always been respectful of my beliefs, and I’ve been respectful of his beliefs. We had a lot of conversations about religion, cultures and traditions. He’s someone that will be in my life probably for the rest of my life and someone that I consider family.”

Aboushi considers his teammates, of all backgrounds, his brothers. He praised former San Francisco 49ers quarterback Colin Kaepernick for sparking a movement in 2016, when he started taking a knee during the national anthem to protest systemic racism.

NFL Commissioner Roger Goodell said last summer the league was wrong for not listening to players fighting for racial equality and encouraged them to protest peacefully.

“We’re all fighting for the same thing,” Aboushi told the AP. “Palestinians are going through a very similar situation as we have here with African Americans as far as the way they’re being treated through systematic oppression.

“I feel like this is the time, more than ever, to talk about it and to continue to enlighten people and to let people know that, `Hey, it’s not only something that’s happening in America. This is a worldwide issue.′ This is something as a world that we can continue to work on to get better.”

Detroit Lions offensive guard Oday Aboushi (76), stands with wide receiver Danny Amendola (80), running back Adrian Peterson (28) and safety Miles Killebrew (35) during the national anthem before an NFL football game, Sunday, November 15, 2020, in Detroit. NFL players have kneeled during the anthem and have made stands to protest social injustice, but none have done it in quite the same way as Aboushi. He wants to use his platform to shed light on what he says is Israel’s oppression of the Palestinians and to promote religious harmony as a Muslim with friends of different faiths. (AP Photo/Duane Burleson)