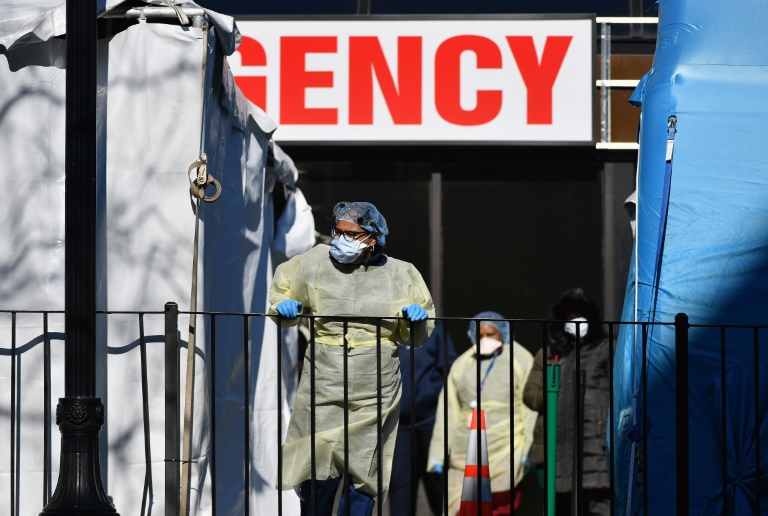 Medical staff in America’s coronavirus hotbed New York are struggling with long hours and a dire need for protective equipment — and as infections surge, they increasingly fear for their own safety.

Doctors and nurses are working around the clock caring for patients hit by the fast-spreading infection, risking their lives on the front lines of the global crisis.

The same week the United States became the new epicenter of the pandemic — posting over 100,000 confirmed cases of infection, including more than 1,500 deaths — Kious Kelly, a nurse manager at a Manhattan hospital, succumbed to a fatal case of Covid-19.

“It’s abysmal,” said Andrew, a psychiatry resident in a New York hospital who spoke on condition his name be changed.

He is now quarantined at home with a likely case of the virus himself.

“There’s not enough money, there aren’t enough tests, there’s not enough personal protective equipment for people who are dealing with this — not just the doctors, but nurses, ancillary staff, janitors — everyone in the hospital who are getting huge exposure to the virus,” the resident told AFP in an interview punctuated by coughs.

Diana Torres, a former colleague of the late Kelly, said hospital staff are “devastated” that “he paid the ultimate price.”

The mother of three told AFP there are units of the hospital filled to the brim with coronavirus patients.

She works in a rehabilitation section of the facility and personally has handled at least three patients known to have the virus — and perhaps more, as a lack of testing makes it impossible to be sure.

Kelly’s death triggered an outpouring of angry posts on social media over inadequate protections — including one viral photo showing staff wearing garbage bags over their scrubs.

Mount Sinai said in a statement it was “grieving deeply” over Kelly’s death — while also emphasizing that “we always provide our staff with critically important PPE.”

But Torres said it took significant pushing to acquire one face shield, just one N-95 respirator mask and one gown — which she said she must reuse.

Andrew is among the many New Yorkers who have fallen ill but has been unable to get tested due to restrictions that reserve scarce tests for the most critical cases.

A week ago he came down with a scratchy throat that evolved into the virus’ customary symptoms: dry cough, body aches, headache, chest pressure and elevated temperature.

Andrew also experienced an abrupt inability to taste or smell — believed to be a sign of infection — and has yet to regain his olfactory senses.

His case is mild, but he worries others in hospitals could develop more severe infections because of constant exposure to sick patients without proper safety measures.

“People on the front lines aren’t getting protected. They’re lambs to slaughter,” he said. “It’s criminal.”

“Being in health care already is a huge sacrifice. It’s such a shame that it has come to this. It has been wholly inadequate by the federal government. More people are going to die.”

Torres fears potentially spreading the infection to her children and husband. “Unless we get tested, we cannot contain the virus within the facility,” she said.

“We are all walking around paranoid, trying to keep our distance from each other because we can’t get tested — unless you are symptomatic and the symptoms are serious enough.”

She says hours are extended and staffing “shorter than ever, because our own staff is getting sick.”

New York Mayor Bill de Blasio has said the city is trying to give health workers “relief” by bringing in reinforcements.

Authorities estimate the state’s peak might not come for three weeks.

For the time being health care workers “don’t really have the luxury of stopping to digest any of this,” said Andrew.

“We don’t have time to digest our feelings — we just have to do it.”

US tops world in virus cases and logs record unemployment