Mohamed el-Balati boards the boat on which he works as a fisherman in Burullus. He scans the Burullus strait, his eyes spotting dozens of other boats at anchor. These boats have raised black flags in objection to the decision of the governor of Kafr el-Sheikh, which obliges all boat owners in the area to enter and exit the Mediterranean Sea through the new Burullus harbor–the very same harbor that President Mubarak inaugurated two weeks ago for maritime navigation.

"Am I going out to work or taking some dead people to their graves?" says the irate el-Balati pointing at the lined up boats hoisting the black flags. "We haven’t been eating or drinking for ten days," he gripes. El-Balati is angry at the governor’s decision forcing boats to set sail through the new harbor which, he says, is unfit for receiving boats and puts their lives in danger.

At a desk at one of the cooperatives for automated fishing boat owners in Burullus sits Hamdi el-Sharabi, the cooperative’s chairman, surrounded by dozens of fishermen. Pointing at the fishermen he says, "All of them are supposed to be in the sea, but the governor’s decision left them without work." He adds, "But we have sent a petition to the presidency about our problem and are awaiting the reply."

Sharabi says that the Burullus harbor was the dream of some 5000 fishermen in the city. The dream materialized around ten years ago when the governorate announced it was beginning the construction of the new harbor. In the past, fishermen used the strait connecting Burullus Lake to the Mediterranean. But when construction of the new harbor began, the fishermen noticed that the entry to the harbor was narrow and couldn’t accommodate all the boats. "For five years we have been calling to have the entry into the harbor extended, but nobody listens to us," says el-Sharabi.

But construction work ended more than six months ago and the calls were neglected. To complicate matters, President Mubarak visited the city two weeks ago and officially inaugurated the harbor. The president watched ten boats enter the harbor, but according to el-Sharabi those boats only made it safely because they were small and the weather was good. Today, fishermen are compelled to use the new harbor because security forces will revoke their permits if they use the old strait.

Mohamed Mokhtar, a boat owner, sits next to el-Sharabi. "There are times when the weather is uncertain. When the waves are high and my boat is out on the sea, who can ensure that my entry to the harbor will be safe?" Mokhtar wonders, adding, "Who will compensate me when my boat breaks at the harbor’s entrance and some of my boatsmen die?" Mokhtar is equally angered by the accusations levelled at the fishermen by the governor, who described the fishermen as "thugs and smugglers."

Khaled Marzouq, another fisherman, says, "Each boat has ten boatsmen, each of whom supports a family, so are they ‘thugs’?" Marzouq defends his fellow fishermen, admitting they went on strike but "very politely and respectably." Marzouq added that the people of Burullus may have been a little rebellious before but, according to him, those times are gone forever and past events are unlikely to be repeated.

Outside the cooperative we met with Ahmed Mohamed, 47, another boat owner. "Harbors are built to protect boats from storms and strong winds, and the old strait did that job," he says, adding that the "natural" strait was more protective than the man-made harbor. The new harbor was built in the opposite direction of the wind flow, and such a defect will overturn boats that try to take shelter in the harbor, says Mohamed. The solution Mohamed proposes is to extend the the entry by 100 meters, making it similar to the Port Said harbor.

Walid Mohamed Ashour, like many other fishermen, had hoped he could present his demands to President Mubarak when the president visited the city to inaugurate the harbor. However, Ashour said that they were unable to do so because security measures were at their tightest levels and the president’s visit was brief.

In protest against the governor’s decision, officials at the Qualitative Federation of Cooperatives sent a complaint to the prime minister and filed a lawsuit against the governor of Kafr el-Sheikh and the agriculture minister at the administrative court. Mohamed el-Feqqi, chairman of the Cooperative Federation for Water Resources, said the lawsuit challenges the legality of the governor’s supervision of the harbor, because the law gives the Fish Resources Authority the right to supervise all fishing harbors in Egypt.

El-Feqqi said that the long experience of fishermen helped them spot the technical defects of the new harbor. But instead of listening to their suggestions and demands, the governor attacked the fisherman, saying that if it is proven that he made the alleged accusations against the fishermen then they will have the right to sue him for slander.

Meanwhile, Hamdein Sabbahi, MP for Burullus, said he had met with Zakaria Azmi, head of the Office of the President, and presented the fishermen’s demands which concern the safety of their boats and the management of the harbor. Sabbahi, for his part, said such a problem could only be solved "through dialogue," saying that Azmi had promised to intervene to resolve the problem.

Sabbahi believes that the current dispute is due to the lack of a protocol to fall back on. Sabbahi further said that the three-month negotiations between the governorate, the Fish Resources Authority and the General Federation of Cooperatives had not reached an agreement and it seemed as if the governor was trying to claim a right that belonged to the Fish Resources Authority, succeeding, in the end, in obtaining authorization from the agriculture ministry to manage the harbor, Sabbahi added.

Sabbahi criticised statements attributed to the governor, describing the fishermen of Burullus as "serious, respectable, [who] have had the courage to free their colleagues from the grip of Somali pirates."

Sabbahi said that he hoped the Egyptian Authority for Maritime Safety would inspect safety precautions at the new harbor and write a report to reassure the fishermen. Sabbahi believes the fishermen have a right to have the entrance to the harbor, which cost millions to build, improved.

Major General Ahmed Zaki Abdeen, governor of Kafr el-Sheikh, allegedly insisted that the fishermen were "smuggling gas, oil and drugs, and stealing the fingerlings in the strait." He supposedly added that the fishermen don’t want a harbor because it would prevent their smuggling activities.

The governor apparently went on to say that the entrance to the harbor "is flawless and was built by the housing ministry and the Urban Development Authority. The harbor has fuel, an ice factory, security, a board of directors and was officially inaugurated by the president after 25 fishing boats entered it." The governor then added that the fishermen were not on strike but rather waiting for the weather to get better.

IMF asks Egypt to limit army’s interference in the economy

Egyptian pound tumbles to LE30 against US dollar, breaking all previous records 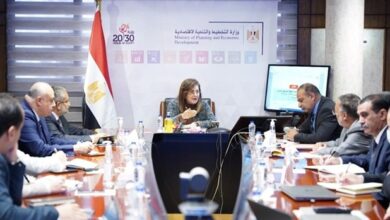