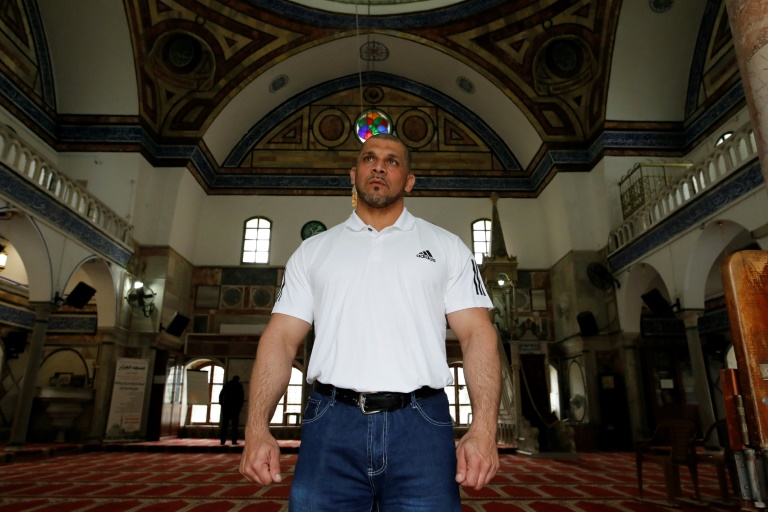 Ibrahim Masri has been the muezzin calling Muslims to prayer for nearly 15 years in an Israeli city but his voice is now being silenced because he took part in a bodybuilding contest.

Israel’s interior ministry is stripping him of his role as chief muezzin of El-Jazzar mosque in the northern city of Acre after having ruled that his participation in the 2017 competition was “incompatible” with his religious role.

Muezzins call Muslims to prayer five times a day through loudspeakers, with the most renowned famed for their voice.

The 46-year-old Masri has been lifting weights since he was young and is well known in Acre. He has never seen a contradiction between his sport and his religion.

“This is an unjust decision,” he told AFP. “The religion of Islam encourages any individual to practice sport.”

A ministry spokesman told AFP he had been fired over his inappropriate dress.

Bodybuilders typically wear brief trunks during competitions and Masri has many photos in such attire.

Masri, who has bulging arms and weighs around 105 kilos (230 pounds), is a member of Israel’s Arab minority, who make up around 18 percent of the Jewish state’s population.

In 2017, he took part in the Israel bodybuilding championships, winning in his category.

A few months later he was summoned to a committee of religious officials in northern Israel.

“They showed me the pictures of me participating in the competition, and they considered it was not appropriate for a muezzin to practice this sport,” the father-of-three said.

They said his scanty clothing was unacceptable for a religious figure.

The interior ministry oversees the religious organizations of Christians, Muslims and other non-Jewish minorities in Israel, and it has the final say over the full-time muezzin’s job.

Masri said he sent them a letter apologizing. “I told them I would not take part in any more competitions.

“They knew I was involved in this sport before I was hired.”

But this month the ministry finally decided to dismiss him, and a spokesman told AFP he was fired effective this week.

“The employee appealed to the state service commission, which concluded that the ministry’s conduct was flawless and the firing was approved.”

El-Jazzar mosque in the Old City of Acre is one of the most beautiful in Israel, built in 1781.

The Mediterranean city is considered a World Heritage Site, with its repository of remains from the Crusades.

The mosque is named after the local Ottoman ruler at the time it was built and its design inspired by the famed mosques of Istanbul.

The muezzin’s firing has caused a stir among Acre’s Muslim majority.

“How can they separate Ibrahim from his work just because he took part in a competition?” asked Wissam Zalafi, a guard at the mosque.

“We don’t have another muezzin with a voice as beautiful in all of Acre.”

Sheikh Mohammed Kiwan, the mosque’s head imam, or prayer leader, said Masri had not asked the administration before entering the bodybuilding competition.

“It is not permissible for him to expose his modesty in front of men, women and children.”

However, the imam said he was in favor of giving Masri a final warning and agreed that he had a beautiful voice.

Masri worked out throughout his time as a muezzin and even helped open a club to train young people in Acre.

Amal Khatib, 19, said the club had helped him focus and to find a job.

Masri has filed an appeal, which will be heard next month, and has started a petition by local supporters.

Jaber Mushahee, an 80-year-old who prays at El-Jazzar, said the decision would damage the mosque.

“I’ve made umrah and there is no voice anywhere more beautiful than his,” said Mushahee, referring to the mini-pilgrimage to Mecca.

Israel moves to mute mosques' call to prayer over loudspeakers

One voice, many mosques: As call to prayer is unified, muezzins defy government orders