President Hosni Mubarak on Thursday inaugurated the opening of a pipeline in Aswan Governorate. He is also due to meet with French counterpart Nicolas Sarkozy, who has already spent two days in the Upper Egyptian city.

Diplomatic sources said both leaders will discuss issues related to the Union for the Mediterranean.

Meanwhile, a number of Nubian community leaders preempted the visit on Tuesday by sending a letter pressing Nubian demands to the president's office. Mounir Bashir, chairman of the Egyptian Nubian Association for Law, said the letter demands president Mubarak to relocate Nubian citizens around Lake Nasser, which lies below the High Dam, instead of housing them at in the Wadi Qurqur region.

Aswan authorities beefed up security preparations ahead of the visit. Students and teachers were ordered not to attend school on Wednesday and Thursday as security forces were using school premises for housing. Local authorities worked on cleaning the city’s main roads and squares. Fliers welcoming the president were hung across streets.

Egypt’s government has recently begun complying with Nubian minority demands. Nubians call for being relocated after large numbers of them were evacuated to pave the way for High Dam construction in 1960. In August, the Ministry of Housing announced that the government has completed 70 percent of the first stage of a government project that aims to relocate Wadi Qurqur’s displaced Nubians.

A crucial Russian gas pipeline has been shut for repairs. Will it ever reopen? 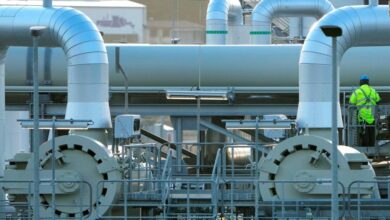 The Nord Stream 2 pipeline is on the scrap heap because of the Ukraine crisis. Here’s why that matters