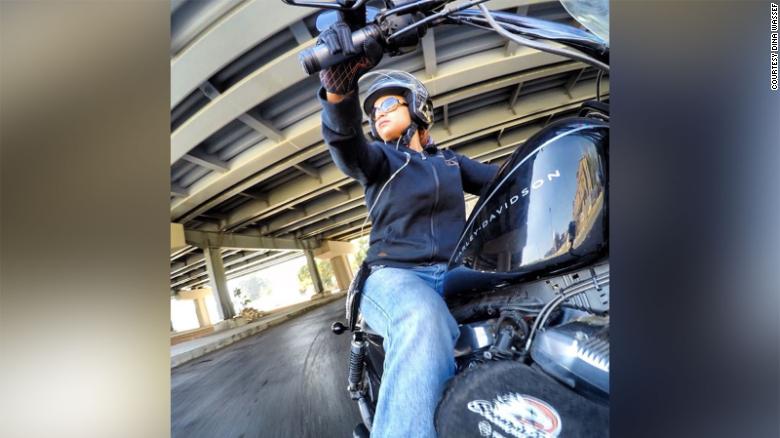 On the congested streets of Cairo, Egypt’s capital city, rider Dina Wassef is mounting a motorcycle, presenting a rare sight.

With a population of 104 million, Egypt is a conservative country where it is uncommon for women to be spotted on motorcycles.

Wassef learned to ride bikes in 2008, challenging the trend in the North African country that excluded women from doing certain things like publicly riding motorcycles and bicycles.

She was among the first women in Egypt to publicly ride a motorbike, according to a report in the Women of Egypt Mag.

The 35-year-old told CNN that her inspiration to get a motorcycle was as a result of landing a sales job with Harley-Davidson, an American-owned motorcycle manufacturer.

“When I started at Harley-Davidson in Egypt, I was very intrigued about the motorcycles I was supposed to be selling. I kept wondering, how can I convince people to buy the motorcycle if I am not riding it?” she said.

“I decided to start training on how to ride with the house trainer. I took lessons after work, and during my break time. I purchased my first motorcycle in 2009 and I customized it,” she added.

In 2010, Wassef started riding publicly. She said it was so unusual to see a woman riding a bike at the time that many people stopped to take photos with her.

“In the streets, people were surprised to see me riding. Every time I wore the helmet and turned on the engine I knew the show was about to begin. I used to enjoy watching people’s faces smiling and waving at me,” she said.

But compared to when Wassef first started riding bikes, there are now more women riders on the streets of Egypt, and groups teaching and encouraging them to ride various kinds of motorbikes.

Let’s Scoot, a scooter movement for women in Alexandria, was created in 2014 and is teaching them to ride motor scooters.

A motor scooter is like a regular motorcycle but with smaller wheels and engine.

Similarly, the Egyptian Women Riders club, which Wassef is a part of, is an all-female motorcycle club that encourages women across the country to take trips on motorcycles.

Maggie Mamdouh, a scooter training instructor based in Cairo, says one of the primary reasons women are now hitting the roads with motorcycles and scooters is to manage the city’s chaotic traffic.

“Motorbikes and scooters are a fast and affordable way to reach your destination because Egypt is a bit crowded,” she told CNN.

According to a report by the World Bank, traffic volumes are in the range of 3,000 to 7,000 vehicles per hour on major corridors in cities like Cairo, Giza, and Qalyub.

The report adds that as a result of poor traffic management and poor road networks, road trips in the country can take more than double the expected time.

Mamdouh told CNN that women like her are leaning toward scooters and bicycles as they can easily maneuver small spaces in traffic, reaching their destination faster compared to cars.

“With my scooter, I can reach my destination half an hour before cars if the road is crowded and if it is rush hour,” she explained.

The 26-year-old is an instructor with Dosy, a bicycle and scooter training platform. She learned to ride scooters in 2017 from a friend and is now teaching other women to do the same.

“Women should do whatever they want”

Menna Farouk, co-founder of Dosy, told CNN that women who are eager to learn how to ride are in large numbers in Egypt.

She said she created her startup in 2019 with her sister Nouran after the duo realized there weren’t enough female instructors to teach these women.

“We wanted to learn to ride scooters but we didn’t find any nearby instructors in Cairo. That was when we realized that there is a low supply of instructors and a high demand for people willing to learn how to ride. So, we decided to launch this platform to hire women as scooter instructors to fill the gap,” Farouk said.

According to Farouk, in the first month that Dosy started 300 women showed interest in learning how to ride bicycles and scooters. And since then, the team has trained 1,000 women.

Even though more women are taking interest in riding bicycles and scooters, it is still considered unusual in Egypt, Farouk said.

Through startups like hers, the 27-year-old is hoping such cliches are no longer held as the norm.

“One of our aims is to smash these stereotypes about women riding scooters and bicycles. And convince society that women should do whatever they want, including riding bicycles,” she said.

Wassef who has been riding a motorcycle for about 12 years now, says women interested in learning should do so regardless of societal stereotypes.

She added that people will eventually get used to seeing them hitting the roads with bikes.

“Every woman who has the idea in mind should make it happen. Go get your bike, life is too short.”

Image: Dina Wassef has been riding motorycles on the streets of Egypt since 2008. (Dina Wassef via CNN)