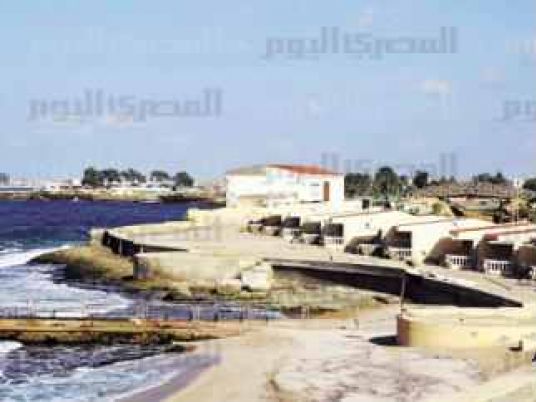 Privately-owned beach cabins of al-Montaza district in Alexandria have become a problem for its owners, after Tourism Minister Hesham Zaazou made a decision to withdraw 681 cabins. The crisis made former Interim President Adli Mansour intervene by forming a committee to resolve the issue.

However, Zaazou ignored the decision making another one in October ordering the forcible evacuation of the cabins without approaching owners affiliated with former President Hosni Mubarak.

The owners resorted to courts to stop the decision and filed complaints to President Abdel Fattah al-Sisi demanding his intervention. Prime Minister Ibrahim Mehleb postponed the decision to resolve the crisis.

The problem offered a chance for negligence to occur at Montazah. The lounge of former President Mohamed Anwar al-Sadat deteriorated. Garage of the royal train turned to a shelter for outlaws.

The 896 cabins, of areas between 15-30 meter squares) stretch along six beaches of Aida, Nefertiti, Semiramis and others. All of them are rented by contracts. Conflict between the renters and Al-Montazah company started in 2013 when Zaazou made the decision, which was then appealed at the Administrative Court. The challenge is still being reviewed.

On 19 February, Mansour ordered formation of a committee from ministries of tourism and finance as well as Al-Montazah Company for Tourism and Investment to resolve the crisis. He also ordered the committee to set the rate of fair rent. Made by an executive authority, which is higher than powers of the minister, the decision should cancel that of the minister by law. However, the minister did not implement the president’s decision.

Instead of forming the committee, Zaazou surprised the cabin owners with decisions on 15 October describing 164 owners as violators and demanding from Interior Ministry to forcibly evacuate them. Most of the cabins owned by Mubarak-era figures were not included. He said also that the renters did not pay for the rent, despite his earlier instructions to the company not to get the rent, which made the renters pay at the court treasury according to law

The decision was faced by angry reactions, especially by those described as violators, who have been living there for decades. Some of these cabins are rented by artistic, political and diplomatic figures who are committed to paying for the rent for decades ago.

The angry renters staged many vigils against the minister and threatened escalation. They filed 207 lawsuits at courts of Cairo and Alexandria.

Actor Hassan Youssef said he has been renting the cabin since 1967 and paying for the rent until 2013. He expressed wonder about the tourism minister’s decision ordering withdrawal of the cabins and instructing security troops to forcibly get the renters out.

Tourism Minister: No stepping back from forcible evacuation

Zaazou said he is committed to the law and that he sent the renters’ contracts to legal experts at the ministry. They said the contracts were administrative not civilian ones. Zaazou denied receiving any written decision from Mehleb halting his decision.

He added that he sent Mansour’s decision to the State Council to get opinion on it. However, it gave no opinion for experiencing embarrassment. Zaazou said he does not have disputes with anyone, adding that many of the renters are his friends. However, he said he is governed by law.

Palaces and gardens.. from nobles’ houses to tourist places

Montazah has three royal luxurious palaces in Egypt. The most well-known palace is Al-Montazah, whose construction dates back to Khedive Abbas Helmy II in the year 1892 Built on the Byzantine style, the palace was constructed on a hill that is 16 meters higher than the sea level. It lies at the place where Alexandria corniche ends

The palace could be accessed via three gates. The first was built by King Fouad and was allocated for access of the king and his entourage. The second one separates between al-Maamoura area and the palace and was allocated for the servants. The third one is next to the railways station and was used as a store for the royal train, that used to take the king from the palace to any destination he wanted to go to.

The palace also includes a racetrack to teach the princesses horse riding and an old windmill in addition to a vast area that overlooks the beach starting from Ramsis coast reaching until Aida coast.

Shock is the first reaction to approaching the chalet or the rest that former president Sadat used to go to. It was designed by the architect Gamal Bakry in 1974.Destroyed by the sea, the company did not carry out maintenance or precautionary measures to protect it.

The abandoned chalet was designed on three levels. The highest on the street level, whereas the lowest at the sea level, from which Bakry made a natural swimming pool. Now, the chalet turned to a garbage dump.

The royal train in Maamoura, or the third entrance of Montazah Palace, turned to a shelter for outlaws, after being a significant mark of the palace until the sixties. No rail bars were found at the garage which stretches for around 100 meters.

Negligence clearly occur at the garage, located at vital place. Only insults and love words written on the walls by outlaws who came at nights to the royal palace that was placed one day under strict security measures.

The royal train was established in 1851 when Khedive Abbas I thought of building railways like the British to link between Cairo and Alexandria. He started then negotiations with the company of Stephenson, who first produced the locomotive, to carry out the project. The company offered the khedive a royal locomotive.

Montazah Company Chief: I resigned upon minister’s rejection to the presidential committee

Major General Samir Zaki, former head of Montazah company, revealed circumstances of the minister’s decision over withdrawal of the cabins and offering them at public tender.

In remarks to Al-Masry Al-Youm, Zaki said that he found out that the company is burdened with costs of maintenance, electricity and water upon the withdrawal decision and rejection to receive the rent.

Zaki said that he told the minister that Montazah cabins have special nature as its renters are of diplomatic and political figures in addition to its location near to the Montazah royal palace, where senior visitors reside during their accommodation. However, the minister requested from him to find a solution. Zaki said that he demanded from him to call Major General Mamdouh Morsy, presidential chief of staff, given that the place belongs to presidency. There was coordination with Morsy which resulted in a memorandum that led to issuance of decision by Mansour to form the committee including representatives from ministries of finance and tourism as well as the company to re-evaluate the rents.

The minister, according to Zaki, got angry after the presidential decision and accused Zaki of taking decisions by himself without getting back to the minister. Zaki said he informed about that step and then submitted resignation.

Zaki explained that he had plans to develop the place, but that was before his resignation.

Amer abu Heif, lawyer defending the cabin owners, said the company runs the gardens of Montazah for interests of Tourism Minister. Contracts stricken are civilian not administrative, thus the

Abu Heif explained that there are three types of the contracts. First type from the fifties until 2014. Renters paid the rent to the Montazah company. These contracts cannot be described as administrative, he said. Second type is for renters who inherited the cabins after their original owners died and they continued to pay the rent. This type is civil contract. Third type is the original owner who ceded the cabin for sum of money. The original owner did not pay before the company agreed on that process between the two parties.

The company then held a public tender on 48 of Aida beach cabins that were ceded by Mubarak-era figures.

Each cabin was sold at LE1,350,000. The ministry then held another public tender to rent 27 cabins for 10 years by usufruct. Only one cabin was given to a businessman at LE31,000.The tender failed to sell the rest of cabins due to the week attendance.

Some cabins were not sold for not reaching the value set by the ministry.

Nothing has been made after Mehleb intervened and referred the whole issue to a committee to resolve the conflict.