Mona al-Khodairy dreamed of breaking the long-held practice in Egypt of restricting certain jobs to men. Her dream evolved into an even bigger goal: to give women new employment opportunities while playing a vital role in safeguarding the environment.

Khodairy, a graduate from the Faculty of Engineering in Assiut, launched a startup, Ecotaqa, at age 26. It aimed to help solve the problem of energy shortages and solid waste management in Egypt by expanding biogas production. The technique uses organic materials from agricultural waste and animal manure, breaking them down in the absence of oxygen to produce energy that can be used as cooking gas.

At the beginning of her entrepreneurial journey, Khodairy was keen to develop her business with professional know-how. She underwent extensive, comprehensive training in a new program named “Enhancing youth employability and local economic development in Upper Egypt.”

The program put her on the right track, teaching some efficient marketing approaches and fostering her technical skills. Under the auspices of the Ministry of Industry, Trade, and Small and Medium Projects, funded by the Japanese government and managed by United Nations Industrial Development Organization (UNIDO), the program provided her with indirect financial support through widening her network and attracting potential investors.

“Peasants suffer from an energy crisis that has hit the country over recent years, particularly in rural residential areas,” Khodairy explained during a symposium in Nahdet al-Mahrousa. She noted that buying gas cylinders creates a financial burden for those with limited income, saying, “Some peasants asked me to build a biogas unit for them.”

The biogas technique also converts organic waste to a slurry, a nutrient-rich fertilizer that serves as an organic substitute for chemical fertilizers without their negative agricultural impact.

These biogas units create employment opportunities – notably for women. Individuals, both male and female, can now create their own small businesses selling excess fuel and fertilizer that they produce with the units. Khodairy told Egypt Independent, “Some peasants employ a biogas system not only for increasing their crops, but also as an investment project to sell fertilizers to others.”

One biogas unit currently costs LE6000 ($340 USD). According to Khodairy, profits gained from the unit can cover its price within three months or so.

Khodairy’s initiative has great potential, said Ahmed Huzzayin, an engineer and manager at the United Nations Industrial Development Organization. “Ninety-seven percent of solid waste in Egypt is not employed in a suitable manner. If solid waste in Egypt is recycled, 1.6 million job opportunities could be provided,” he explained to Egypt Independent.

The project took off in 2014 and Ecotaqa built 90 units in several of Egypt’s governorates over the course of one year. Since then, the startup has built more than 240 units of different sizes across eleven governorates, including Luxor, Assuit, Dakahlia, Fayoum, Qena, Sharkia, Sohag and Minya.

Ecotaqa teamed up with the International Organization of Employers (IOE) to train tens of engineers and workers in the governorate of Monufia, resulting in the construction of 20 units. The success of the first workshop with IOE paved the way for more partnerships in other governorates.

Khodairy did face some social backlash at first. “In the very beginning, I approached women as an indirect way to convince their husbands or sons, as most men in small villages voiced doubts about investing their money in a project run by a female engineer,” she said. This strategy empowered women in rural areas, who helped turn Khodairy’s vision into reality.

Once the project proved to be successful, she said the social barriers started to come down. “I was able to build credibility and trust over time based on word of mouth and the benefits gained from the units.” 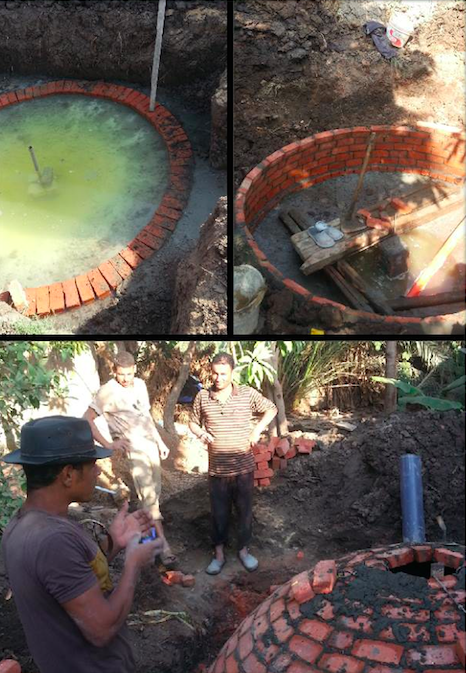 Stages of constructing a biogas unit.

Note: This article has been updated to include recently received information.

Exceptional subsidies to be provided to poor over 6 months: official