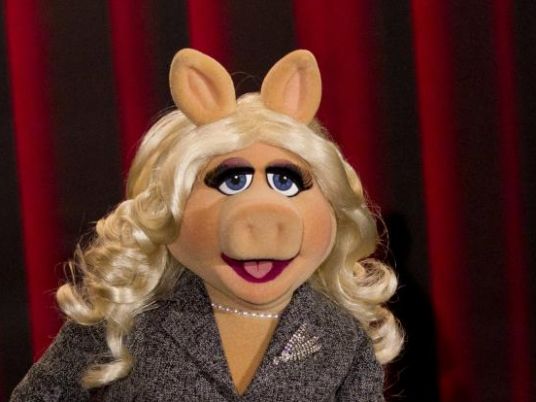 Screen and TV star, diva and beloved Muppet, Miss Piggy, is being recognized for her contributions to society with a feminist award at the Brooklyn Museum in New York on Thursday.
The glamorous, outspoken pig will receive the award at the evening ceremony from the Elizabeth A. Sackler Center for Feminist Art. The presentation will include a conversation with veteran women's rights campaigner Gloria Steinem and a 20-minute video retrospective of Miss Piggy's career.
"Moi is thrilled, but frankly, not surprised to be receiving this Sackler Center First Award," Miss Piggy said in a statement.
"It is truly wonderful to be celebrated and share this honor with fellow legends, role models, and pioneers of female fabulosity. We rock!"
Miss Piggy's long-time squeeze, Kermit the Frog, will be in the audience for the ceremony.
The annual Sackler Center First Awards honor extraordinary women who are first in their fields. Elizabeth A. Sackler, the president of the center for feminist art, theory and advocacy for women's issues, said Miss Piggy embodies exceptional spirit, determination and grit and has taught important lessons about overcoming obstacles to generations of fans.
Miss Piggy starred in "The Muppet Show," that ran from 1976 to 1981, and has appeared in films, including 2014's "Muppets Most Wanted."