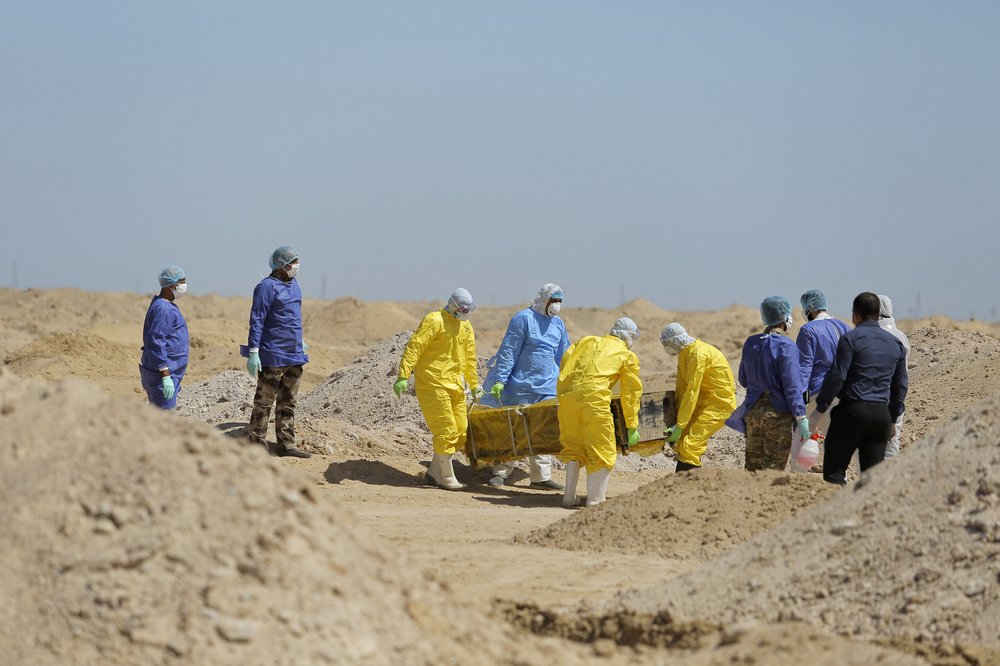 BAGHDAD (AP) — Mohammed al-Dulfi’s 67-year-old father died on March 21 after a brief struggle against the new coronavirus, but it would take nine days for his body to find a final resting place in the Shia holy city of Najaf in southern Iraq.

On two occasions, the family rejected remote burial plots proposed by the government outside Baghdad for him and seven other coronavirus victims, al-Dulfi said. A fight broke out between the families and the Health Ministry’s team. His father’s corpse waited in a hospital morgue for days.

“We were suffering immensely, knowing my father was deceased but we could not bury him,” said the 26-year-old.

Across the Middle East and parts of South Asia, bereaved families have faced traumatic restrictions on burying their dead amid the pandemic. Religion and customs that require speedy burials in the largely Muslim region have clashed with fears of COVID-19, the illness caused by the virus, and government-mandated lockdowns.

As the regional death toll surpasses 4,500, ancient rituals — bodies solemnly washed by relatives, wrapped in white shrouds and buried as quickly as possible with large crowds of mourners in attendance — are being disrupted by the growing outbreak.

In Egypt, where funerals were once an affair bringing dozens of families together in prayer, strict limits have put a cap on attendees. With faces covered in masks, they now bid farewell to loved ones interred in bags stamped “Danger!”

Religious customs are also being upended in Iran, Pakistan and majority-Jewish Israel, where swift burials and large crowds of mourners are also a tradition.

The World Health Organization says in guidelines similar to those issued during the Ebola epidemic that handling of the dead should be minimal and that trained medical teams should perform burials, according to Adham Rashad Ismail, the agency’s head of mission in Iraq.

In the Middle East, this often means religious rites must be modified or canceled.

In Iran, Health Ministry guidelines starkly show how concerned the Islamic Republic remains about the virus, even from the dead. The country has the highest death toll in the region with over 3,700 deaths among over 60,500 confirmed cases.

Once disinfected, the corpse is wrapped in a plastic bag, then carried to a grave site with pallbearers wearing protective gear. The body is interred in a grave sprinkled with lime and buried in concrete. Iran’s state TV recently showed images of clerics wearing special protective suits while performing Islamic burial rituals for victims.

“We want to make sure that our fellow countrymen are not buried without bathing and being wrapped in shrouds,” said a volunteer at one of these televised funerals describing widely-observed practices.

In Egypt, no one is allowed to attend the washing rite except health workers, and those present must wear protective gear and keep at a one-meter distance from the body, according to an internal document obtained by The Associated Press.

The funeral of Attiyat Ibrahim, the country’s first coronavirus victim, was held amid tight security. Only family members were allowed to come to the service in the Nile Delta province of Daqahlia, said Ramadan Mohammed, a village driver.

“There was no funeral prayer call,” Mohammed said. “Police were everywhere, watching and urging people not to stay in groups.”

Further east, in Pakistan, families are allowed to take the bodies to graveyards in their villages but not inside their homes, which is a tradition in the South Asian country.

In Iraq, where over 60 people have died from the virus, some bodies waited several weeks for interment as government epidemic protocols sparked public vitriol.

Baghdad and other provinces initially identified remote burial plots on the peripheries of cities. But families argued that burying their loved ones in such sites was undignified; most Iraqis inter their dead in cemeteries near holy shrines where they can return to pay homage.

Some families spurned the government’s rules entirely. In one instance, relatives snatched two corpses from an unwitting medical team near Baghdad ahead of burial and sped off, according to a police report on March 28. The bodies were later recovered.

In the southern province of Muthana, one family falsified documents of a dead virus victim to say he had died of heart disease, then exhumed the body from the government-designated zone and brought it to Najaf for burial, a government official in the province said.

The official was flummoxed when he learned of the forgery after the second burial. “I don’t know whether to remove the body or not,” he said, requesting anonymity because he wasn’t authorized to discuss the case.

In the case of al-Dulfi, the family argued with health officials until mobilizing support from Iraq’s top Shia cleric. He decreed that all eight bodies could be buried in a plot near Najaf’s Wadi as-Salam cemetery, the final resting place of choice for pious Shiites.

Ismail, the WHO head of mission, said “cultural attitudes” had posed a challenge for the government. By early April, the government rescinded the protocols and burials went ahead in Wadi as-Salam “or in any cemetery the family wants,” Ismail said.

For those with loved ones lost, like al-Dulfi, the victory was bitter-sweet.

“Which Islam is this that prohibits a burial, even during a pandemic? Where is the religion in that?” he said.

Image: Iraqi health ministry workers carry a coffin of a person who died from coronavirus at a new cemetery for the people who died from Covid-19 outside the town of Najaf, Iraq. (AP Photo/Anmar Khalil, File)

‘Complete collapse of economies’ ahead as Africa faces virus