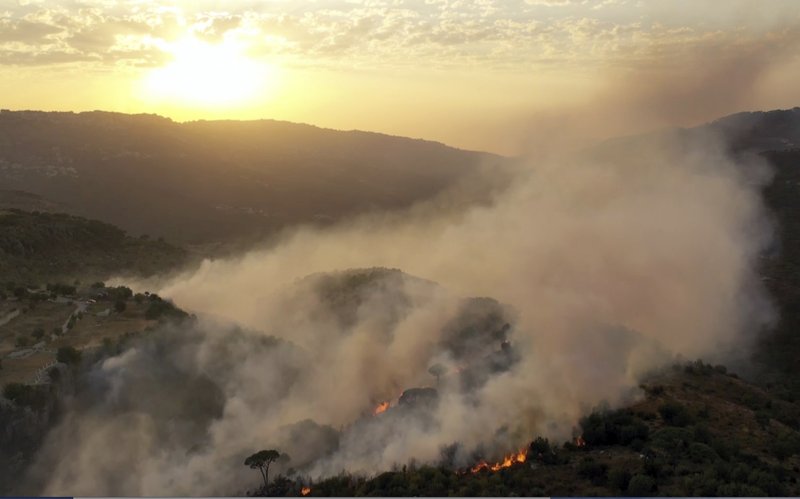 BEIRUT (AP) — Wildfires around the Middle East triggered by a heatwave hitting the region have killed two people, forced thousands of people to leave their homes and detonated landmines along the Lebanon-Israel border, state media and officials said Saturday.

The areas hit by the heatwave are Syria, Lebanon, Israel and the Palestinian territories. The fires come amid an intense heatwave that is unusual for this time of the year.

Wildfires spread across different areas of Israel and the West Bank for a second day Saturday, forced thousands of people to evacuate their homes.

Israeli Police said in a statement firefighters and police forces evacuated 5,000 residents from the city of Nof Hagalil in northern Israel.

One of the hardest hit countries is war-torn Syria where fires have killed two people and left dozens suffering from breathing problems over the past two days. The wildfires also burnt wide areas of forests, mostly in the central province of Homs and the coastal province of Latakia.

With fire fighters overwhelmed, some residents helped them using primitive methods such as carrying water in buckets and pouring them on the fire.

Director of the Forestry Department in Latakia Agricultural Department, Bassem Douba, was quoted as saying by state news agency, SANA, that the number of fires reached 85 in different sites.

Also in Latakia province, fires in President Bashar Assad’s hometown of Qardaha heavily damaged a building used as a storage for the state-owned tobacco company, part of which collapsed.

In Lebanon, firefighters backed by army helicopters fought fires in the country’s north, center and south. A big fire in the southern village of Bater burnt hundreds of pine trees and was getting close to homes when it was put under control.

Along the border with Israel, fires were reported by Lebanon’s state news agency in several villages, some of them triggering explosions of land mines placed along the heavily-guarded front.

Image; In this frame grab from video, flames rise at the scene of forest fire in Ras el-Harf village, in the Baabda district, Lebanon, Friday, Oct. 9, 2020. Wildfires around the Middle East triggered by a heatwave hitting the region have killed two people, forced thousands of people to leave their homes and detonated landmines along the Lebanon-Israel border, state media and officials said Saturday. (AP Photo)

Leaders to UN: If virus doesn’t kill us, climate change will