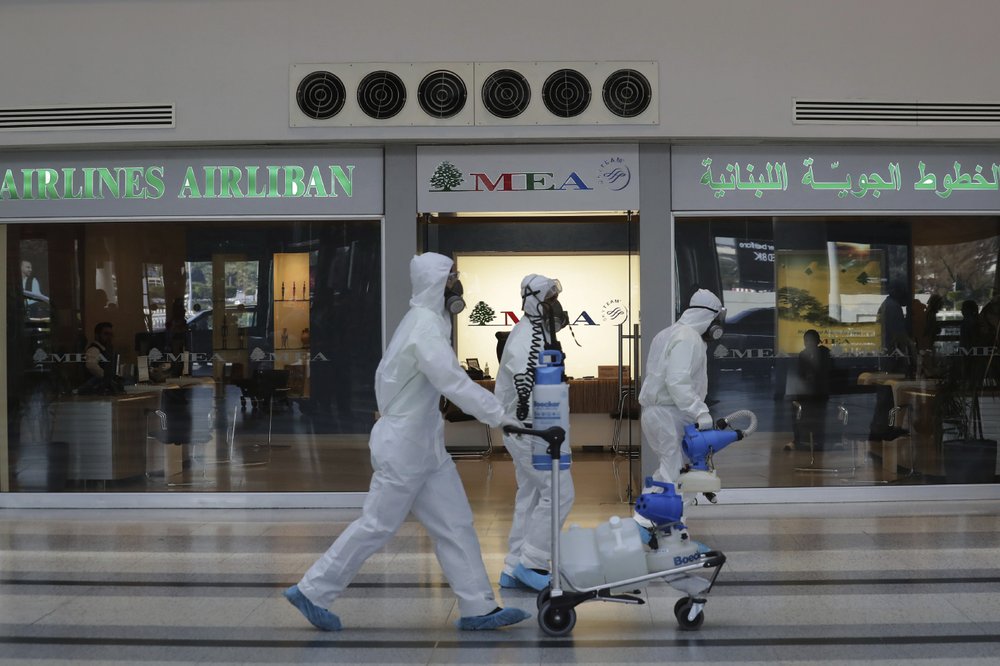 DUBAI, United Arab Emirates (AP) — Seven Middle Eastern countries have suspended all commercial flights due to the fast-spreading coronavirus as the aviation industry’s largest trade association announced Thursday that airlines in the region have already lost more than $7 billion in revenue.

The International Air Transport Association, which represents around 290 airlines worldwide, said the travel restrictions that countries have imposed to slow down the spread of the virus “have more far-reaching implications than anything we have seen before.”

Since the end of January, 16,000 passenger flights have been cancelled in the Middle East. The financial losses translate into hundreds of thousands of jobs at risk, IATA said.

Already, major carriers like Emirates have urged pilots and cabin crew to take unpaid leave. Reports have emerged that Qatar Airways laid off several hundred employees. The airline did not immediately respond to a request for comment.

Job losses in the Middle East have especially far-reaching consequences to the millions of foreign workers who send remittances back home to families in India, Pakistan, the Philippines and eastern European countries. Gulf states like Qatar and the United Arab Emirates rely heavily on foreigners to work as airport support staff, pilots, cleaners and cabin crew.

“A lot of jobs are at risk, economies of the nations are being impacted and airline business in the Middle East is taking a bit hit,” Muhammad Albakri, IATA’s regional vice president for Africa and the Middle East, said in a phone conference with reporters.

“We are suffering, we are struggling. We are bleeding,” he said in his most urgent appeal yet to governments to step in and urgently help many of these state-owned airlines by cutting taxes and offering direct financial assistance.

Late on Wednesday, the last commercial flights arrived in Egypt and Lebanon before a lockdown took place at midnight. They were the latest two countries in the Middle East to shut down airports and suspend all passenger flights. Saudi Arabia, Iraq, Jordan, Tunisia and Morocco had already imposed bans on flights.

Sudan’s transitional government reopened airports for 48 hours only to allow Sudanese stranded abroad to return home and expats to leave the country.

Other countries have largely limited or halted all flights and border crossings. Some, such as Iraq and Lebanon, have ordered citizens to stay home to contain the virus.

Private businesses, restaurants and government institutions have been ordered shut across many countries in the region, leaving only bakeries, supermarkets and pharmacies open as well as some banks.

Since February, Israeli national carrier El Al has laid off 1,000 employees and put another 5,500 on unpaid vacation, “almost all” of its staff, company spokesman Eitan Atias told the AP. It has reduced its flights from 47 destinations globally to just six: New York, Newark, Paris, London, Toronto and Johannesburg.

Albakri said international bookings are down 40% for Mideast airlines and domestic bookings are also similarly impacted. The loss of $7.2 billion in revenue as of March 11 is in comparison to last year’s revenue at the same time, he said.

In Egypt, the Arab world’s most populous country, some 138,000 jobs are immediately at risk and $1 billion in airline revenue has been lost, according to IATA. In Saudi Arabia, which suspended the year-round Muslim pilgrimage to Mecca, $3 billion have been lost and more than 140,000 people could lose their jobs.

Albarki said airlines at best have two to three months of cash on hand to carry them through.

He said another 163,000 people are at risk of losing their jobs in the United Arab Emirates, home to the region’s biggest carrier Emirates and the world’s busiest airport for international travel in Dubai. The UAE’s airlines have absorbed $2.8 billion in base revenue loss, Albakri said.

The UAE has not shut its airports but has barred the entry of all visitors and even its foreign residents who are currently abroad. The decision, which could last at least two weeks, impacts people whose homes, children, bank accounts and livelihoods are in the country, but who were traveling or outside the country. Only Emirati citizens are allowed to return.

The UAE is unique in that only about 10% of its population, or about 1 million people, are Emirati citizens. The other 90% are foreign residents who fuel its economy and keep the country running. They hold the vast majority of jobs in construction, transportation, hospitality, sales, medicine, education and other key sectors. The UAE also announced it was suspending all new labor permits, including those for drivers and domestic workers, until “further notice.”

The Middle East has some 20,000 cases of the virus, with most in Iran or originating from Iran. The virus has killed more than 1,100 people in Iran.

For most people, the virus causes only mild or moderate symptoms, such as fever and cough. For some, especially older adults and people with existing health problems, it can cause more severe illness, including pneumonia. The vast majority of people recover from the new virus.

Iran announced Thursday that 10,000 prisoners — among them an unknown number of inmates whose cases are political and related to activism or speech — would be granted amnesty under a decree by Supreme Leader Ayatollah Ali Khamenei on the occasion of the new year, called Nowruz.

The country has already released 85,000 prisoners on temporary leave to curb the spread of the virus inside prisons.

Image: In this Thursday, March 5, 2020 file photo, workers wearing protective gear walk in front of the Middle East Airlines office as they spray disinfectant as a precaution against the coronavirus outbreak, in the departure terminal at the Rafik Hariri International Airport, in Beirut, Lebanon, Thursday, March 5, 2020 (AP Photo/Hassan Ammar, File)