Facebook Twitter LinkedIn
For the biggest, highest, fastest and most expensive, the Emirati city remains unrivaled in the world of money-no-object luxury.
Opulence is everywhere.
A McLaren F1 sits casually behind a Ferrari F150 at the stoplight, certain hotels offer guests a 24-carat gold iPad to use during their stay, while gold leaf and marble often seem the only materials interior designers have to work with.
The superlatives are clearest in the extraordinary scale of new developments across the desert city.
Construction is already well underway on projects including the Mall of the World.
The world's biggest at 8 million square feet, it's set to beat the current world's biggest, the Dubai Mall just a few miles down the road.
A theme park and 20,000 hotel rooms are also being developed under the project's retractable roof for the summer months, creating the world's first "temperature controlled city" in the process.
With such growth comes ambitious targets at high stakes: doubling annual international visitors to 20 million in time for the World Expo the city is hosting in 2020.
There's also a quiet but determined move to partly reposition the city in the process, based on a vision where cultural immersion plays just as important a role as breaking records.
Time will tell how visitors embrace this new approach.
For now here are some of the experiences that remind why Dubai has become a byword for glittering excess:
1. A room at the top 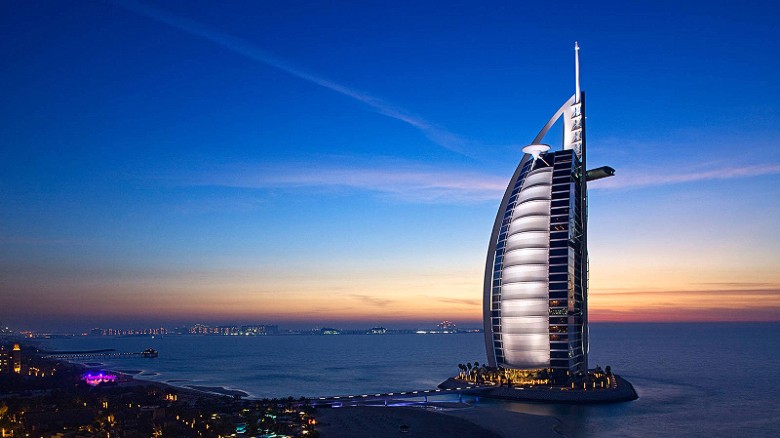 Dubai's most iconic building is still its last word in luxury stays. Its possible to rack up charges of US$50,000 during a night's stay — although far cheaper options are available.
The Burj Al Arab is the building that put Dubai squarely on the global map.
The ultra luxury hotel continues to be the city's unofficial icon. Taller than the Eiffel Tower and designed in the shape of a billowing Arabian dhow sail, the levels of service and ostentation at the Burj remain undimmed in its 16th year.
At US$24,000 per night in peak season, the 780-square-meter Royal Suite spans the entire 25th floor and has a private elevator, cinema and rotating canopy bed with a mirror above it — to make the room feel even more spacious, naturally. 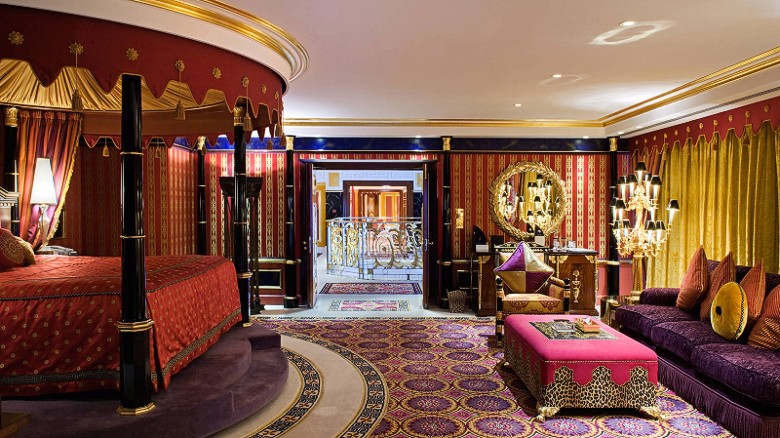 No need to even turn your head in the Burj's Royal Suite. Simply turn the revolving bed in the direction you need to look. It costs about $24,000 during peak season.
Getting to and from the Burj Al Arab by road is hardly slumming it in one of its fleet of white Rolls-Royce Phantoms.
To avoid that pesky traffic there's a helicopter transfer to the building's helipad, $2,700 for a 15-minute hop from the airport before you're deposited 212 meters above sea level. 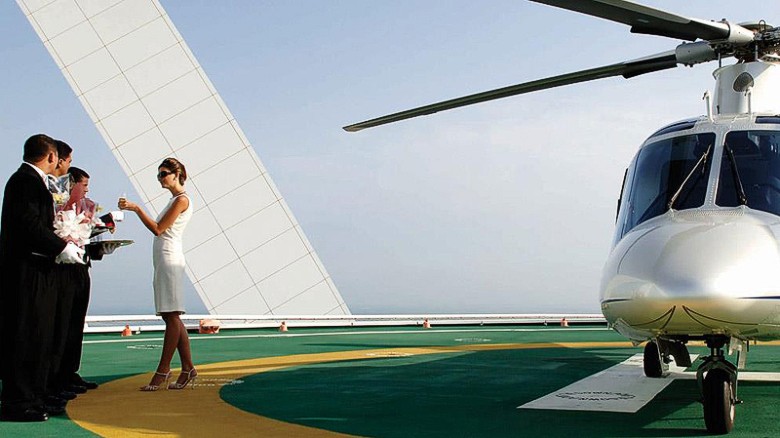 Being chauffeured to the Burj from the airport in one of the hotel's Rolls-Royce Phantoms can be a chore. Alternatively there's a helicopter service for a mere $2,700.
Throw in a bottle of 1982 Chateau Lafite-Rothschild 1er Grand Cru Classe at $24,000 from the extraordinary aquarium-surrounded Al-Mahara restaurant and you're well on the way to a $50,000 overnight. 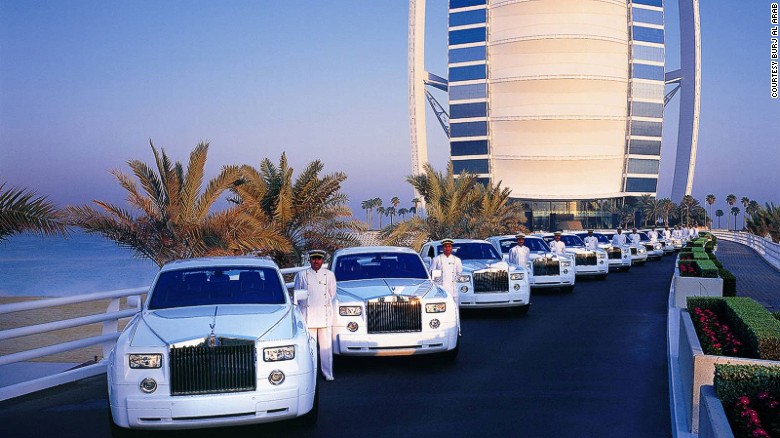 No need to slum it in a chauffer-driven Rolls-Royce. Helicopters are available.
2. Sky views 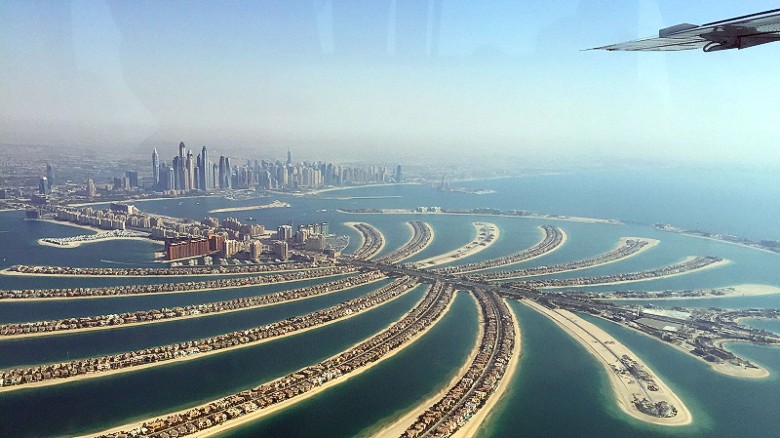 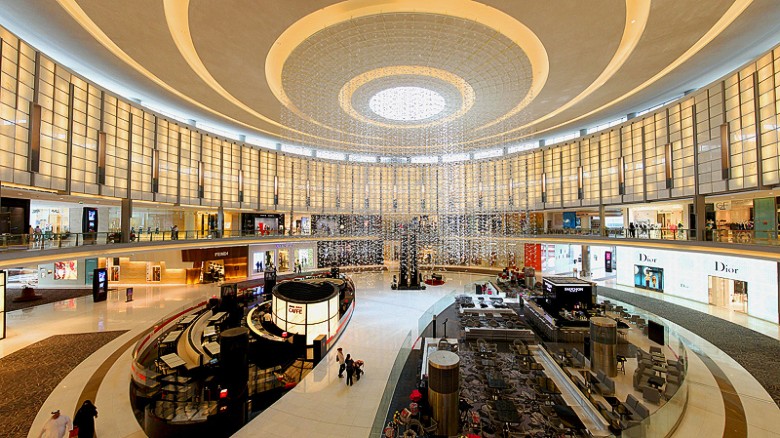 It can be tiring wandering around the world's largest shopping mall. Thankfully VIP buggies are available.
4. Super rich dining 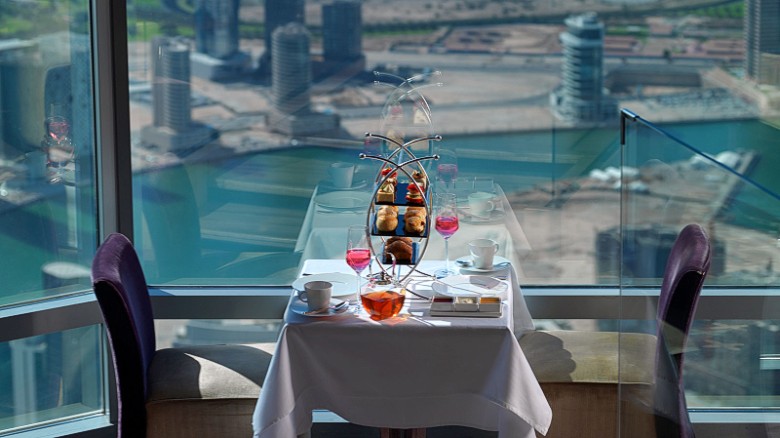 Still the world's tallest building, Burj Khalifa also offers the ultimate in haute cuisine at the At.mosphere restaurant 410 meters above the city.
Dubai is also a global dining destination with few rivals, its restaurant scene up there with the world's best.
Celebrity chefs abound and venues outdo themselves with superlatives.
The city has offered up questionable dining firsts including the $1,000 cupcake and the $800 ice cream sundae.
For the world's highest dinner, At.mosphere in the Burj Khalifa — the world's tallest building — serves a full a la carte menu 410 meters above the city, for lunch or dinner.
Thirty grams of Oscietre Caviar costs a mere $210, but obviously needs to be accompanied by a bottle of Domaine de la Romanee-Conti, La Tache Grand Cru, Cote de Nuit, 2000 at $18,000 a go. 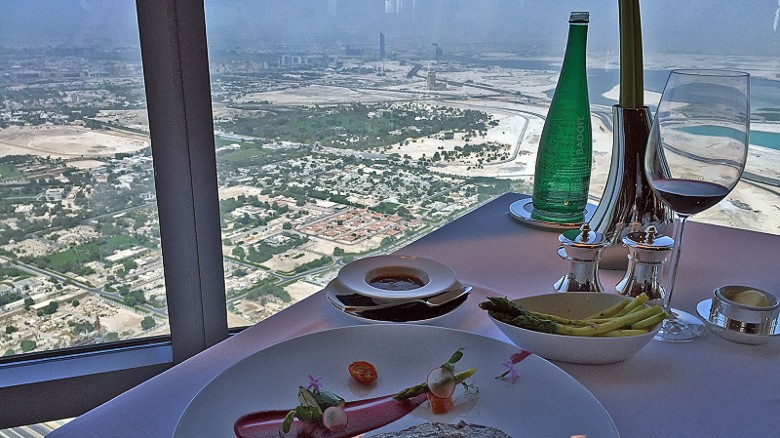 The view, and the food, comes at a price. Thirty grams of Oscietre Caviar costs $210. A bottle of Domaine de la Romanee-Conti, La Tache Grand Cru, Cote de Nuit, 2000 goes for $18,000.
5. A theme park of one's own
Cooling down in the desert city doesn't come much better than Aquaventure, the city's enormous waterpark at the aptly-named Atlantis.
Covering 17 hectares, it's been designed so that you never have to get out of the water as you conquer rides including the 27-meter Leap of Faith — a near vertical drop which shoots you through a shark-infested lagoon.
Best of all, though, wealthy visitors can skip the lines altogether and get serious bragging rights by renting out the entire place for an evening splash.
The tab for that: $40,000 for two hours.
Those who prefer their water frozen can hire Ski Dubai for a cool $135,000 per day, meaning no pesky learners getting in the way on the slopes. 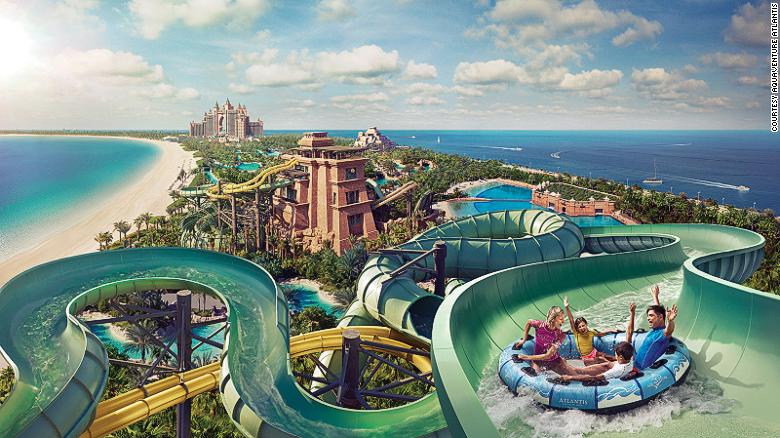 Aquaventure Waterpark: No need to wait in line. 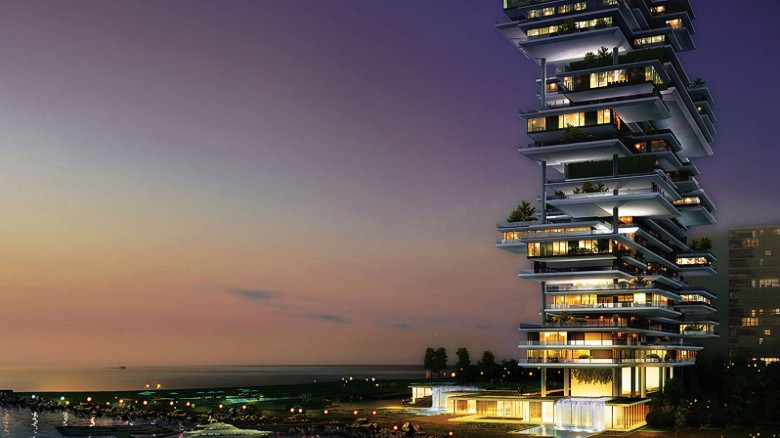 Those who can't bear to tear themselves away from such a lavish lifestyle might want to consider investing in a pied a terre. The city's most expensive apartment was put on the market recently for $49 million.
If you're really going to go all-out, it makes sense to finish your stay by putting a down payment on the city's most expensive apartment, put on the market recently for $49 million.
You won't be able to move in until 2017, but when you do the penthouse pad offers eight bedrooms across 42,477 square feet, an infinity pool and spa, as well as garage space for your 12 favorite cars.
If you fancy catching some air, then 16,641 square feet of balcony space should see you right.
Located at One at Palm Jumeirah, uber-cool Japanese designers Super Potato will look after the interior so all you need to worry about is the monthly mortgage repayments.
Or, if you're staying here, probably not.
Tags
Burj Khalifa dubai Dubai mall Palm Jumeirah