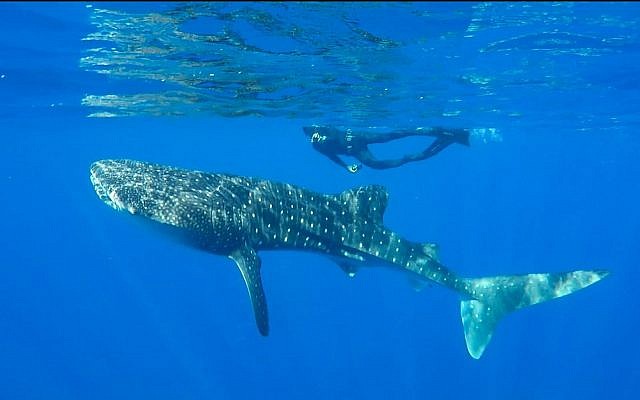 Egyptian maritime activists on Monday observed and photographed a slow-moving whale shark in the Red Sea off the coast of Hurghada, according to a statement released by the Red Sea Governorate’s Marine Rescue and Environmental Protection Society.

Activists were careful not to disturb or touch the shark while capturing the photo, the statement added.

Environmental researcher Ahmed Ghallab said the whale shark is a peaceful, filter-feeding carpet shark, and is in danger of extinction.

This particular whale shark has become a familiar feature in the Red Sea, having found its way there and then chosen to stay after finding abundant plankton — its main food — in the sea’s waters.

In 2018, the whale shark appeared several times in three different parts of the Red Sea, including Port Ghalleb, al-Fanous, and between the two islands of Giftun, according to Red Sea Reserves manager Ahmed Ghallab.

This shark likely entered the sea from the Indian Ocean through Bab el-Mandab to the Red Sea, according to Ghallab.

Marine biologists consider the appearance of the animal a rare event, one that demonstrates the success of efforts to protect the Red Sea’s environment, as well as Egypt’s commitment to international agreements in this regard, which led the whale shark to settle in the Red Sea.

The whale shark owes its name to its gargantuan size, with the largest adults reaching up to 13 meters in length, making them among the largest species of fish. As they primarily feed on plankton, they pose no danger to humans.

Hunting whale sharks is banned in Egypt, since the species is endangered. Concerted efforts have been made to preserve the Red Sea ecosystem, which is the habitat of several other rare and endangered species.