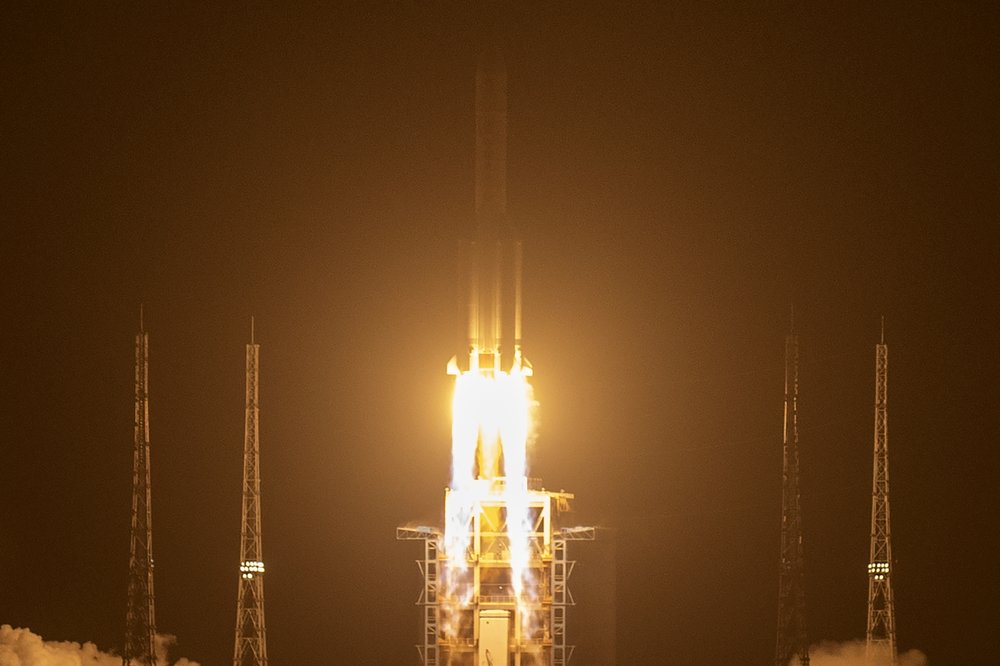 WENCHANG, China (AP) — China’s latest trip to the moon is another milestone in the Asian powerhouse’s slow but steady ascent to the stars.

China became the third country to put a person into orbit a generation ago and the first to land on the far side of the moon in 2019. Future ambitions include a permanent space station and putting people back on the moon more than 50 years after the US did.

But even before the latest lunar mission lifted off before dawn Tuesday, a top program official maintained that China isn’t competing with anyone.

“China will set its development goals in the space industry based on its own considerations of science and engineering technology,” Pei Zhaoyu, deputy director of the Lunar Exploration and Space Engineering Center at the China National Space Administration, told reporters hours before the Chang’e 5 mission was launched.

“We do not place rivals (before us) when setting those goals,” Pei said.

Whether that is true or not is debatable. China has a national plan to seize global leadership in key technologies and the space program has been a major component of that. It also is a source of national pride to lift the reputation of the ruling Communist Party.

What’s clear is that China’s cautious, incremental approach has racked up success after success since it first put a person in space in 2003, joining the former Soviet Union and the United States. That has been followed by more crewed missions, the launch of a space lab, the placing of a rover on the moon’s relatively unexplored far side and, this year, an operation to land on Mars.

The Chang’e 5 mission, if successful, would be the first time moon rocks and debris are brought to Earth since a 1976 Soviet mission. The four modules of the spacecraft blasted off atop a massive Long March-5Y rocket from the Wenchang launch center on Hainan island.

The mission’s main task is to drill 2 meters (about 7 feet) into the moon’s surface and scoop up about two kilograms (4.4 pounds) of rocks and other debris. The lander will deposit them in an ascender. A return capsule will deliver them back to Earth, landing on the grasslands of the Inner Mongolia region in mid-December.

“Pulling off the Chang’e 5 mission would be an impressive feat for any nation,” said Florida-based expert Stephen Clark of the publication Spaceflight Now.

China prides itself on arriving at this point largely through its own efforts, although Russia helped early on with astronaut training and China’s crewed Shenzhou space capsule is based on Russia’s Soyuz.

While there has been collaboration with some other nations, notably those belonging to the European Space Agency, which has provided tracking support for Chinese missions, the United States isn’t one of them.

US law requires Congressional approval for cooperation between NASA and China’s military-linked program. Ongoing political and economic disputes, notably accusations that China steals or compels the transfer of sensitive trade secrets, appear to dim the prospects for closer ties.

China’s space program has at times been seen as recreating achievements attained years ago by others, primarily the US and the former Soviet Union. Even China’s permanent space station, now under construction, is partly a response to its exclusion from the International Space Station, mainly at the insistence of the US

Other countries are also forging ahead, underscored by the dramatic landing of America’s Curiosity Mars rover in 2012 and the return to Earth next month of Japan’s explorer Hayabusa2 with samples collected from the asteroid Ryugu.

Lunar exploration remains a priority for China, something that in the future will likely take the form of “a human-machine combination,” Pei told reporters.

No target date for a crewed moon mission has been announced, but Pei said a goal down the line is to build an international lunar research station that can provide long-term support for scientific exploration activities on the lunar surface.

“We will determine when to implement a manned lunar landing based on scientific needs and technical and economic conditions,” he said.

Image: A Long March-5 rocket carrying the Chang’e 5 lunar mission lifts off at the Wenchang Space Launch Center in Wenchang in southern China’s Hainan Province, early Tuesday, Nov. 24, 2020. China launched an ambitious mission on Tuesday to bring back material from the moon’s surface for the first time in more than 40 years — an undertaking that could boost human understanding of the moon and of the solar system more generally. (AP Photo/Mark Schiefelbein)

China prepping for mission to bring back material from moon