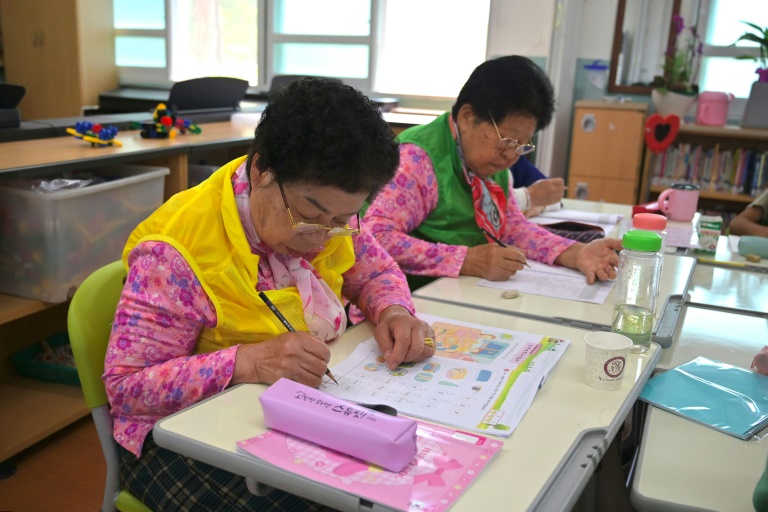 When the tune of “Twinkle twinkle little star” plays in her South Korean classroom octogenarian pupil Nam Yang-soon sings along with classmates more than 70 years her junior.

With South Korea’s population ageing rapidly and families migrating from the countryside to the cities for decades, rural primary schools are facing falling pupil numbers.

Now some are targeting the opposite end of the age spectrum and recruiting elderly illiterate grandmothers — who were denied education on gender grounds during their own childhoods — to stave off the threat of closure and teach them to read and write.

“I have often felt like others looked down on me because of my illiteracy,” Nam, who at 84 is the oldest of three grandmothers in second grade at Woldeung Elementary School, told AFP.

Her favorite subject is mathematics. “It is so much fun adding and subtracting numbers,” she chuckled, adding: “I want to be in school as long as my health allows me.”

Korea has been a patriarchal society for centuries, with a long-ingrained preference for sons over daughters — obstetricians in the South are still banned from telling parents the sex of a foetus.

Even as late as the 1960s, some South Korean girls did not to go to school, especially in the countryside.

“My grandfather insisted girls like me had no use for education, said Park Young-ae, 70, one of Nam’s classmates at the school in Suncheon, in the southeast corner of the country.

“I always regretted I couldn’t set foot in school as a young girl,” she said.

Now she is enjoying the “best moments” of her life with four young classmates, she added, whether its taking spelling tests or singing songs together.

Eight-year-old fellow pupil Kim Seung-hyun addresses his ageing friends with the honorific terms that Korean requires for elders, but hopes they will continue all the way through sixth grade, when primary school finishes in the South, and on to middle school with him.

“I think I would be sad if they stopped coming to school,” he said.

Each morning the women walk between the fields of South Jeolla province, a rural backwater that is the South’s ricebasket, to the school 320 kilometres (200 miles) from Seoul.

As the South industrialised in the decades following the Korean War vast numbers of people moved from the countryside to the growing cities in search of employment, prosperity, and a piece of the Miracle on the Han, as the country’s rise to become the world’s 11th-largest economy is known.

The trend continues to this day — the number of people in farming families fell by nearly 70 percent in the 30 years to 2018, figures from Statistics Korea show.

At the same time South Korea is facing a demographic crisis with young people choosing not to reproduce in an ultra-competitive society with a stagnant job market.

AFP / Jung Yeon-jeFaced with falling pupil numbers, some rural schools are recruiting elderly illiterate grandmothers to teach them to read and write and stave off the threat of closure

The fertility rate — the number of children a woman will have in her lifetime — dropped to less than one last year, one of the lowest figures in the world, down from 4.53 in 1970.

Currently 51 million, the population is projected to fall to 39 million in 2067, when the median age will be 62.

“South Korea is experiencing an ageing process at an unprecedented pace,” said Cho Sung-ho of the Korea Institute for Health and Social Affairs, adding it was “struggling to adapt to the declining trend”.

Woldeung Elementary School typifies the phenomenon. At its peak in 1968, it had 1,200 pupils. Now just 29 children attend.

Last year it faced having to combine its first- and second- year classes because of the lack of numbers, so offered places to local residents who had not previously gone to school.

The grandmothers’ much younger teacher Choi Young-sun, 43, says she was “very nervous” about their presence at first, but they have proved a positive influence.

“I have observed my students behave in a much more mature and respectful manner than other children of their age,” she said.

At least three other schools in South Jeolla are known to have recruited grandmothers, but a provincial official declined to say how many had done so altogether, or how many grandmothers had enrolled.

“We have withheld the information because we think it is sensitive,” she said, “especially as we don’t have countermeasures to the falling number of students in rural areas”.