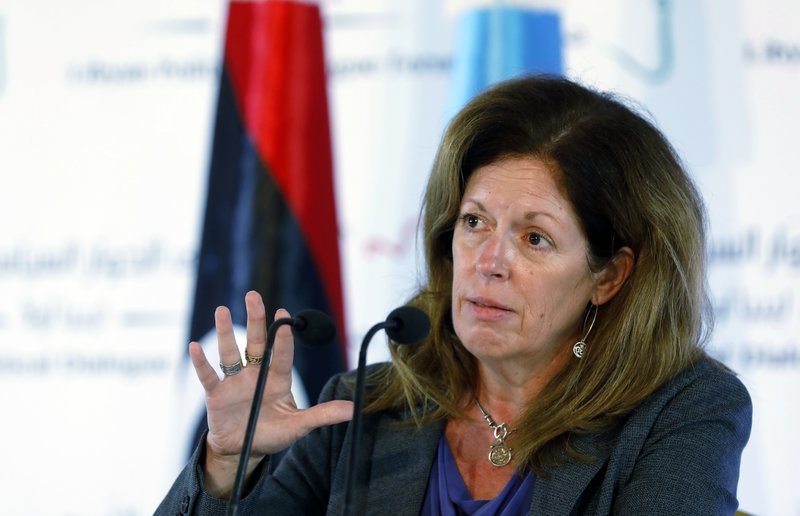 GENEVA (AP) — Delegates from Libya’s opposing sides kicked off a five-day meeting on Monday to choose an interim prime minister and a three-person presidency council in a bid to reunite the troubled oil-rich country before an election in December.

The Libyan Political Dialogue Forum, including envoys from around Libya, was meeting under UN mediation in an undisclosed site outside Geneva in hopes of stabilizing the North African country that has been largely lawless since Moammar Gadhafi’s fall and killing in 2011.

The voting process is taking place under the mediation of the UN secretary-general’s acting special representative for Libya, Stephanie Williams. The interim authority to be chosen will seek to rebuild state institutions and lead Libya to a national election on Dec. 24. A list of possible candidates has already been agreed upon.

“Reaching this far and achieving this progress in the political dialogue has been an arduous journey fraught with challenges,” Williams told the gathering Monday. “Indeed, a year ago, this would not have been possible.”

The warring factions also agreed that a national referendum would be held on constitutional arrangements, laying the legal groundwork for the December vote.

Since Gadhafi’s ouster, Libya has been in turmoil and split between rival administrations in the east and west — each backed by an array of militias and foreign powers.

The 75-member forum represents the three main regions of old Libya: Tripolitania in the west, Cyrenaica in the east, and Fezzan in the southwest — each to be represented on the three-member presidential council. The prime minister is to be chosen by the candidate winning 70% of votes.

Twenty-four candidates are running for the presidential council posts. Those include Aguila Saleh, speaker of the east-based House of Representatives, Khaled al-Meshri, the head of the Tripoli-based government’s Supreme Council of State.

Libya’s top judge Mohammed al-Hafi’s candidacy for the presidential council has stirred up controversy. The country’s Judges’ Association decried the move, saying he should have retired before running,

Twenty-one candidates are running for prime minister, including Fathi Bashaga, the powerful interior minister in Tripoli, and Ahmed Meitig, deputy prime minister of the UN-supported government.

Bashaga, a front-runner, said the transitional government should be a national unity one that brings all Libyans together without discrimination.

“We are one kilometer (mile) away from a successful ending of a long hectic process. Failure is definitely not an option,” he tweeted Sunday.

Given the sheer number of candidates and the high bar needed to declare a winner, the UN mission is likely to resort to lists formed from Libya’s three regions, with each list consisting of four names, nominated for the presidential council and a prime minister position.

This is likely to lead to candidates working together to form a most-likely-to-win list, said Jalel Harchaoui, a research fellow specializing in Libyan affairs at the Clingendael Netherlands Institute of International Relations. He said foreign countries, like Russia, Turkey and the United Arab Emirates, are likely exerting their sway on the choices too.

“In fact, we don’t even know whether a cabinet can be formed at all, even assuming the four positions are filled thanks to the UN process. The Defense Ministry, for instance, will be one very tricky post, obviously, as Turkey is hell-bent on controlling it,” he said.

Last week, the United States called on Russia, Turkey and the United Arab Emirates to halt their military interventions in Libya, as has been sought under the cease-fire agreement that has largely held in recent months.

The cease-fire deal, inked in October, included having foreign forces and mercenaries leave Libya within three months but so far no progress has been made on that.

Williams said in December there were at least 20,000 foreign fighters and mercenaries in Libya, and warned about a “serious crisis” as weapons continue to pour into the country.

Turkey is the main patron of the UN-supported government in Tripoli, the capital, while Egypt, Russia and UAE back the forces of military commander Khalifa Hifter — who runs most of the east and south.

UN Secretary-General Antonio Guterres has said Libyans are making a “remarkable effort to come together” and said it’s crucial for foreign forces to withdraw.

By JAMEY KEATEN and SAMY MAGDY

Image: FILE – In this file photo dated Sunday, Nov. 15, 2020, Stephanie Williams, Acting Special Representative of the Secretary-General and Head of the United Nations Support Mission speaks during a news conference in Tunis, Tunisia. Delegates from Libya’s opposing sides kick off a five-day meeting on Monday Feb. 1, 2021, to choose an interim prime minister before an election in December 2021, with the voting process taking place under the mediation of the UN secretary-general’s acting special representative for Libya, Stephanie Williams.(AP Photo/Walid Haddad, FILE)

Tunisia president to launch dialogue to 'correct the revolution' process