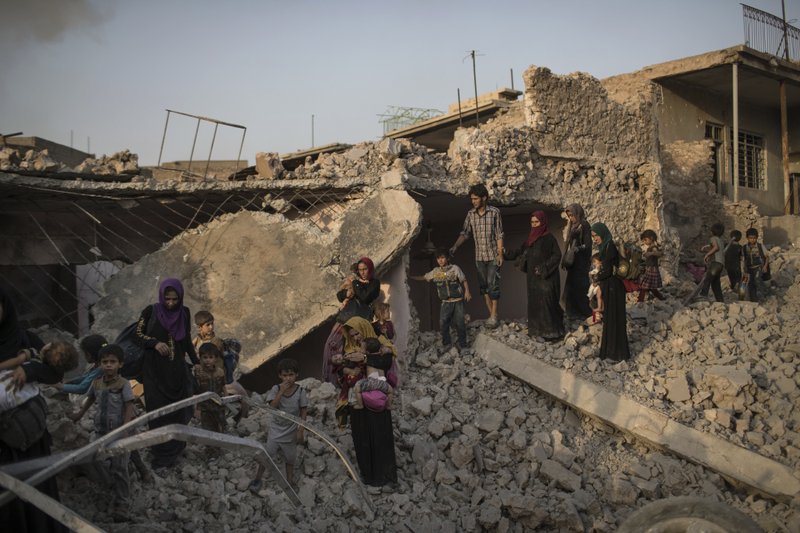 There was a smell of death in Mosul’s Old City when Ayman Hashem came back this week to see what happened to his home. His neighborhood was unrecognizable.

“All that’s left is rubble and the bodies of families trapped underneath,” the 23-year-old said. He flipped through photos on his phone, showing picture after picture of wreckage. His own house was “cut in half,” he said. He had to cover his nose with his tee-shirt because of the smell of buried, rotting bodies.

Iraq’s US-backed forces wrested Mosul from the Islamic State group at the cost of enormous destruction. The nearly 9-month fight culminated with a crescendo of devastation — the blasting of the historic Old City to root out the deeply dug-in militants.

Nearly a third of the Old City — more than 5,000 buildings — was damaged or destroyed in the final three weeks of bombardment up to July 8, according to a survey by U.N. Habitat using satellite imagery. Across the city, 10,000 buildings were damaged over the course of the war, the large majority in western Mosul, the scene of the most intense artillery, airstrikes and fighting during the past five months. The survey only covers damage visible in satellite photos, meaning the real number is likely higher.

The population, once numbering 3 million, is battered and exhausted, with hundreds of thousands displaced. Without a swift campaign to rebuild Mosul, aid and rights groups warn the current humanitarian crisis will balloon and resentment will likely give way to extremism, undermining the victory.

“If the western half is ignored it will produce a social disaster and this social disaster will create bigger destruction if it’s not addressed,” said Khatab Mohammed al-Najjar, a resident of eastern Mosul who watched the Old City burn from across the Tigris River during the operation.

“West Mosul produced Daesh, and it is very possible it may produce a new Daesh,” he said, referring to west Mosul’s historically more religious and traditional residents. He used the Arabic acronym for IS.

When Iraqi Prime Minister Haider al-Abadi declared victory in Mosul Monday, he pledged reconstruction would begin soon. But his government still struggles to finance day-to-day workings of the state amid low oil prices.

Thousands of Mosul families have been left without a home. Schools have been leveled, utility grids wrecked, highways pounded into broken dirt roads.

All five of the city’s bridges spanning the Tigris River have been damaged. The main hospital complex where a battle raged for more than a month is a burned out shell. Mosul’s airport looks like a derelict parking lot, booby-trapped with explosives by fleeing IS fighters.

In eastern Mosul, the destruction was less intense. More than 160,000 of the 176,000 people who fled the east have returned, according to the U.N. Residents have begun rebuilding homes, shops have reopened, and demining is underway.

But west of the Tigris, neighborhoods have been rendered into ghost towns. There, coalition strikes killed some 5,805 civilians between Feb. 19 and June 19, according to Airwars, a London-based monitoring group tracking civilian deaths resulting from coalition actions.

Fewer than a tenth of the more than 730,000 people who fled western Mosul have filtered back.

Saif Mohammed recently re-opened his sandwich shop on a main avenue in the west, repairing war damage with the help of a $5,000 loan from relatives. On the same street, only two or three other shops are open. The other storefronts are bombed out and burned, the corrugated Iron doors warped by explosions.

His shop is a bet that residents will return. “But what people really need is government help,” he said. “If the government doesn’t give money, there won’t be any rebuilding.”

Hiyam Mohammed hid in her home with her family on the edge of the Old City throughout the fight. They could see the cemetery from their house.

“Some days the funerals lasted from dawn into the night. There were so many bodies piled up, it looked like a hill,” she said. “I thought I was going crazy seeing this. They didn’t even have time to wash the dead.”

She said the only way to justice is if the government and coalition pay compensation to those who lost relatives or property.

“The government brought Daesh to us,” she said, referring to sectarian rule that fueled Sunni extremism and corruption that weakened the country’s security forces. “This mess is God’s revenge for that.”

But some in the security forces have resentments of their own, blaming Mosul residents for supporting IS.

“The people here have always had a rebellious nature, so they should take some responsibility for what has happened,” said Maj. Imad Hassan, a federal police officer from Baghdad.

During the campaign, his unit fought to capture a stretch of the corniche running along the Tigris, hammering it with artillery for weeks to clear out IS resistance. The former municipal center was shredded, rows of buildings blackened, palm trees lining the boulevard burned.

“I hope this destruction teaches them their lesson,” he said.

Iraqi and coalition officials say the devastation was the result of the Islamic State group’s tenacious grip. IS transformed the city into a fortress. Its fighters used hospitals and schools as military bases, moved civilians from the rural outskirts into central neighborhoods to use as shields from airstrikes and rigged hundreds of houses and roads with explosives.

Nearly 10 years ago, Maj. Maher Aziz Khalaf fought IS’ predecessor, al-Qaida, in Mosul alongside U.S. forces. But when he rolled into western Mosul with the first wave of Iraqi special forces troops in early February he said he immediately realized this battle would alter the city in a way previous fights hadn’t.

“In 2008 it was different. We would just identify which houses the terrorists were living in, come in at night and arrest them,” he said. “We were fighting gangs, not an entire city.”

A coalition spokesman, Col. Joe Scrocca, said the forces had to balance between protecting non-combatants and infrastructure on one hand and moving quickly on the other. Another factor, he said, was that the longer it took to free the city, the more danger civilians were in, whether from lack of food or IS retaliation.

Hesitant to risk casualties along their own troops, Iraqi military commanders relied on airpower and artillery to clear neighborhoods where a handful of IS fighters armed with light weapons and civilians as human shields repeatedly stalled entire units of Iraq’s military.

As the fight moved to the Old City, rights groups and the U.N. warned the coalition and Iraqi forces against using large munitions. Still, the US-led coalition repeatedly approved the use of 500- and 2,000-pound bombs inside the densely populated district.

As waves of civilians fled the Old City, more than a dozen individuals told the AP they knew of multiple families killed under their homes by what they believed to be airstrikes.

“The buildings can be rebuilt, but the human lives lost cannot,” said Iraqi special forces Lt. Gen. Abdul-Ghani al-Asadi from a base on the edge of Old City on Tuesday.

“But the buildings in the Old City were all very old anyway,” he said. “Now we can demolish them and build apartment buildings.”