Crises-hit Lebanon has started this year with a tough first week.

This Tuesday, the exchange rate hit another all-time low with 30,000 Lebanese pounds worth just $1 on the black market. Officially, the pound is pegged to the dollar, but the fixed rate has effectively become meaningless in the country’s protracted economic crisis.

Meanwhile, a heated spat between Hezbollah’s Secretary-General Hassan Nasrallah and Saudi King Salman has once more ignited diplomatic tensions between Lebanon and its ally, Saudi Arabia.

On Monday, Nasrallah called King Salman a terrorist in a televised speech marking the occasion of the second anniversary of the assassination of the Iranian commander Qassem Soleimani.

Prior to this, King Salman had called on the Lebanese to “to end the terrorist Hezbollah control” of Lebanon.

Lebanon’s Prime Minister Najib Mikati was quick to issue a statement, which not only sought to limit the diplomatic damage but also showed the growing impatience with the Iran-backed militia and political heavyweight Hezbollah.

“Nasrallah’s comments do neither represent the Lebanese government nor the majority of Lebanese,” Mikati said.

He added that “while we call for Hezbollah to be part of Lebanon’s diverse affiliation, its leadership is in opposition to this trend with positions that first harm the Lebanese and secondly Lebanon’s relations with its brother. For God’s sake, have mercy on Lebanon and the Lebanese, and stop the hateful sectarian and political rhetoric.”

Mikati is not the only one who has started to increase pressure on the powerful Shiite Hezbollah. President Aoun has also become more open in his discomfort.

Last week, he criticized Hezbollah for harming relations with Gulf countries by “interfering in matters that do not concern us,” referring to Saudi Arabia and Hezbollah being on opposite sides in the war in Yemen — a constant bone of contention between the two sides.

Aoun’s warning is all the more significant as his Maronite Christian Party, the Free Patriotic Movement (FPM), is part of the “March 8 Alliance” with Hezbollah.

Furthermore, the Lebanese are increasingly worried about Hezbollah’s rhetoric regarding the Gulf states.

“Hezbollah is causing trouble for our children living in the Gulf,” Amal Mounla, a 62-year-old local in Beirut, told DW. “Why do they constantly criticize the Gulf? When hundreds of thousands of Lebanese generate money from these countries to help us here?” For her, it’s obvious that Hezbollah has started losing ground in Lebanon.

Tip of the Iranian spear

The Iran-backed militia, which is categorized as a terrorist group in the United States, the European Union and other countries, is deeply rooted in Lebanese society.

Formed in 1982 by Iran’s Revolutionary Guards, it maintains the strongest military power in Lebanon, runs its own schools, hospitals and charity networks, and forms, together with allies such as the Amal Movement, the dominant political Shiite faction in the parliament.

Lebanon: From riches to ruin

“Given the economic and financial free fall in Lebanon, political alliances are under pressure, and everyone is losing ground. However, this is not the metric. The question is if Hezbollah is losing ground more than others? I would say no,” Mohanad Hage Ali, director of communications and a fellow at the Malcolm H. Kerr Carnegie Middle East Center, told DW by phone.

Yet, despite holding a strong position both militarily and politically, Hezbollah will soon have to face two sensitive topics that might heavily impact the group.

On the one hand, Lebanese general elections are coming up, scheduled for May 15.

“Hezbollah’s main ally, FPM, is now seeking to gain more from their alliance, specifically as the presidential elections near. Hezbollah is not yet willing to commit to electing Gebran Bassil, the FPM leader and the president’s heir apparent,” said Hage Ali.

He is convinced that Hezbollah’s alliance with FPM “won’t survive this pivotal year, without an agreement on the next president.” 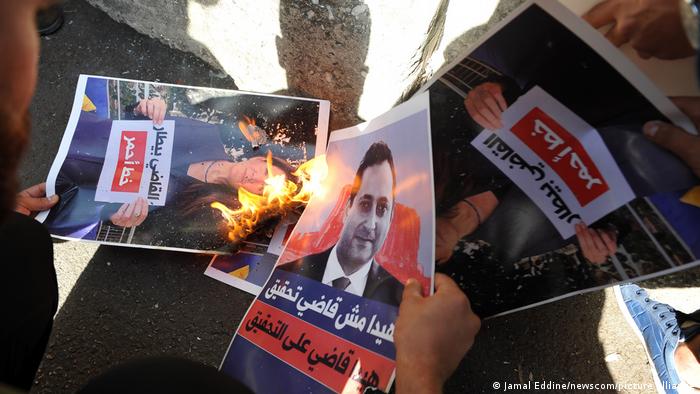 Hezbollah is trying to muzzle Judge Tarek Bitar, who is investigating the Beirut port blast

On the other hand, the investigation into the devastating port blast in August 2020 is also potentially spelling trouble for the group.

“Hezbollah has been blocking the government meetings to secure a deal on containing the work of judge Bitar, who leads the investigation into the Beirut port blast,” said Hage Ali.

Tarek Bitar is heading the investigation against leading politicians, including Ali Hassan Khalil, a former finance minister and an ally of Hezbollah.

In turn, Hezbollah and their allies have prevented the Cabinet from meeting since October 12.

However, this situation has led to a double Catch-22: Without the Cabinet, no decision can be made to tackle the multiple crises, which are described by the World Bank as one of the most severe financial meltdowns in world history.

Additionally, the International Monetary Fund has set conditions for allocating money to the ailing Lebanese economy, with one of them being the 2022 budget — which needs to be agreed on by parliament and approved by the Cabinet.

In turn, for Prime Minister Mikati a lot is at stake, and increasing pressure on Hezbollah obviously seems the easier road to travel.

“I think that [the Cabinet’s] agenda and the presence of the budget makes it more than necessary for the Cabinet to meet, and I don’t think anyone will fall short on their national [duties],” Mikati said.

However, he hasn’t yet specified any consequences if Hezbollah-backed ministers and their allies fail to attend.

So far, he has announced a time frame of no more than a few days. “We will convene the Cabinet as soon as it receives the [2022] budget,” Mikati said following a meeting with President Aoun.

Meanwhile, it seems Riyadh is not stepping up its rhetoric against Lebanon, but rather pointing out that it doesn’t take Hezbollah’s Nasrallah too seriously. On Thursday, the Saudi ambassador to Lebanon, Waleed Bukhari, affirmed that “the kingdom’s relations with Lebanon are too deep to be affected with irresponsible and absurd statements.”