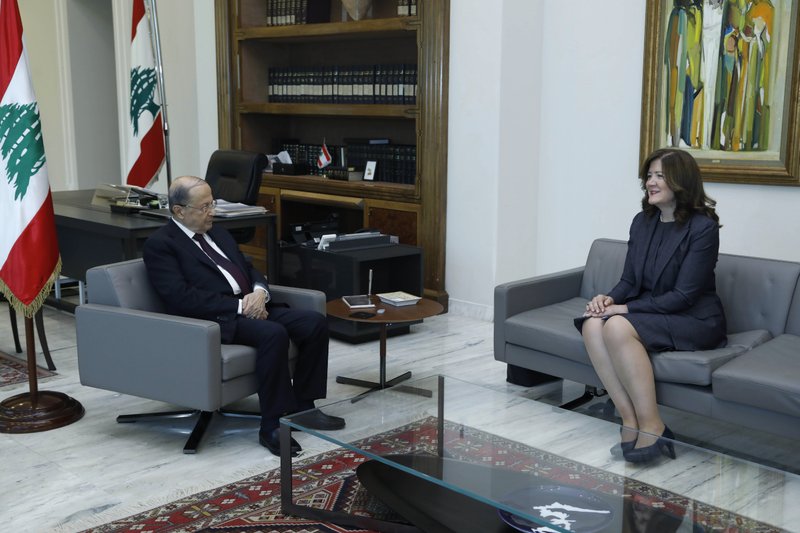 BEIRUT (AP) — Lebanon’s foreign minister summoned the US ambassador to Beirut over comments she made recently in which she criticized the militant Hezbollah group, state-run National News Agency reported Sunday.

The agency gave no further details other than saying that the meeting between Foreign Minister Nassif Hitti and Ambassador Dorothy Shea is scheduled for Monday afternoon.

Local media said the minister will tell the ambassador that according to the Vienna Convention on the Law of Treaties, an ambassador has no right to interfere in the internal affairs of another country and should not incite the Lebanese people against one another.

On Saturday, a Lebanese judge banned local and foreign media outlets in the country from interviewing the US ambassador for a year saying that her criticism of Hezbollah was seditious and a threat to social peace.

The judge’s ruling came a day after Shea told Saudi-owned TV station Al-Hadath that Washington has “great concerns” over Hezbollah’s role in the government.

The move was harshly criticized by many in Lebanon, which enjoyed one of the more freer media landscapes in the Arab world. Others, however, criticized Shea for comments deemed an interference in Lebanon’s internal affairs

Since the ban by the judge was imposed on Saturday, several local TV stations aired fresh comments from Shea in which she described the judge’s decision as “unfortunate.” She added that a senior Lebanese government official, whom she did not name, apologized to her.

“I was contacted yesterday afternoon by a very high-ranking and a well-placed official in the Lebanese government and this official expressed apologies, conveyed that this ruling did not have proper standing,” Shea told the local MTV station on Sunday. Shea added that the official told her that the government “will take the necessary step to reverse it.”

The court decision reflected the rising tension between the US and Hezbollah. It also revealed a widening rift among groups in Lebanon, which is facing the worst economic crisis in its modern history.

Hezbollah legislator Hassan Fadlallah on Sunday called Shea’s comments “a flagrant aggression on the sovereignty of our country and its national dignity.” He called on the foreign ministry to force the ambassador to “respect international law.”

Lebanon is gripped by a deepening financial crisis and talks with the International Monetary Fund for assistance has been complicated by political infighting.

Shea said Lebanon is reeling from years of corruption of successive governments and accused Hezbollah of siphoning off government funds for its own purposes and of obstructing needed economic reforms.

Hezbollah, the Iran-backed Shiite group, and its allies are dominant in parliament and back the current government. It is designated by Washington as a terrorist group and the US has continued to expand sanctions against the group.

However, Washington is one of the largest donors to the Lebanese army, making for one of the more complicated diplomatic balancing acts in the region.

Image: In this photo released on Thursday, June 11, 2020 by the Lebanese Government, President Michel Aoun, left, meets with US Ambassador to Lebanon Dorothy Shea, at the Presidential Palace in Baabda, east of Beirut, Lebanon. A Lebanese court issued a ruling Saturday barring local and foreign media in the country from interviewing the US ambassador to Beirut for a year, calling a recent interview in which she criticized the powerful Hezbollah group seditious and a threat to social peace. (Dalati Nohra/Lebanese Government via AP)