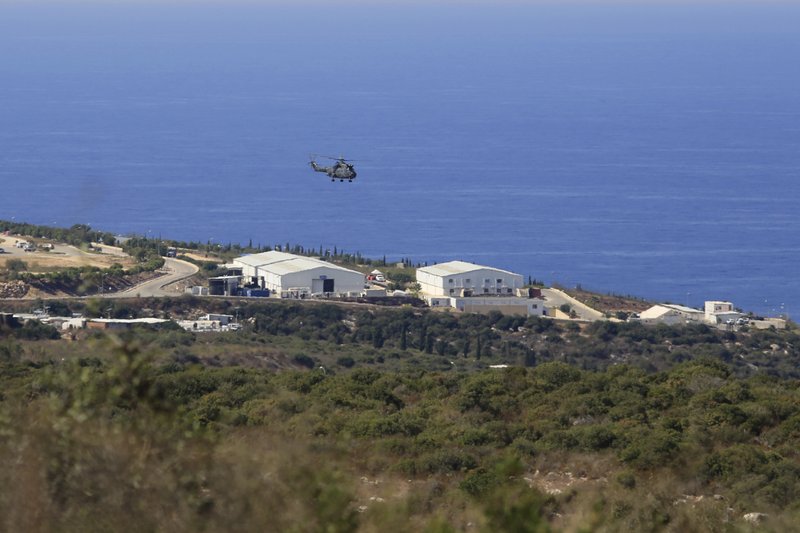 BEIRUT (AP) — Lebanon and Israel held a second round of US-mediated talks Wednesday over their disputed maritime border and agreed to continue discussions on the next day.

Local news reports described the meeting as “serious” as the two sides got down to technicalities and the Lebanese delegation pushed for an additional 1,430 square kilometers (550 square miles) to be included in Lebanese territory.

The US has been mediating the issue for about a decade, but only earlier this month was a breakthrough reached on an agreement for a framework for US-mediated talks.

Beirut hopes that oil and gas discoveries in its territorial waters will help it overcome an unprecedented economic and financial crisis and pay back its massive debt that stands at 170% of GDP, making it one of the highest in the world. The talks also come to the backdrop of US sanctions that recently included two influential former Cabinet ministers allied with the militant Hezbollah group. Israel, the United States and some other Western and Arab countries consider the Iran-allied Hezbollah a terrorist organization.

Israel already has developed a natural gas industry elsewhere in its economic waters, producing enough gas for domestic consumption and to export to neighboring Egypt and Jordan.

Local media, including the English-language Daily Star, reported that the Lebanese side was adopting a “maximalist stance.” It said Lebanon was pushing for the additional square kilometers to be included in Lebanese territory on top of the already disputed 860 square kilometer- (330 square mile-) area of the Mediterranean Sea which each side claims as being within their own exclusive economic zones.

The local Al-Jadeed station called the talks serious and “very heated,” adding that the Lebanese delegation’s ceiling is the highest it has been and that there are “fundamental disputes on the starting point.”

The US-mediated talks are being held in a tent at a U.N. post along the border known as Ras Naqoura, on the edge of the Lebanese border town of Naqoura.

Lebanon insists the talks are purely technical and not a sign of any normalization of ties. The Lebanese delegation speaks through U.N. and US officials to the Israelis.

Israel has cast the talks in a different light. During a tour of northern Israel on Tuesday, Defense Minister Benny Gantz referred to “positive voices coming out of Lebanon, who are even talking about peace with Israel, who are working with us on things like determining maritime borders.” He did not elaborate.

Israel’s Energy Minister Yuval Steinitz released a statement Tuesday saying that Wednesday’s meeting would be attended by American diplomat and mediator John Desrocher. He said the Israeli delegation would examine the possibility of reaching an agreement on the determination of the maritime border between the countries in a way that will enable the development of natural resources in the region.

On Wednesday, his office said the Israeli team updated Steinitz, who instructed them to continue talks Thursday.

Israel and Lebanon have no diplomatic relations and are technically in a state of war. Lebanon, which began offshore drilling earlier this year and hopes to start drilling for gas in the disputed area in the coming months, has divided its expanse of waters into 10 blocs, of which three are in the area under dispute with Israel.

Even as the maritime talks proceed, Israel has been conducting a large-scale military exercise along its northern border with Lebanon this week simulating war with Hezbollah.

“Even during the coronavirus, our enemies are not stagnant and neither are we. In this exercise I have been impressed by the vast improvement in the IDF’s offensive capabilities and Hezbollah and Lebanon would do well to take this into account,” he said.

“Whoever attacks us will meet firepower and a steel fist that will destroy any enemy.”

Image; FILE – In this Oct. 14, 2020 file photo, a helicopter flies over a base of the U.N. peacekeeping force, in the southern town of Naqoura, Lebanon. On Wednesday, Oct. 28, 2020, Lebanon and Israel held a second round of US-mediated talks over their disputed maritime border and agreed on a third meeting. The US-mediated talks are being held in a tent at the U.N. post along the border known as Ras Naqoura, on the edge of the Lebanese border town of Naqoura. (AP Photo/Bilal Hussein, File)

Lebanese divided over hopes for wider peace with Israel