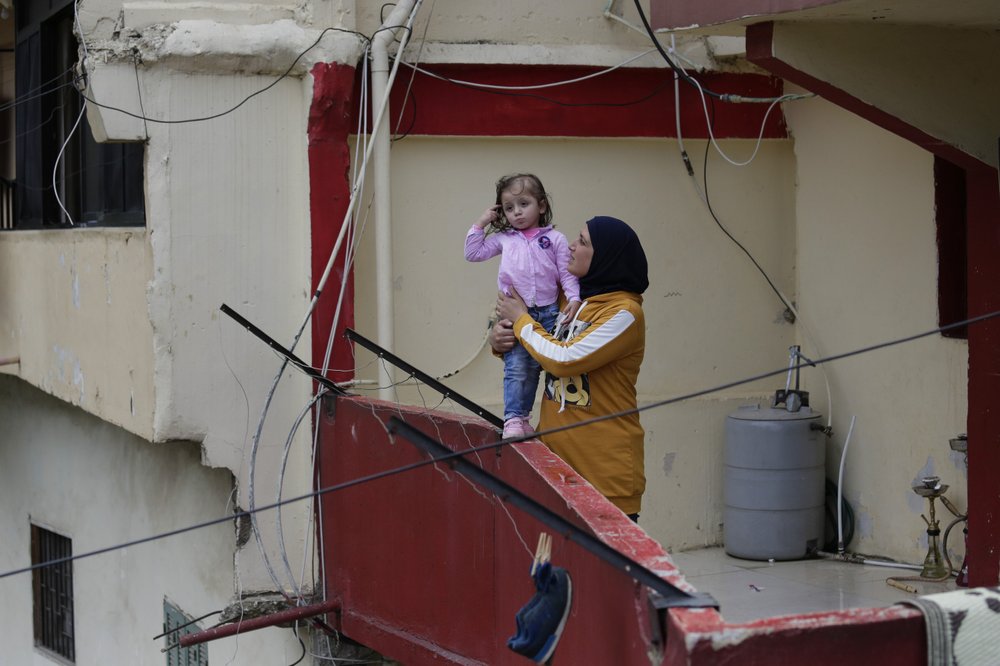 TRIPOLI, Lebanon (AP) — Living in a slum built precariously on the banks of a sewage-tainted river in Lebanon, Faiqqa Homsi feels her family being pushed closer and closer to the edge.

A mother of five, she was already struggling, relying on donations to care for a baby daughter with cancer. The coronavirus shutdown cost her husband his meager income driving a school bus. She hoped to earn some change selling carrot juice after a charity gave her a juicer. But as Lebanon’s currency collapsed, carrots became too expensive.

“It is all closing in our face,” Homsi said.

Lebanese are growing more desperate as jobs disappear and their money’s value evaporates in a terrifying confluence of events. An unprecedented economic crisis, nationwide protests and coronavirus pose the biggest threat to stability since the end of the civil war in 1990, and there are fears of a new slide into violence.

Nowhere is the despair deeper than in Tripoli, Homsi’s hometown and Lebanon’s poorest city. Overwhelmingly Sunni Muslim and home to over 700,000 people, Tripoli has suffered years of neglect and is stigmatized with violence and extremism. Mounting poverty is turning it into a powder keg.

Even before the crises, almost the entire city’s workforce depended on day-to-day income, and 60 percent of them made less than one dollar a day. More than half of the families were in the poorest classification, lacking basic services, education and health care, said Suheir Ghali, a university professor who carried out a study of Tripoli.

Things will get worse as Lebanon’s economy contracts. Already 45 percent of the country’s population is below the poverty line. The currency has lost nearly 60 percent of its value to the dollar. Unemployment has risen to 35 percent, nearly double the current US figures rivaling the Great Depression.

Divisions among Lebanon’s sectarian leadership hamper attempts to address the crisis. Hezbollah, which dominates the government, reluctantly supported plans to seek help from the International Monetary Fund, a sign of its concern about widening hardships. IMF support will likely mean cuts in the public sector, the largest employer, likely to cause squabbling among political factions. The prime minister, a Sunni, has Hezbollah’s backing but little within his own sect or in Tripoli.

Tripoli was thrust into the forefront of the anti-government protests that first broke out in October. Its boisterous rallies inspired other protesters, who called it the “bride” of the uprising.

Protests returned late last month, more furious and violent, targeting banks. A protester was killed in Tripoli when the army broke up a rally.

“The risk that things might go on a downward spiral (in Tripoli) is real,” said Nasser Yassin, a professor of policy planning at the American University of Beirut.

Tripoli has been the scene of some of Lebanon’s worst violence since the civil war’s end. For weeks in 2007, Islamists battled troops north of the city. The uprising in Syria reignited a bloody rivalry between some of Tripoli’s Sunni and Alawite residents, who belong to the same sect as Syria’s leadership.

Syria’s war — now in its 10th year — stripped Tripoli of its strong trade ties with Syria, a key lifeline. Hundreds of thousands of Syrian refugees have moved into Tripoli and surrounding areas.

Residents are also bitter over grand promises that never materialize from rival Sunni politicians vying for their support. Development of Tripoli’s port, a hoped-for gateway for rebuilding post-war Syria, never picked up. A trade fairground designed by Brazilian architect Oscar Niemeyer in the 1960s remains abandoned. At a crafts market project, workshops are shutting down one after the other.

Homsi broke into tears when she saw a woman, the age of her mother-in-law, pushed around in a line for food stamps.

Homsi lives in Mulawiya, an illegal favela-like settlement of narrow alleys and ramshackle houses built on top of each other up the steep banks of Abu Ali River. Homsi’s family is crammed into two bedrooms — the kids sleeping in bunk beds next to the kitchen. A large collection of tea and coffee cups — part of her wedding trousseau — is neatly stacked on the kitchen shelves.

Her daughter Maya was diagnosed with cancer as a newborn three years ago. Homsi takes her twice a month to Beirut, a 90-minute bus ride, to a hospital where her treatment is paid for by philanthropists. The little girl has lost half her hair from the chemo and radiotherapy.

Homsi’s eldest son, now 17, dropped out of school to help the family. A fifth of her husband’s $340-a-month salary went for the trip to Beirut. Now that income is gone.

“I try as best as I can. Sometimes it is at the expense of the other children. It is not because I am harsh, but because there are things I can’t secure,” she said. It took her weeks to fix her seven-year-old son’s broken glasses.

Nearby Bab al-Tebanneh, one of Tripoli’s poorest slums, has always been a destination for Lebanese to fix a broken car or wooden door at low cost.

On an early afternoon this week, a mini-mart was nearly empty. A produce vendor, Mohamed Harou, said he doesn’t display fruit because no one can afford it. His friend, Ibrahim Abdulla, a scrap metal dealer, idled outside his shop with no work.

No one in the market wore a face mask or gloves.

Harou, 54, said a local politician used to pay for his daughters’ education, but then stopped after the 2018 parliament elections. “They don’t need us now,” he said.

Abdulla predicted that more chaos was coming. Smashing banks “was just a poke. Imagine when the balloon explodes.”

Linda Borghol, an activist, started a soup kitchen during the protests. She negotiated to keep it going after the protest camp was broken up.

She now distributes 600 meals a day to the poor.

“We are heading toward a famine. I want to be there, even if with something this small,” she said.

Image: In this Tuesday, May 5, 2020 photo, Faiqqa Homsi holds her daughter Maya, who was diagnosed with cancer, on her apartment balcony in the Mulawiya slum of the northern city of Tripoli, Lebanon. Residents of Lebanon’s poorest city, Tripoli, despair as the country faces a terrifying confluence of events. An unprecedented economic crisis, nationwide protests and coronavirus restrictions are posing the biggest threat to stability since the end of the civil war in 1990. Nowhere is the pain more felt than in Tripoli, hometown of Homsi, a mother of five who feels her family is being pushed closer to the edge. (AP Photo/Hassan Ammar)