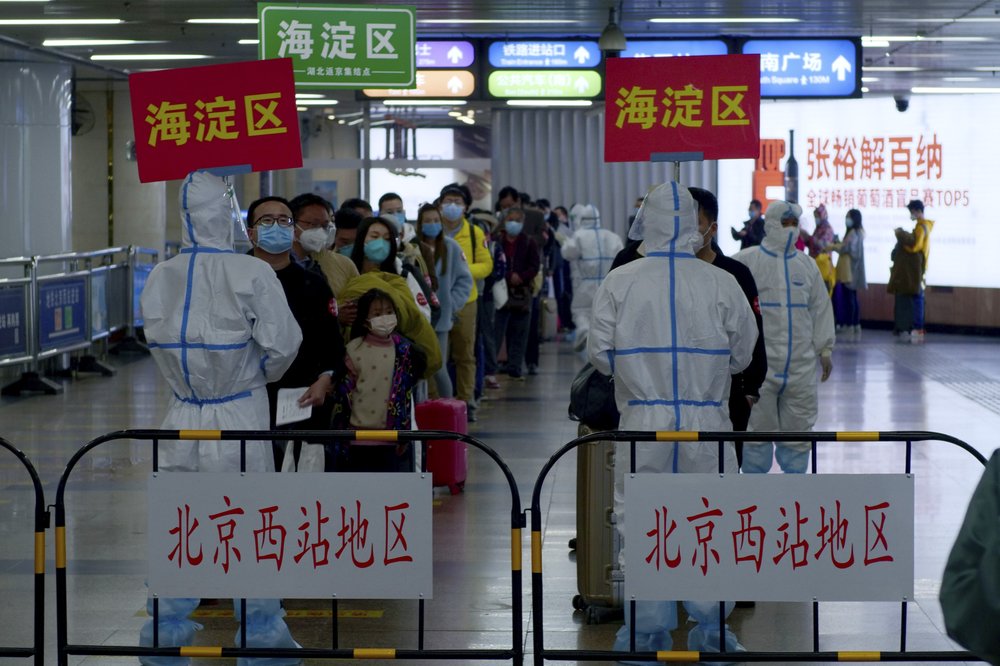 BEIJING (AP) — Getting into Wuhan was the easy part.

New virus infections had fallen to almost zero and travel restrictions were easing. As a 76-day lockdown neared its end, journalists and others were allowed to enter the city in central China where the global pandemic started.

Getting out was more challenging. Hundreds of thousands of people were also trying to leave after being stuck for months in the metropolis of 11 million. The bureaucracy had yet to finalize how they would safely organize their return. Three official documents were needed: A green health code, home neighborhood approval and a recent nucleic acid test.

Wuhan has gained notoriety as the origin of the disease but it has a long history as a fulcrum of change in China, a nation 1.4 billion and the world’s second largest economy.

On Oct. 10, 1911, an “outbreak of serious revolutionary movement” erupted in the port city spread on either side of the Yangtze, China’s mightiest river. As word spread, Associated Press correspondent J.R. Kennedy left Tokyo for Shanghai, then traveled upriver to cover the uprising against the Manchu empire. Another reporter traveled with soldiers sent from Beijing to crush it.

“The city was a scene of desolation,” read one AP report. “Corpses piled everywhere,” said another.

Insurgencies soon broke out across China, and the tumultuous decades that followed saw occupation by Japan, civil war, and the victory of the Chinese Communist Party in 1949.

In 2020, international journalists came back to see once again how events in Wuhan might shape the entire world.

Few hotels were accepting foreigners and each neighborhood had different regulations. Some forced multiple nucleic acid tests on journalists and 48 hours of quarantine.

Ours did not, and as the final hours closed on Wuhan’s lockdown, AP video producer Olivia Zhang and I climbed atop the steel 1957 Wuhan Yangtze River Bridge to watch the countdown.

Skyscrapers and bridges radiated animated images of health workers aiding patients, along with one building displaying the words “heroic city,” a title bestowed on Wuhan by President Xi Jinping.

One recently freed resident told us, “I haven’t been outside for more than 70 days. […] Being indoors for so long drove me crazy.” He seemed shell-shocked, yet happy.

The next day we went to Hankou Railway Station and filmed the first train departing for Beijing. In between government-arranged media trips over subsequent days, I donned a mask, laced up and ran to the river. The sky was icy blue, the air warm. A guard let me into a riverside park, but only after checking my phone for the green health code.

A green code is now required for most public life in China — a reminder of the state’s constant data surveillance.

People thronged the riverbank, all wearing masks; parents with children finally free to run and shout, nurses, fishermen, amorous couples and other joggers passing as I took photos of the spring sunlight.

Before returning to Beijing there was a ritual. The first stop was a local hospital where we stepped through a box of grey decontaminant gas similar to an airlock. We then paid about US$40 to spit in a test tube that would return results in 48 hours.

Neighborhood permission was harder. Some allowed home quarantine, others required returnees to spend about $700 on a 14-day quarantine in small hotel rooms. Catering is reportedly adequate.

With a green health code and neighborhood permission, people could then apply to Beijing’s city government for permission to return home. Success came in the form of a phone message with a secret purchasing link when a ticket became available. The link expired in two hours.

Back in Beijing, officials in white protective outfits herded us through biosecurity checks at the railway station and a commandeered city park that separated passengers into smaller and smaller groups based on their destination.

Three hours later, a government-chartered bus dropped me off at my apartment complex. Two officials in street clothes took me to my door where I signed a paper pledging that I would stay inside and record my temperature for 14 days. A new poster on my door implores my neighbors to help enforce the quarantine. An electronic sensor records any breaches.

As soon as I got home, I put my clothes in the wash and myself in the shower, thanking my wife for volunteering to quarantine with me and handing me a cold drink.

Eventually we will undergo nucleic acid tests to prove we’re virus-free, but no symptoms have appeared so far.

A cool breeze blows in from our windows as the last days of springs slowly pass.

Image: In this April 15, 2020 photo, passengers from Wuhan stand in lines designating where they will quarantine in Beijing. Getting into Wuhan was the easy part as new infections had fallen to almost zero and travel restrictions were relaxed. As a 76-day lockdown neared its end, journalists were allowed to return to the Chinese city where the coronavirus pandemic originated. But getting out was proving harder. The bureaucracy had yet to finalize how people would safely organize their return and three official documents were needed: A green health code, home neighborhood approval and a recent nucleic acid test. (AP Photo/Sam McNeil)