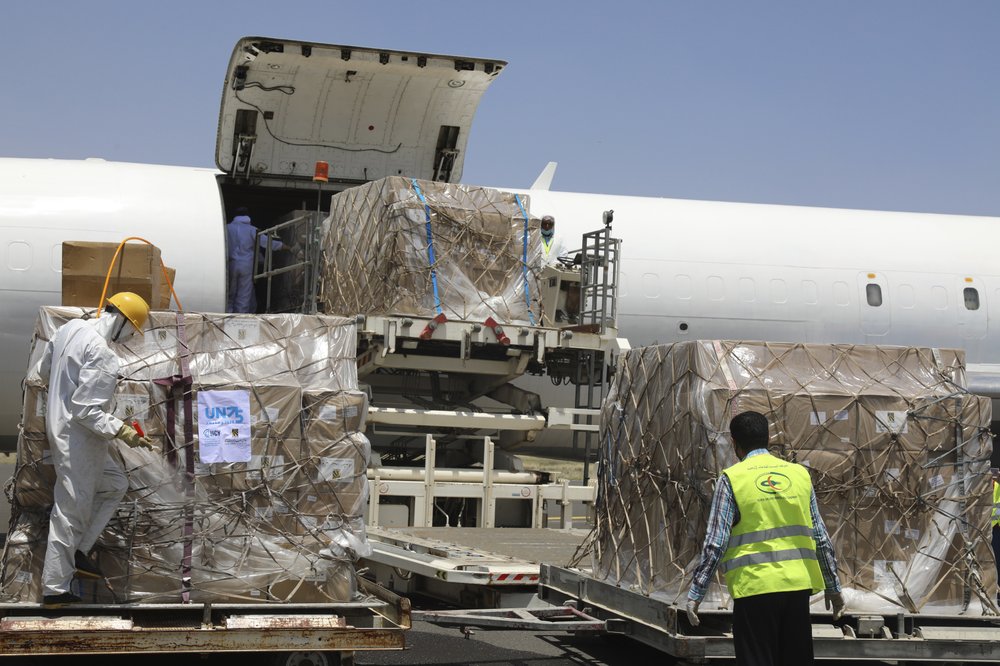 The last of three large shipments of medical supplies landed in Yemen on Friday, organizers of the cargo flights said, following a joint initiative by the world organization and multinational corporations to boost the war-devastated country’s health care system as it battles the coronavirus.

The shipments represent a different path to humanitarian relief in Yemen as the UN faces a drastic shortage of funds for its operations, even with the virus surging across the Arab world’s poorest country.

“It’s very important that we as a private sector help the public health authorities in their work on the ground,” said Mohamed Nabil Hayel Saeed, a spokesman for the initiative. “The world must not forget Yemen at this time while they’re fighting the virus.”

Friday’s batch followed two earlier shipments from the joint initiative, on Wednesday and Thursday, that each had more than 14 tons of items, including ventilators, coronavirus test kits and personal protective equipment.

A UN humanitarian appeal for Yemen this month fell one billion US dollars short of what aid agencies needed. Some 75 percent of UN programs for the country, covering essentially every sector, from food to health care and nutrition, have shut their doors or reduced operations. The World Food Program had to cut rations in half and UN-funded health services were reduced in nearly 200 hospitals nationwide.

The Hayel Saeed Anam Foundation, the charity arm of the Yemeni-owned conglomerate by the same name which produces cooking oil and other foodstuffs, helped create the International Initiative on COVID-19 in Yemen. The partnership brings together UN agencies with a host of companies, including Swiss food packaging giant Tetra Pak and Unilever, the maker of Hellmann’s mayonnaise and Dove soap, among other products.

It’s an unusual effort to bring crisis-stricken Yemen back from the brink of further disaster, as the virus overwhelms Yemen’s hospitals.

The number of people dying from COVID-19 has dramatically spiked nationwide. Testing remains limited, with the country conducting just 31 tests per one million people, among the world’s lowest scores, according to the International Rescue Committee.

Friday’s air delivery is expected to increase Yemen’s ability to perform coronavirus tests by some 50,000 people per week.

Earlier this week, three airplanes loaded with a total of 43 tons of aid from China touched down in the capital, Sanaa and the southern city of Aden, for UN-led distribution to hospitals and labs. The 426 ventilators, one million pieces of protective equipment and 34,000 COVID-19 test kits aim to support a health system now functioning at 50 percent capacity, after five years of brutal conflict between Iran-backed Houthi rebels and a Saudi-led coalition, which backs forces fighting on behalf of Yemen’s internationally recognized government.

The cargo arrives as other aid groups hurry to get supplies into the country. On Thursday, UNICEF announced it had shipped 10,000 COVID-19 testing kits to the capital. In a statement, it said an additional 8,000 test kits are expected to arrive in Aden in the coming days.

Long before the pandemic hit, the UN labeled Yemen as the world’s worst humanitarian crisis, with 10 million people near famine and 80 percent of the country’s 30 million population in need of aid. But the UN and donor nations have criticized parties to the conflict in the past for not allowing the free flow of aid to those who need it most.

The Houthis, who control Yemen’s capital and much of the country’s north, have restricted UN aid delivery programs in the country — a tactic to force the agencies to give them greater control over the massive humanitarian campaign. Donors’ concerns over Houthi interference was among the top reasons for the funding shortfall this year.

“For millions of Yemenis, aid is a matter of survival, but humanitarian organizations here regularly encounter challenges, red tape and delays in delivering food, water and other support,” said Riona McCormack, spokeswoman for the Norwegian Refugee Council in Yemen.

But organizers say the delivery is a small but urgently needed step for a health system in disarray.

“Support needs to be kept up,” said Saeed. “Yemen is in a dire situation.”

By ISABEL DEBRE and MAGGIE HYDE

Image: In this Wednesday, June 17, 2020, workers unload boxes of medical supplies on arrival at Sanaa International Airport in Sanaa, Yemen. The shipment includes ventilators, coronavirus test kits, PCR machines and personal protective equipment. Organized by the United Nations and private companies, it comes as the UN is facing a funding shortage for its operations in the war-torn country, where officials and medical experts fear the coronavirus could be spreading unchecked due to limited medical facilities. (World Health Organization via AP)