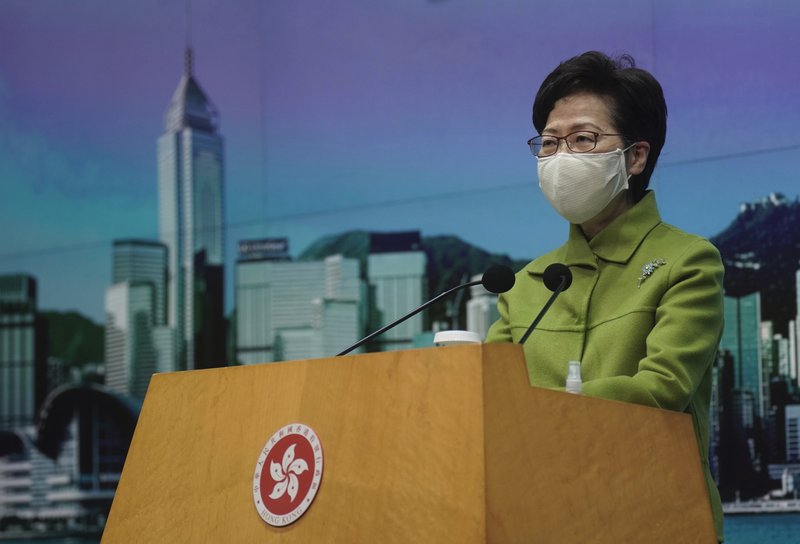 Her comments came a day after a top Beijing official signaled major changes would be coming to ensure is run by “patriots,” a clear sign that China intends to no longer tolerate dissenting voices, 23 years after the former British colony was handed over to Chinese rule with a promise it could maintain its own rights and freedoms for 50 years.

Following China’s imposition of a sweeping national security law on the city last year, authorities have moved to expel members of the city’s Legislative Council deemed insufficiently loyal and rounded up veteran opposition leaders on charges including illegal assembly and colluding with foreign forces. Government critics and Western governments accuse Beijing of going back on its word and effectively ending the “one country, two systems” framework for governing the dynamic Asian financial hub.

Lam said political strife and unrest in the city, including anti-government protests in 2019 as well as protests in 2014, showed there were always some people who are “rather hostile” to the central authorities in China.

“I can understand that the central authorities are very concerned, they do not want the situation to deteriorate further in such a way that ‘one country, two systems’ cannot be implemented,” Lam said at a regular news briefing.

A day earlier, Xia Baolong, director of Hong Kong and Macao Affairs Office of the State Council, said Hong Kong could only be ruled by “patriots,” which exclude those who lobby other countries for foreign sanctions or “troublemakers.”

The electoral changes are expected to be discussed and possibly passed at next month’s meeting of the National People’s Congress, China’s rubber-stamp legislature, and its advisory body, the Chinese People’s Political Consultative Conference.

They will likely take the form of a redistribution of votes in the 1,200-member electoral commission that selects Hong Kong’s chief executive, subject to Beijing’s veto. The commission is composed of voting blocs intended to represent Hong Kong’s various economic, educational and social sectors, along with its largely Beijing-dominated political institutions.

The one exception are the 117 commission members drawn from among the city’s 458 local district counselors, most of whom are directly elected by their constituents and tend to be more politically independent. Opposition figures swept district council elections following the 2019 protests and the Beijing authorities have since sought to prevent them from exerting influence on other aspects of the political system.

With all other commission members deemed to be firmly under Beijing’s control, speculation has risen that the 117 district council votes will be transferred to another bloc, possibly that of Hong Kong’s representatives to the Chinese People’s Political Consultative Conference, ensuring that they will follow Beijing’s directives.

It remains unclear whether Lam, who is deeply unpopular among Hong Kong’s population, will seek a second five-year term in next year’s poll.

Another possibility is that China will close what it calls “loopholes” in the election for members of the Legislative Council, now entirely dominated by pro-Beijing legislators since opposition deputies resigned en masse last year after four were expelled for being insufficiently loyal to the government. Lam postponed elections for the council last year, citing concerns over COVID-19, in a move largely seen as designed to prevent an opposition victory.

Of the 70 members of the council, half are directly elected from geographic constituencies while the rest are drawn from trade and other special interest groups. Changes could include preventing district counselors from also sitting in the body or simply raising the requirements for loyalty and patriotism above the already stringent levels they are set at now.