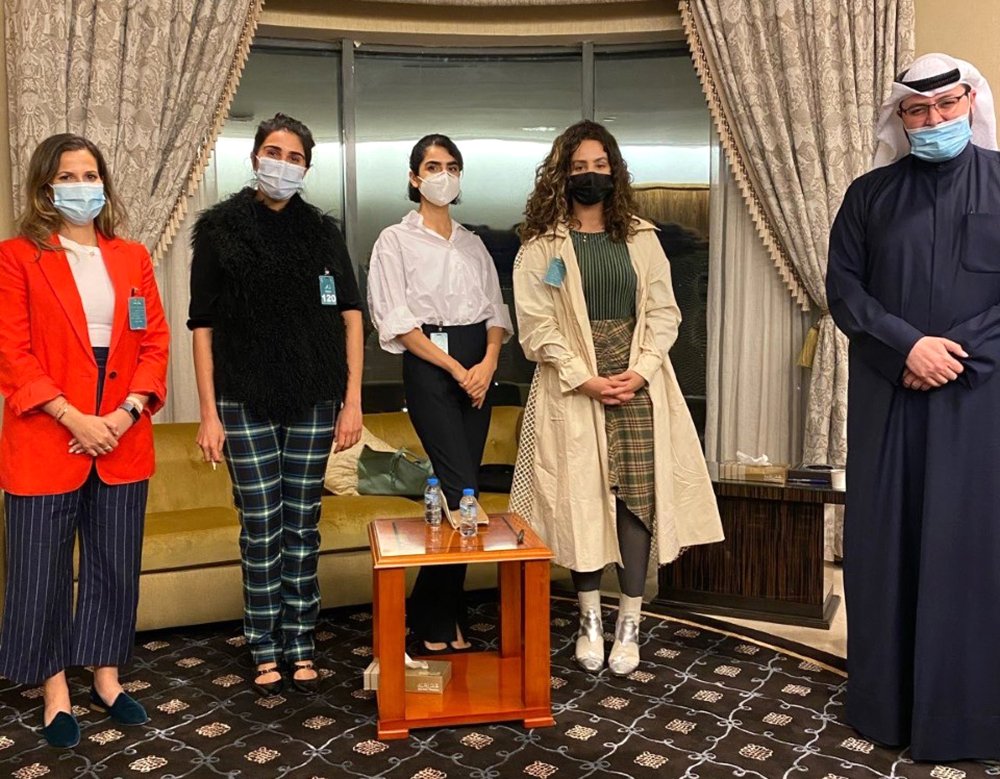 DUBAI, United Arab Emirates (AP) — Abrar Zenkawi was cruising toward the beach in Kuwait City when she saw a man waving and smiling in her rearview mirror.

Elsewhere, this may have been a benign highway flirtation. But in Kuwait, it’s a haunting routine that often turns dangerous. The man pulled up beside her, inched closer and finally drove into her. Zenkawi’s car, carrying her toddler nieces, sister and friend, flipped six times.

“It’s considered normal here. Men always drive way too close to scare girls, chase them to their homes, follow them to work, just for fun,” said Zenkawi, 34, who spent months in the hospital with a shattered spine. “They don’t think about the consequences.”

But that may be changing as women are increasingly challenging Kuwait’s deeply patriarchal society. In recent weeks, a growing number of women have broken taboos to speak out about the scourge of harassment and violence that plagues the Gulf nation’s streets, highways and malls, in an echo of the global #MeToo movement.

An Instagram page has led to an outpouring of testimony from women fed up with being intimidated or attacked in a country where the criminal code doesn’t define sexual harassment and lays out few repercussions for men who kill female relatives for actions they consider immoral. A wide variety of news and talk shows have taken up the subject of harassment for the first time. And one journalist used a hidden camera to document how women are treated in the streets.

The spark may have come from fashion blogger Ascia al-Faraj, who vented in January on Snapchat to her millions of followers after being hounded by a man in a speeding car. In such episodes, men often try to “bump” a woman’s car, but many serious accidents result, as in Zenkawi’s case.

“It’s terrifying, all the time you’re feeling so unsafe in your own skin,” al-Faraj told The Associated Press. “The responsibility is always on us. … We must have had our music too loud or our windows down.”

Shayma Shamo, a 27-year-old doctor, sought to seize the momentum of al-Faraj’s viral video, creating an Instagram page called “Lan Asket,” Arabic for “I will not be silent.”

Shamo’s rage had been building for weeks. In December, a female employee of Kuwait’s Parliament was stabbed to death by her 17-year-old brother, reportedly because he didn’t want her working as a security guard. It was the third such case — described as “honor killings” — to make headlines in as many months. The National Assembly, all-male despite a record number of female candidates in the recent election, offered none of the customary condolences.

“The silence was deafening,” Shamo said. “I thought, OK, that could happen to me, and anyone could get away with it.”

Kuwait, unlike other oil-rich Persian Gulf sheikhdoms, has a legislature with genuine power and some tolerance for political dissent. But restrictions to slow the the spread of the coronavirus prevented Shamo from staging a protest and forced her to take her grievances online, as women in the region’s more repressive countries have done recently.

From there, the conversation moved to traditional media. A well-known female journalist at state-linked al-Qabas newspaper went out at night with a hidden camera and captured motorbike riders recklessly trying to catch her attention, men yelling sexual slurs on the street and strangers pulling the hair of female passersby — offering proof to millions in Kuwait of the harassment women were describing.

“It seems rudimentary, but we’ve never had these discussions before,” said Najeeba Hayat, who helped organize the Lan Asket campaign, which is also training bus drivers to report harassment, organizing an ad campaign to raise awareness and creating an app that allows women to anonymously report abuse to police. “Every single girl has kept this in her chest for so long.”

As the movement gained steam, lawmakers scrambled to respond. Seven politicians, from conservative Islamists to stalwart liberals, submitted amendments to the penal code last month that would define and punish sexual harassment, including one that called for a $10,000 fine and one-year prison sentence.

“The Kuwaiti penal code doesn’t cover harassment, there are just some laws that cover immorality that are so vague that women can’t go and report to the local police,” said Abdulaziz al-Saqabi, a conservative who was among those who drafted amendments.

But women’s rights activists, whose input the lawmakers did not solicit, are skeptical that the proposals will result in significant change, especially with the nation in the midst of a financial crisis and with Parliament now suspended because of a political standoff.

The frustration is familiar for activist Nour al-Mukhled. For years, she and other women have struggled to abolish a law that classifies the killing of adulterous women by their fathers, brothers or husbands as a misdemeanor and sets the maximum penalty at three years in prison. Such leniency remains common across the Gulf, although the United Arab Emirates criminalized “honor killings” last fall.

Kuwait also has statues that let kidnappers evade punishment by marrying their victims and empower men to “discipline” their female relatives with assault.

“In Kuwait, there can be no legal change without cultural change, and this is still culturally acceptable,” al-Mukhled said. Only in August did Parliament pass a law that opened shelters for victims of domestic abuse.

But progress is happening outside of official circles, activists say. In recent weeks, a growing number of female collectives have sprung up, in homes and on Zoom — a mirror to the custom of the “diwanyia,” gentlemen’s clubs that often vault men to top jobs. Women also have turned to Clubhouse, the buzzy app that lets people gather in audio chat rooms, to hold discussions of sexual assault and harassment.

The horizon for equality may be far off, but campaigners say their ambitions are modest in the short term.

“Right now, attempted murder is considered ‘flirting,’” said Hayat, one of the organizers of the Lan Asket campaign. “We just want to be treated like human beings, not as aliens and not as prey.”

Image: In this March 4, 2021, photo provided by the Lan Asket campaign, the founders, from left, Lina al-Qaddoumi, Najeeba Hayat, Shayma Shamo and Ascia al-Faraj, stand beside Abdulaziz al-Saqabi, one of the Kuwaiti politicians who has proposed an amendment to the penal code to define and punish sexual harassment in Kuwait City, Kuwait. (Lan Asket via AP)

Could Egypt's #MeToo movement be the tinder for a 'feminist revolution'?

The new face of Egypt's parliament: an 83-year-old female lawmaker