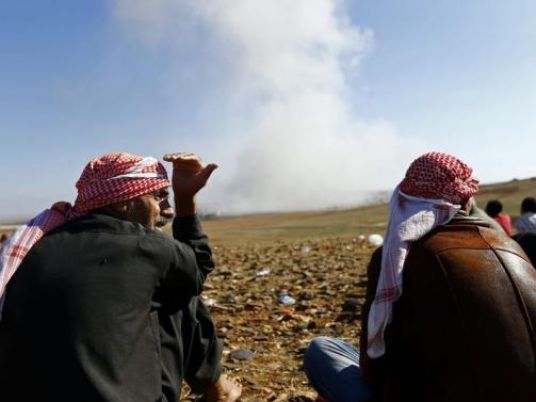 BEIRUT (Reuters) – Alarmed by a US decision to leave Syria, Kurds leaders who run much of the north are urging Russia and its ally Damascus to send forces to shield the border from the threat of a Turkish offensive against the Kurds.

Their call for a return of Syrian government forces to the border, which Kurdish fighters have held for years, points to the depth of their crisis in the wake of US President Donald Trump’s abrupt decision to withdraw forces.

While little has changed on the ground yet – US forces are still deployed and Trump says the pullout will be slow – Kurds are scrambling for a strategy to protect their region from Turkey before the United States leaves.

Talks with Damascus and Moscow appear to be the focus for the Kurdish leadership. Their worst fear is a repeat of a Turkish attack that drove Kurds and the YPG militia out of Afrin city in the northwest earlier this year.

They are also trying to convince other Western countries to fill the vacuum when Washington withdraws some 2,000 troops whose presence in northern and eastern Syria has deterred Turkey so far.

The territory at stake spans about a quarter of Syria, most of it east of the Euphrates River, controlled by the Syrian Democratic Forces (SDF), an umbrella group dominated by the Kurdish YPG. The area borders Iraq to the east and includes three major cities – Qamishli, Hasaka and Raqqa.

The SDF has been Washington’s main Syrian partner in the fight with Islamic State, but Turkey views the YPG fighters that form its backbone as a threat and has vowed to crush them.

“Our contacts with Russia, and the regime, are to look for clear mechanisms to protect the northern border,” said Xelil, an architect of autonomy plans in northern Syria. “We want Russia to play an important role to achieve stability.”

President Bashar al-Assad, already in command of most of Syria with help from Iranian and Russian allies, has vowed to recover the SDF territory. The region, rich in oil, water and farmland, is seen as important to Syria’s reconstruction.

Although the autonomy they seek is at odds with Damascus, the Kurds have largely avoided direct conflict with the government during the war, at times even fighting common foes. They held political talks this summer that went nowhere.

But with their negotiating position severely weakened by Trump’s move, the Kurds may be in a race against time to cut a deal as Turkey threatens to launch its offensive east of the Euphrates River.

Turkey views the YPG as an extension of the outlawed Kurdish PKK movement which has been waging a 34-year-long insurgency in southeastern Turkey. Ankara has drawn on Syrian rebel proxies to help fight the YPG in the north.

Fearing the US announcement could open the way to the Turkish attack, the SDF has been warning of the threat Islamic State still poses. It has cautioned European states that foreign Islamic State jihadists in its prisons could escape and return to mount attacks at home.

“To repel a Turkish attack, we are discussing various options … We have made contact with Russia, France and European Union countries to help,” said Badran Jia Kurd, a senior Kurdish official who went to Moscow last week for talks with Russian foreign ministry officials.

“It is the responsibility of the Syrian government to protect the borders of this region and this is under discussion,” he told Reuters.

In Turkey’s last assault in Afrin earlier this year, the SDF felt let down by Russia, believing it had given assurances that Turkey would not attack the region.

Turkey-backed Syrian rebels say they have been mobilizing to launch the next offensive, with their first target the town of Manbij that borders the territory under their control.

US forces are still patrolling near Manbij and nothing has changed so far, said Sharfan Darwish, spokesman for the SDF-allied Manbij Military Council that holds the town. But in coordination with the council, the government and Russia sent forces near the town on Tuesday, he said.

“We are now in the phase of launching a new initiative,” she told a tribal meeting in Raqqa on Wednesday. “We will try by all means to put pressure on this regime to carry out a political settlement so that we preserve the dignity of Syrian citizens.”