Few expected the landmark decision by Kenya’s top court to invalidate the Aug. 8 election victory by President Uhuru Kenyatta and order a new vote, an extraordinary turnaround that some observers believe could positively reverberate across Africa and even beyond.

The role of the courts as a recourse for those who suspect an election was tainted by fraud or other problems is meant to bolster the democratic process, but many judges can be subject to political pressure and the temptation to favor perceived stability over uncertainty. The fact that Kenya’s Supreme Court bucked the trend on Friday shows independence in the judicial system of the East African economic power that has been in question in the past.

“In the African context, it’s very rare to see a court ruling against the incumbent even when processes are more or less free and fair. The state machinery usually tends to favor whoever is in charge and rule against the opposition,” said Yarik Turianskyi, a governance expert at the South African Institute of International Affairs, a research institute based in Johannesburg.

“I think it creates a lot of expectations for the region, for the continent, sending out a very positive example,” Turianskyi said. “And then next time something like this happens, everybody will be mentioning this example and hoping that due process will also be followed up.”

Such expectations will face a tough test, particularly in countries that have more state control than Kenya, whose 2010 constitution is considered to be among the most progressive in Africa despite the ethnic allegiances and personality politics that overshadow its democracy.

In Angola, the opposition UNITA party and a smaller opposition group are contesting provisional results from the Aug. 23 vote that gave the win to the ruling MPLA party, which said Defense Minister Joao Lourenco will succeed President Jose Eduardo dos Santos after his 38-year rule. Angola’s electoral panel says it is assessing opposition complaints that legal procedures were flouted in a country where human rights groups have long accused the government of silencing dissenting voices.

Some African nations face .more severe challenges, even if votes are held more often and in many cases are seen to be less vulnerable to manipulation than in past decades.

Tensions are growing in Congo after officials failed to organize elections late last year. A deal brokered by the Catholic church calls for the vote to be held this year, but Congo’s electoral commission has indicated that the deadline will not be met.

Kenya’s surprise court ruling came after longtime opposition candidate Raila Odinga alleged that last month’s vote was manipulated. He challenged the results despite intense pressure from business leaders and others to concede defeat and let the country resume normal life.

The court’s decision in Odinga’s favor, unprecedented in Africa, was all the more surprising because judges threw out his challenge after he lost to Kenyatta in the 2013 election.

Friday’s court ruling that there were “illegalities and irregularities” in last month’s election calls for a re-run within 60 days. It is, election experts say, an opportunity for Kenya to get it right this time.

Kenya’s election commission should organize the new election in a way that “promotes transparency, accountability and is verifiable,” and political parties as well as the government and security forces should ensure a credible, peaceful process, said the National Democratic Institute, a non-profit group based in Washington.

In his first public comments after the court ruling, Kenyatta criticized the decision but said he respects it and called for calm in a country where some elections have been followed by deadly violence.

But in comments since then, Kenyatta has called the court’s judges “crooks” and accused them of overturning the will of the people, which has alarmed some observers who see the statements as an attack on judicial independence.

There are rare examples of African courts stepping in and changing the course of an election in the past.

The 2010 presidential election in Ivory Coast, where some 3,000 people were killed after then-President Laurent Gbagbo refused to concede defeat, was an example of how things can go wrong when state institutions are sidestepped or subject to manipulation. The election commission had declared opposition leader Alassane Ouattara as the winner, but the head of the country’s constitutional council ruled for Gbagbo. Ouattara eventually became president, and Gbagbo was arrested after international forces intervened.

Elsewhere in Africa, some opposition leaders have expressed faith in independent courts as a potential source of reform.

In Zambia, once-praised democratic institutions have come under scrutiny since President Edgar Lungu was re-elected last year in a disputed contest. Treason charges were recently dropped against main opposition leader Hakainde Hichilema. On Thursday during a visit to South Africa, Hichilema said Zambia needs an independent electoral commission “if democracy is to be resuscitated.”

Hundreds of elephants, wildebeests and zebras dead in Kenya amid prolonged drought 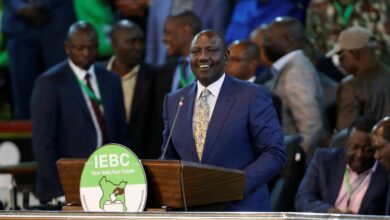