Every since I was a little girl, I have had to put up with men touching me and insulting me in the streets of Kabul. And of course, as I grew up, it became worse. This happens to all women here.

I told myself that I should react, fight back and answer their verbal abuse. But how many times a day could I fight this exhausting fight? Reality was more powerful than I was. So I decided to put on a street performance to show men that their behaviour is indecent, and to show society what women have to put up with every day.

I did this a week ago [on Friday February 26]. I went out at about 6pm in Kote Sangi, Kabul’s most populated neighborhood. I walk through Kote Sangi every day; women are frequently harassed there. Before I started, I prayed that I wouldn’t get chased down and killed by a hostile crowd. Unfortunately, my fears were well-founded – after a few minutes during which men in the street just seemed stunned, they started following me and insulting me. Some even started throwing rocks.

Nobody seemed to understand that what I was doing was an act of protest. I heard one little boy yell, “She’s covered herself in metal so nobody can touch her!” He was angry.

The only people who tried to defend me were a few friends and journalists who had come to see my performance. Men started punching us, kicking us. Some of my female friends told me that they were sexually molested by men in the crowd. 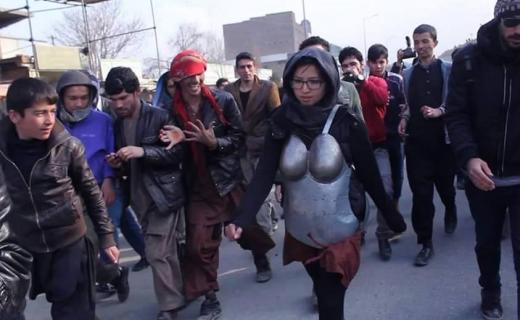 An Afghan artist walked through the streets of Kabul wearing metal armour in a bid to denounce sexual harassment.

I had planned on walking for 10 minutes, but after only 8 minutes, I had to run into a taxi. Young men continued to punch the car; the driver had to speed away.

A common tactic for men is to pinch women in the streets. They pinch us so hard it leaves bruises. These men are from all social classes: there are illiterates, students, rich men, poor men.

I think the Taliban’s reign and the 13 years of war that followed have destroyed our values and our culture. The rise of extremism and violence has created a lot of frustration, which leads to this type of deviant behavior.

We live in a patriarchal society, where women are seen as second-class citizens. When we complain about sexual harassment, men often say that if a woman wears a proper veil, nobody will bother her. But this is obviously false, since even women who wear a burqa get harassed in the streets. 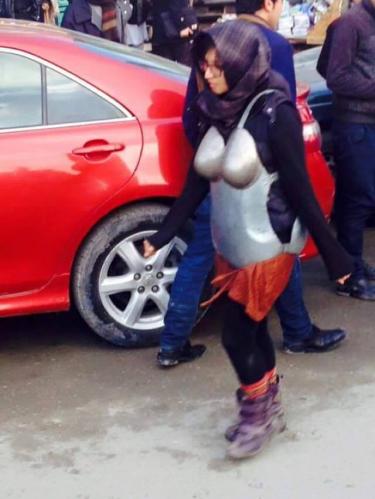 The government is not doing anything to stop this, and there’s no help available for the victims. We don’t even have a hotline to call. Families also bear their share of responsibility. A woman who is a victim of this type of abuse won’t dare talk about it to her father or her mother, for fear of disgracing them.

Women have to tear down this wall of silence. We must talk about this problem as much as possible and put pressure on the authorities to do something. If I don’t speak up now, one day my daughter will face this sort of harassment, and her daughter after her. My generation has to break this vicious cycle.

After my performance, angry men showed up at my door. Thankfully, I wasn’t home. I don’t feel safe anymore. I’m now hiding at friends’ homes in the suburbs of Kabul.

Sexual harassment is a major problem in Afghanistan. It has taken on such proportions that in October 2014, president Ashraf Ghani asked his government to come up with a plan to fight it, notably through education in schools.

The government’s spokesperson recently stated that every day, about 40 people are arrested for sexual harassment. However, these individuals are often released since laws against harassment do not yet exist in Afghanistan.